Where it started is anyone’s guess. Most would likely be hard pressed to recall the first time they heard it said. The adage so far remains able to stand the test of time.

‘The book is always better than the movie.’

It’s not true. Nothing is always true. In this case, it’s true often enough to feel like a fact even when acclaimed novels are transformed into acclaimed films. Is it really the case when it comes to one of the greatest pieces of fistic-themed art?

Author Leonard Gardner’s novel Fat City was published in 1969 and Gardner then had the opportunity to adapt the work for the big screen, writing the screenplay for John Houston’s film of the same name. Both are regarded today as classics. Rather than strictly review either, this installment of Boxing After Boxing compares the two works.

In his four-star review of the film in 1972, the late Roger Ebert succinctly summarized the plot in his lead paragraph:

Two men, barely 10 years apart in age, one with a lifetime of emptiness ahead of him, one with an empty lifetime already behind. This is what John Houston has to work with in "Fat City" and he treats it with a level, unsentimental honesty and makes it into one of his best films.

Fat City is unique in boxing fiction in part for what it is not. Fat City isn’t a story about the rise, seduction, and fall of a champion so popular when boxing leaned into noir. It isn’t a morality play like the Harder They Fall or the Alger-esque journey of an Italian Stallion. Fat City is about fighters who take up the craft namelessly with a low ceiling of potential, absorbing the same beatings and bruises for a few extra dollars and a delay in finding something else to do when their bodies can suffer no more.

The set-up remains the same in both the book and the movie and the dialogue is often verbatim throughout. Billy Tully, older than his years, heads to the gym after being out of the ring for some time. While working out, he spies a teenager named Ernie Munger. They briefly spar and Tully encourages Munger to seek out his former trainer, Nicholas Colasanto playing a coach before he was “Coach.” 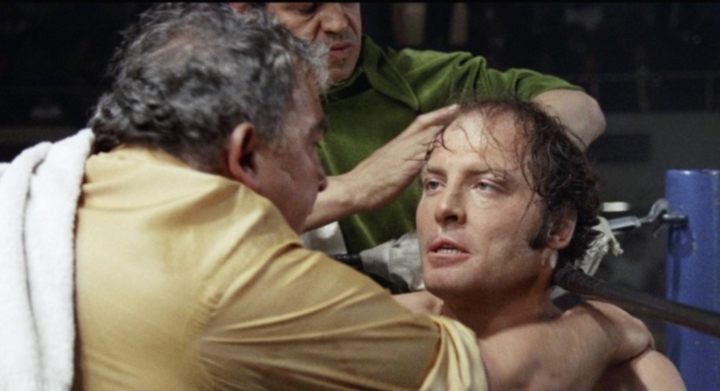 There are elements of the book that transform in the film. The book is set in Stockton, California in the late 1950s. The movie doesn’t distinguish a time period but the radio dial helps center it as contemporary to its release year. While Bridges spends time parked with his paramour, Candy Clark before greater fame and blonder hair in American Graffiti, we hear the question, “If a picture paints a thousand words, then why can’t I paint you?”

The AM dial wasn’t asking that in the 50s.

The story is otherwise intact. Munger maneuvers from amatuer to professional debut, interrupted along the way by marriage and a newborn. Tully, a barfly and farm worker pining for the wife that got away, takes up with a widow whose boyfriend is incarcerated and meanders toward a return to the ring. Munger debuts on the card.

The two juxtaposed fighters are played by Stacey Keach and Jeff Bridges, both still early in their film careers. Keach’s performance as Tully is wonderful. Tully looks like a man who sleeps in his clothes, his hair rarely combed, disinterested in wiping away the dust of central valley California all around him. Tully works just enough to get by and pay his tab. He calls himself a bum and holds Colasanto’s Ruben Lido responsible for his career going sideways when he was allowed to travel to Panama for a fight alone years earlier.

Bridges is clean cut in the role, notably dressing and grooming sharper. Fans of the film The Great White Hype will be reminded in the tale of Munger that the 1993 work wasn’t the first time they heard why the nickname “Irish” had value. In an early scene, Bridges asks his girlfriend not to touch him because he’s covered in mud. Munger doesn’t know what he wants, but he’s still too young to let go.

While the movie, like the book, shifts between Tully and Munger, bringing them together only occasionally, there is less balance in their stories in Houston’s telling. Tully’s story, the end of the road parable at play for both men, overwhelms the film version. Keach’s eyes, blank and unenthused to the point of tragedy even in victory, and his smile at the story of how another farm worker lost their wife to wine, are just two moments informing why that had to be an easy choice.

Keach was the more mature talent in 1972 and Tully’s the easier story to tell. His interactions with Oma, as played by a perfectly broken Susan Tyrell, are a highlight of the film. They’re together because it might be better than being alone. They don’t have to like each other.

Colasanto also has a good part to work with. His Lido feels very similar to the book, a trainer who wants to believe someone will come through the gym door to change his life but knows better than to believe in his want. When he goes to pull Tully out of a bar before Tully’s return to the ring, the weary sound of his voice in responding to his protege lets the audience know Lido, like his fighters, is in the game because he doesn’t really have anything else to do.

In the book, readers get a lot of insight into Munger’s angst. A future where his marriage is as ruined as Tully’s looms over the horizon. There is no real indication the Munger pair is really in love. Theirs is a marriage built on the limited options of the small town around them. Ironically, Bridges plays a part in Fat City that, on paper, acts as a compliment to the character of Duane Jackson Bridges played in The Last Picture Show.

That book, and Fat City the novel, have some thematic similarities. Both set in the 1950s, The Last Picture Show focuses on small town regrets, sex, and aimlessness across generations in much the way Gardner’s book does. The movies don’t feel as similar. With less clear focus on Munger, the audience doesn’t get to know him as well. We see his anxiety at the idea of marriage and pending fatherhood but his unraveling never feels inevitable onscreen.

A change in the ending also affects the story being told. In the book, Munger is asked to head for Utah after his pro debut. Like Tully, Munger is sent without his trainer and finds himself after an awkward hitchhiking adventure alone in the dark in the middle of nowhere.

In the movie, Munger bumps into a Tully who, after his brief return to the ring, has fully collapsed. Munger tries to get away from Tully but his car won’t start and the two men sit down for a cup of coffee at a diner. Bridges plays the scene with empathy for Tully, rarely making eye contact.

Perhaps it is a case of Houston’s direction; perhaps Gardner reimagined the characters a bit from novel to screenplay. In the changed ending, there still feels like there is hope for Munger. That hope isn’t big, but it’s at least a hope that he will take caution from Tully and not wind up where the older man has arrived.

That might be all the win any of these characters can hope for.

So is the book better than the movie? The book is richer in internal detail and provides more depth to the story of Munger but they both work for their medium. It may be a case where seeing the movie first works better for someone discovering Fat City in 2020, disallowing distraction about what’s missing and letting the page fill in the details later.

Both are highly recommended in whatever order. The book is available on Amazon. The film can be purchased through multiple streaming platforms and still often airs on various cable stations.