It starts with a simple question to a native of Pittsburgh: had they ever heard of Harry Greb?

There will always be a corner of the boxing world searching for Harry Greb. Searching for footage, facts, for anything more that can fill out what, on paper, might have been the greatest ring career of them all. For many if not most, the question of the greatest fighter, pound for pound, of all time has been set for more than half a century: Sugar Ray Robinson.

If it’s not, Greb is one of a small handful of fighters who can contest the claim.

In Smokestack Lightning, Springs Toledo goes searching for Greb both literally and figuratively. Part walking tour of Pittsburgh, part breezy walk through history, Toledo scopes his work to Greb’s remarkable 1919 campaign with plenty of sidebars into the years before and after. What he finds, and delivers for readers, is 134 pages that can be read in a single sitting with an energy encouraging the continuous turning of the page.

For full disclosure, this author and Mr. Toledo have served together as founding members of the Transnational Boxing Rankings Board since 2012 and have communicated about our mutual love of the sport for longer. Part of that communication reflects a longtime admiration for the work of a colleague who has a storyteller’s hand for capturing history. 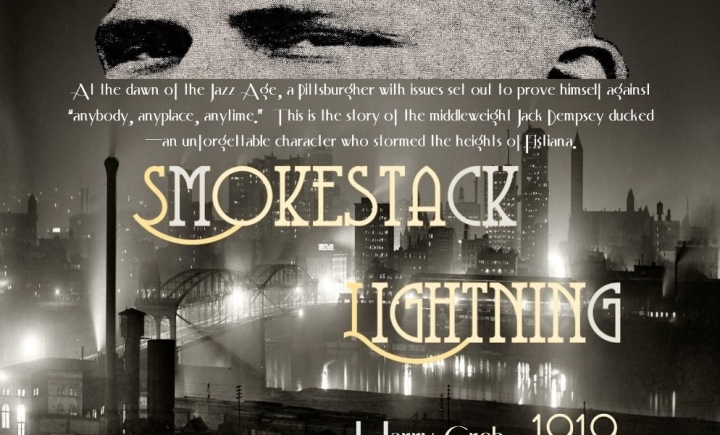 1919 was a big year for Greb. It was the year he married and a year when the middleweight and light heavyweight champions of the day seemed to have other things to do when he came calling for an earned shot at their titles. Unofficially, Greb posted a mark of 45-0 on the year (officially 9-0 according to BoxRec), arguably his finest as a professional in a career spanning just shy of 300 recorded bouts from 1913-1926.

The numbers are no typo. Why the difference between official and unofficial? There were states in the early part of the 20th century where it was not legal to allow official decisions in prize fights as the sport continued a long process in the United States of national acceptance and legalization.

It’s easy to question the era and wonder how many of the contests of the time were truly contested at full speed.

In a time when being in the ring often was how food made the table for many a battler, it’s logical to think fighting hard enough to entertain yet controlled enough to insure continued availability, while local papers often gave their opinion of verdicts to satisfy the gambling lines, might not always make for the most reliable results.

Toledo captures why Greb stands out as a contest to such logic. Accounts of Greb captured in Smokestack Lightning don’t depict a fighter moving at anything but full speed. The avoidance of Greb by men who had been in the ring with him once titles were at play suggest the special reality of being in the ring with him under any conditions.

In 1919, Greb faced and, officially and unofficially, got the best of some of the finest middleweights, light heavyweights, and heavyweights of the day. To put it into proper perspective, Saul Alvarez had arguably the best year of his career in 2019 with decisive wins over middleweight Daniel Jacobs and light heavyweight Sergey Kovalev. Alvarez is roughly the same height and weight as Greb. Imagine adding, say, super middleweight Callum Smith and cruiserweight Mairis Briedis in the previous calendar year to Alvarez’s resume.

Greb did that in 1919, and he did it in multiple, posting unofficial/newspaper wins over the likes of Mike Gibbons, Battling Levinsky, Bill Brennan, Billy Miske, Jeff Smith, and Mike McTigue. He faced several of them more than once. As Toledo points out, the middleweight from Pittsburgh was so successful against the best light heavyweights of his ring years, “the greatest light heavyweight who ever lived may have been a middleweight.”

When moving outside the scope of 1919, Toledo takes great care to recount the tale of Greb’s quixotic quest to secure a fight with Jack Dempsey. Greb, notably, beat many of the same heavyweights as Dempsey but beat them worse. This included an unofficial win in 1919, after a previous similar outcome in 1917, over a Willie Meehan who went 2-1-2 in five fights with Dempsey along Dempsey’s path to the title.

Toledo colorfully pulls together accounts of sparring sessions between Dempsey and Greb where Greb more than held his own and often got the better of it based on multiple first hand accounts. As described, their sparring sessions were of such energy that they left those who saw them hollering as if they were live at an all-out fight because, while they lasted, it reads likely they were.

Smokestack Lightning also takes great care to describe the love story of Greb and his wife, Mildred, while also recounting Toledo’s personal tour of modern Pittsburgh, recounting what constructs remain from the age of Greb and what stands in replacement of those monuments now, including photographs of the modern replacements along the way.

The book is ultimately not a comprehensive review of Greb’s career and life but a significant snapshot that attempts to capture a piece of what makes the Greb legend and reality so enduring, significant, and special among fight followers. In the never-ending search for Harry Greb, Toledo finds a lot to set anyone seeking more down the road to discovery.

Smokestack Lightning is available at Amazon via print or Kindle for $13.99

I admit that the information I got of Harry Greb's is limit. Thank you for Cliff Rold to give me and others, the tools to still follow Harry Greb's history and boxing career. :grouphug::cool3:

[QUOTE=Rusty Tromboni;20470266]When we moved to thr Pittsburgh area, my grandfathecame whenever he came to visit would always talk about the Phillies-Pirates rivalry that had concluded the decade past... and about Boxing... how he was a sparring partner for Tommy Loughran…

[QUOTE=Rusty Tromboni;20470266]When we moved to thr Pittsburgh area, my grandfathecame whenever he came to visit would always talk about the Phillies-Pirates rivalry that had concluded the decade past... and about Boxing... how he was a sparring partner for Tommy Loughran…

When we moved to thr Pittsburgh area, my grandfathecame whenever he came to visit would always talk about the Phillies-Pirates rivalry that had concluded the decade past... and about Boxing... how he was a sparring partner for Tommy Loughran at…

[QUOTE=billeau2;20469819]Good luck Cliff... I heard it said that in Pittsburgh there was a trunk perched over a ledge and in it were documents detailing how the Earth had been visited by aliens, with photos and all... unfortunately it was knocked…