It’s as true in boxing as in many other walks of life. Lives lived vibrantly, colorfully, often outlive their active moments in time. Former heavyweight champion Max Baer last stepped into the ring in April 1941, stopped for the second time by Lou Nova. Baer left the earth 18 years later.

Yet, even in 2020, it doesn’t take long for new followers of boxing to happen upon his name and start to find some of what makes him enduring. Published in 2018, author Colleen Aycock (with David Wallace) attempted to capture so much of why in her enjoyable biography, The Magnificent Max Baer: The Life of the Heavyweight Champion and Film Star.

Aycock lets it be known early on the personal connection she feels to Baer, stating in the preface:

...my feelings about the man are deeply rooted in my own family history. I know what life is like for the professional always on the road, mastering his trade, competing for titles, satisfying sponsors and other public demands. Although Max loved his family, he spent more time on the road than at home. He literally died on the road. My brother was a PGA touring golf pro who also died close to the age Max died. The long haul for any touring professional is gritty, and takes its toll on the body and family. My father also faced that toll. He was one of Max Baer’s many sparring partners. He eventually died from pugilistica dementia. Yet the stories my father told me and the opinions he held of Max were very different from those reflected in a movie that my father never lived to see. 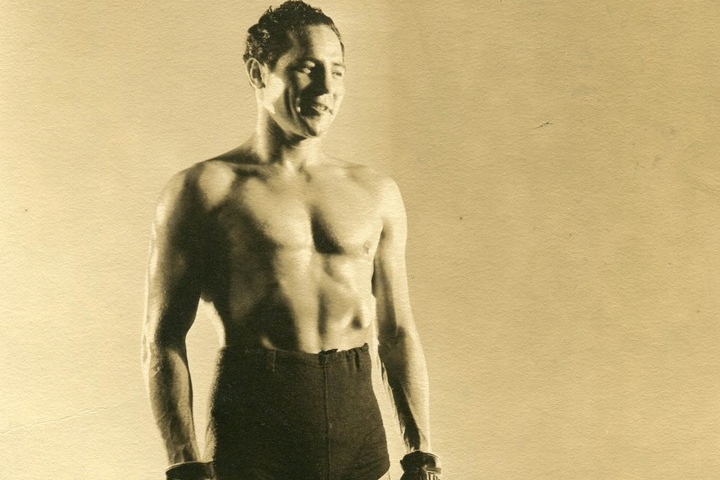 Some readers will recall controversy around Cinderalla Man, the Ron Howard biopic of Jim Braddock, regarding its depiction of Baer. Aycock makes multiple references to the film in her book and one can see her biography as a corrective.

She doesn’t do so by painting Baer as a saint.

A saint would never have been so fun.

Instead, following an introduction to the life and family history of Baer, moving from Nebraska to Colorado and then finally to Northern California. Readers learn how Baer came to the sport, heading to Oakland to begin chasing his dreams in his late teens. It’s in the early stages that the flamboyant personality of Baer is seen already emerging with a taste for fast cars and nice clothes stressing early management.

The book takes care throughout to show how the managing of Baer framed much of his professional life with Baer building a trail of future lawsuits on the road to a lasting relationship with manager and promoter Ancil Hoffman. It also pays careful attention to the relationship Baer developed with former heavyweight champion Jack Dempsey. Dempsey would serve as a friend, mentor, and backer of Baer over the years and Baer’s punching power allowed for easy, early hopes he could be the next Dempsey.

Big for the era at nearly 6’3 and regularly over 200 lbs. as he matured, those aspirations were never quite achieved. Some of that is traced to the death of Frankie Campbell after Campbell was knocked out by Baer in 1930 and a change in Baer’s aggression. It would be compounded later when former foe Ernie Schaf succumbed to injuries in a bout with Primo Carnera just months after a physically exacting loss to Baer.

Writing about the Campbell loss in particular, and the ensuing legal fallout, Aycock relates:

The headline death in the ring brought national attention to both victim and victor. The twenty-one year old (Baer) was horrified at what had happened, and he would never recover. Had it not been for this ring tragedy, Dan Parker said in the New York Mirror, his “killer instinct would have made Baer [the] greatest.”

As the book moves along, readers will find he was still great enough. He fell short of hopes in his New York debut, losing to Schaf in their first encounter and to the great Tommy Loughran but made his way back. Following a decision loss to Paulino Uzcudun in Reno in 1931, Baer would reel off 14 wins in a row including a knockout of former champion Max Schmeling and a toppling of Carnera for the crown.

It was in this phase of his career that Baer became more than just a boxer. Baer became a celebrity, complete with a tumultuous marriage to movie star Dorothy Dunbar and a starring role in The Prizefighter and the Lady. Baer would portray “Steve Morgan,” complete with a ring robe he would go on to use for real fights later on. Shades of the Oceans Eleven remake scene where Lennox Lewis and Wladimir Klitschko were brought together as fiction, Baer faced off with Carnera on screen before they met in reality.

Unlike Lewis and the younger Klitschko, life imitated art.

The win over Carnera was Baer’s apex. What followed, due to promotional struggles and turf battles not much different than what fans grow frustrated with today, Baer was left to the exhibition circuit for the year after Carnera. Aycock makes a strong case for an injured Baer arriving at his infamous upset loss to Jim Braddock with plenty of other colorful opines on what may have gone wrong that night.

The loss to Braddock was followed by a more devastating loss to Joe Louis that saw Baer slapped with a quitter label, in part due to harsh words from referee and Baer antagonist Art Donovan. Baer would work hard to shed the label, building another lengthy winning streak, hitting more turbulence in the ring, heading abroad to extend his fame, and never quite arriving at the second chance at the title he badly wanted.

Following his career, the book gives a good account of how Baer extended his public life in military service in World War II, on stage, on screen, and as a popular pitchman. It is ultimately as thorough an account of the life of Baer as one can find told from the voice of an admirer. For fans interested in a period in boxing when traveling from town to town just to be seen for a few rounds was still a vibrant part of the game, New York was the center of the fistic universe, and film noir vibes could feel like real life, Aycock’s biography of Baer will be a satisfying read and comes well recommended.

The Magnificent Max Baer can be found in print or for Kindle on Amazon.

[QUOTE=landotter;20493840]Curious me has to ask: What are some of your favorites?[/QUOTE] There are many but to name only one: Raging bull would be the one. And as I said, I love Rocky, just the first one, the others suck.

[QUOTE=eco1;20492229]AS much as I love Rocky, from a cinematographic point of view, it is really very distant from the best boxing movies. Then , it is still a great movie on it's own.[/QUOTE] Curious me has to ask: What are…

Max Baer power always make chill my spine. If this accident that rob him to become more famous and greatest was not happened, then he one who was going to be in the best top 5. :boxing:

[QUOTE=landotter;20490527]First off... I love "Cinderella Man". Just think it hits on almost every dramatic note: -Maybe the greatest movie about the great depression made in the last 30 years. Not even sure what would be 2nd. -One of the greatest…

[QUOTE=crold1;20490534]For whatever reason, haven’t got to it yet. Have it on DVR[/QUOTE] It is a really fantastic movie. Honest. Hit "play", you will not be disappointed.