Boxing Without Boxing: Against The Ropes

“Shut up. You’re ruining the movie by talking about what really happened.”

The comment flew across the room seconds after a burst of laughter near the movie’s conclusion. The big speech before a fighter in bad shape scores a knockout win is a well established cliche in boxing movies. In this one, the fighter’s now former manager enters the ring from the opponents corner, walks across the canvas, and delivers the critical moment of motivation.

That’s a disqualification, right? At least a point deduction? A trespassing charge?

Throughout big parts of his career, from middleweight to heavyweight, James Toney was one of boxing’s most entertaining talkers and battlers. Sometimes great, sometimes not, the mercurial “Lights Out” was never dull. His relationship with manager Jackie Kallen made for plenty of ink early in his career and the combination of their stories would have made for a hell of a movie. 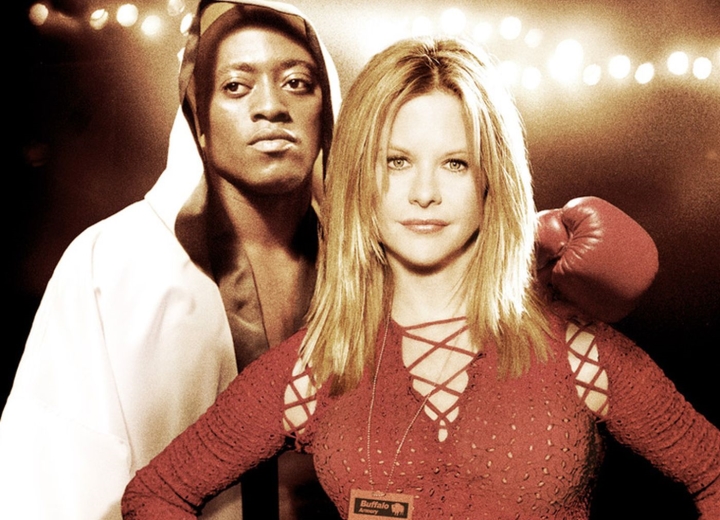 A flop upon its release, critical reviews when it came out years ago made skipping it an easy call. This first time viewing came about via reader request. L. Lewis wrote in with a recommendation, stating “It's a little cheesy but it's a good look at a small time promoter trying to make it.”

Let’s start with the positives. The casting of the film largely works. Omar Epps plays not-Toney, Luther Shaw, with energy, charisma, and cool. It’s not as compelling as Epps early career work in Juice or Higher Learning but he does his best with the material. Director Charles Dutton cast himself as trainer not-Bill-Miller Felix Reynolds and provides a strong performance. He’s believable as someone who can harness the potential of Shaw.

Dutton has always had a unique ability to convey a balance of calm, emotion, and authority. His national arrival in the great sitcom Roc came after a tumultuous youth that included a stint in prison, a Master’s Degree from the Yale School of Drama, and success on Broadway. Dutton knows what an underdog story is and does his best to capture one here.

Shaw, a drug dealer with some amatuer background, is only one underdog. He’s not the centerpiece of the story.

Against the Ropes gets one thing surely right: Jackie Kallen emerged as a unique female manager of note and made plenty of headlines because of it. Meg Ryan, cast as Kallen during a period in her career when she was evolving away from her years as queen of the romantic comedy, gives an interesting performance. She shows more grit than one would have seen in a Sleepless in Seattle but ultimately can’t escape being Meg Ryan playing a boxing manager. That’s not really a bad thing. Ryan is, as ever, charming, warm, and easy to root for.

Kallen is the only major player boxing fans will recognize by name. It doesn’t take much guess work to figure out who stands in for, say, a Bob Arum but the movie is overwhelmingly fictionalized. In some ways, that may have been intended to be freeing. Rather than worry about what scenes or moments of time are or are not being depicted accurately, Against the Ropes just borrows hints of reality and goes full tinseltown.

For boxing fans discovering the movie now, it probably won’t work in refocusing their attention. The actual boxing in the movie is a real weakness. Epps does his best but boxing clearly isn’t his thing. Anyone who lived through the era will see how manipulated the story is. When Ryan enters the ring to deliver the big speech at the end and it’s too far at odds with what really happened. Kallen was all the way there, down to the post-fight interview, as part of the team the night Toney upset Michael Nunn for his first world title.

Without giving everything away for fresh viewers, she’s dramatically returning to the fold when Shaw is getting his crack at definitely-not-Nunn. Against the Ropes is meant to be the tale of how Kallen succeeded against expectation and sexism. The way the movie lays out is well in line with beat the patriarchy gems like Baby Boom but it’s solution to set up the finale undercuts the narrative. Ultimately, the real story is more interesting, triumphant, and celebratory of the anti-sexism values at the heart of it all (and what happened later to end the relationship between Toney and Kallen wouldn’t have mattered to the movie one way or the other).

Here’s the thing though: one doesn’t have to be a boxing fan to give this a look. It can work as an evening’s entertainment for a family. As the requesting reader noted, it’s a little cheesy but cheesy isn’t always bad. Ryan’s heroine had non-boxing fans in the room rooting and they didn’t care one iota what really happened. They wanted to see Kallen succeed, Shaw win, and the antagonist manager/promoter played with extra mustard by the ever enjoyable Tony Shaloub get what was coming to him.

Hollywood produces far more that we forget than is remembered. Against the Ropes is part of the formula that turns out pieces of the dream factory where odds are overcome and happy endings follow. Boxing and the formula work well together. The way we digest movies relies heavily on perspective. The perspective of the non-boxing fan was as interesting to watch as the movie. They had a good time with Against the Ropes and returned to other activities with a simple ‘that was pretty good.’

Putting aside a little violence and salty language where little ones are a concern, if anyone is looking for a way to hang out with their people, kill a couple hours, and get what they’re rooting for, Against the Ropes is worth a shot and available currently on Showtime On Demand.

What the f[I]uc[/I]k! Where is all the hard core boxing's fans? :hitit: