“Are you not entertained?”

Almost a decade before Russell Crowe faced down the Praetorian Guard, some tigers, and a future nemesis to Bruce Wayne for Oscar glory, a cross section of talented character actors and emerging young talents got together for their own two hour contribution to the name Gladiator.

Gladiator, circa 1992, would be hard to call a good movie. Watching it for the first time in more than twenty years, it’s flaws were easy to remember. Still, Crowe’s most repeated quote from his more famous 2000 epic applies in abundance to this trip through the red light district of sport.

Damn if it’s not entertaining.

Gladiator has received several requests for review for this series by the readers at BoxingScene. Forum user ShoulderRoll finally pushed it over the top when emailing:

Would you consider doing a review in your column of the criminally underrated boxing film Gladiator co-starring Cuba Gooding Jr? I dare say it would be a pleasant discovery for any boxing head who has yet to see it.

After watching the movie again, it’s fair to argue it would be a pleasant discovery for anyone, boxing head or not, who hasn’t seen it. It’s particularly true if they spent any sigpart of their youth in the early 1990s. Gladiator entertains as a time capsule when watching in 2020. The signposts defining decades develop over time. The early years are often the hangover from what came before. Gladiator is a movie that feels like it has a foot remaining in the 1980s, complete with power ballads akin to a classic Stallone flick.It even borrows a memorable growl from Stallone’s “I saw this on cable twenty times when I was a kid” pantheon.

Robert Loggia, the seedy grandfather in the arm wrestling opus Over the Top, plays the seedy underling who bedevils the hero of the tale into a world of underground boxing. Loggia seems to be having a blast as does the villain he answers to, played by the recently departed Brian Dennehy. Dennehy was one of those great actors who could go out and win a Tony one day, add nuance in replacing the great Kirk Douglas in Snowy River, and then steal scenes in Tommy Boy. Dennehy was a pro who knew the difference between a script asking for his thespian’s best and the joy of being able to turn it up and loose with a script that didn’t. 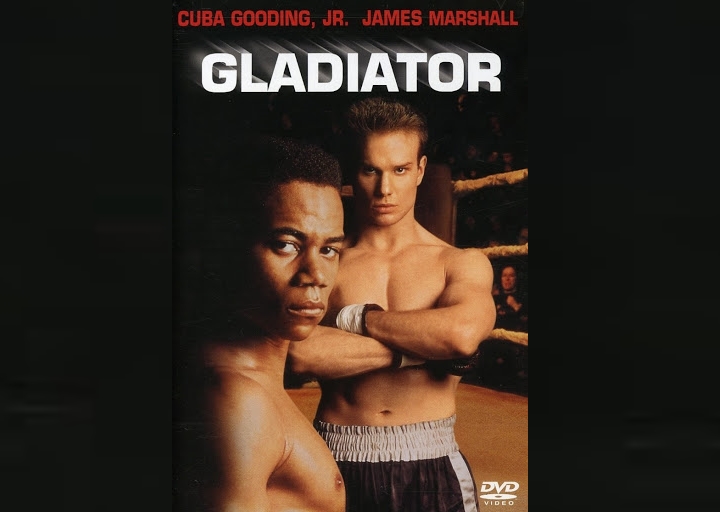 The story is simple. A kid whose father has run up gambling debts tries to make a quick score to pay them off only to have the sins of the father revisited on him when Dennehy buys up more debt than he knew about. James Marshall plays the primary protagonist and reminds why he was almost a star. Memorable for his turn on Twin Peaks, and later in a Few Good Men, Marshall is joined by Cuba Gooding Jr. and Jon Seda, later excellent in Selena, Homicide, and Treme, as the other young fistic hopefuls to root for.

The catch: these aren’t aspiring Golden Glovers. They’re kids fighting in no rules, unregulated matches for money. Marshall early on is forced to learn that his amateur background in Connecticut won’t work between the ropes in gritty Chicago. Kicks, headbutts, nut shots, elbows, and doctored gloves...anything goes. A brief discussion of the bareknuckle greats of the 19th century foreshadows to the audience that, yes, we’re going there too.

Pick a cliche, any cliche, from boxing movies or just good old fashioned 80s revenge movies and it’s there. The hero will have to work through multiple villains without losing his soul, avenging a lost friend along the way and stealing the heart of a girl from the better side of the tracks. He’ll do all this while learning the lessons imparted by a sage Ossie Davis. There is also a layer of racial undercurrent explored at about the level of an after school special, but with more swearing.

The writing isn’t great but there are charms to that. Like more movies than not centered on troubled teens over the years, the dialogue sounds like it was crafted by people who wanted to still be young but forgot what young sounds like. Watch Gooding’s breakout performance in Boyz in the Hood one year earlier; the difference is clear. The melodies of “Rico Suave” and “Can’t Touch This” would have come after those songs had already lost their spot in the rotation but probably sounded like what the kids were listening to by the filmmakers.

Gladiator wasn’t a hit when it came out in theatres. It probably wasn’t meant to be. It’s the sort of movie in it’s time you’d see a commercial for, never get out to see, and then recall when it appeared at the local video store on VHS or watch on cable when it made its rounds. It’s a movie perfectly with microwave popcorn and off brand soda.

The movie was directed by Rowdy Herrington. Midnight movie enthusiasts will remember him most for one of the best bad movies of all time, Road House. Like Gladiator, that Patrick Swayze classic is awash in manly violence, revenge, and tops Gladiator’s brief, sweet love scene with a rocky excursion for the ages. Herrington knew how to make a popcorn flick.

How is the boxing in Gladiator?

It’s preposterous but in a good way. Herrington films it with real energy. The fighters occasionally duck, the sound effects crunch resoundingly, and Gooding throws better combinations than most actors (though his uppercut is launched with interesting flourish). Good movie boxing can at least, for a moment, make one want to see the hero win and put aside realism. The final fight between Marshall and Dennehy does the trick.

Here’s some food for thought: Gladiator 1992 sees a noble man drawn into an ignoble combat he ultimately exploits to gain revenge over the man who manipulates it all from above (at least in the office scenes).

What was the plot of Gladiator 2000 again?

Gladiator is recommended quarantine viewing and is available for purchase on all streaming platforms affiliated with Movies Anywhere.

I didn't realize this was directed by the same guy that directed Road House. Another film which I enjoy. There's something to be said about a good, entertaining action movie. Even if the writing and acting isn't the greatest. Not…

What a coincidence, I saw this movie yesterday. Is not for all boxing fans, but is a gem worth a look. :boxing:

It’s actually one of my favorite movies ever. Chicago has a huge boxing tradition and this was going down in a few cities. I know Sacramento had a big underground boxing ring. In most port towns of Latin America you…

[QUOTE=BigJoe999;20547846]While boxing is my favourite sport, Im not really crazy about boxing movies....to me, it is a hard sport to duplicate by non-boxers. Diggstown was pretty good, but it was a comedy. On another note, Cuba Gooding's career really went…

Yeah, I remember seeing that GIF posted right after Dennehy's passing. I feel like Gladiator is a script that could be re-made into something much better, possibly. The core of its story is pretty compelling. It just feels like the…