Following his controversial draw in 1993 versus Julio Cesar Chavez, there was little argument about the best overall fighter in boxing. The spot after Pernell Whitaker was fertile ground for debate as the year came near its end.

For one of the leaders in the next best category, there wasn’t much to argue about in his weight division. Since a knockout loss in his first title shot at the nuclear hands of Julian Jackson, Jr. middleweight “Terrible” Terry Norris had done nothing but win. Starting with three straight after the loss to the “Hawk,” Norris earned a second title opportunity and made the most of it with a first round shelling of John Mugabi.

Over his next eleven fights, he would defend ten times, retiring (for a while at least) Hall of Famers Ray Leonard and Donald Curry, stopping reigning welterweight titlists Maurice Blocker and Meldrick Taylor, and besting a pair of future titlists in Jorge Castro and Carl Daniels. In September 1992, one of the men intended for his ledger, former welterweight champion Simon Brown, pulled out the day of the fight with a medical issue.

Brown had been a fearsome force one division below Norris for several years. Brown won one of the last great wars scheduled for fifteen rounds to win the IBF crown versus Tyrone Trice and defended the belt eight times. In the last of those, he laid claim to the lineal crown in a unification war with WBC titlist Maurice Blocker. Brown shed the IBF belt and was stunned by a masterful performance in his next contest, losing the welterweight laurels to future Hall of Famer Buddy McGirt. The bouts between McGirt and Norris didn’t say much about what Brown had left to offer. A series of stay busy contests kept him at the ready for a title shot without much in the way of risk. 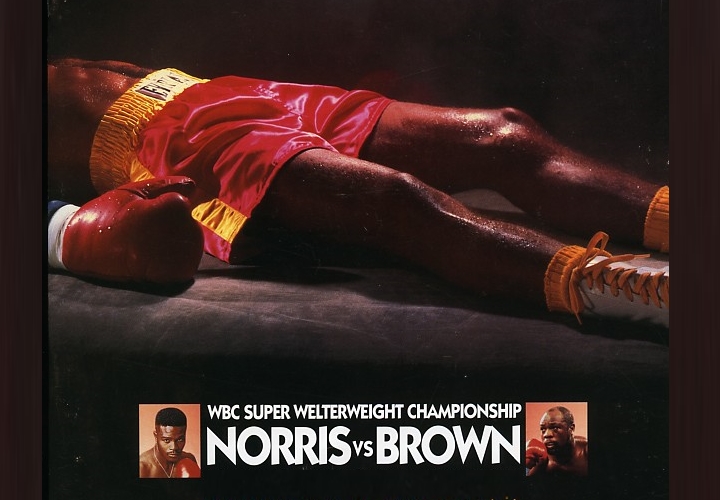 Even after barely surviving an unexpected shootout with Troy Waters earlier in 1993, the younger, faster, and highly skilled Norris was widely expected to be able to handle Brown and move on to bigger things. After Norris’s most recent victory over Joe Gatti on the undercard of Whitaker-Julio Cesar Chavez, Don King was talking about a tournament for his deep bench of middleweights. There was even a little wonder floating about whether a future fight between Norris and recently minted middleweight titlist Roy Jones could be a generational treat.

First and finally, on the undercard of Chavez-Andy Holligan, there would be Simon Brown.

That’s why they fight the fights.

Norris begins aggressively with a jab and quick right to the face of Brown. Brown circles, jabbing, and ties up when Norris backs him to the ropes. Norris lands a series of lefts to the head and body as he tracks Brown to the ropes again. Brown escapes only to be backed to the ropes again. Brown covers up, clinches the left arm of Norris, and after a break starts to fire back more frequently. Both men land thudding blows to the body and then clinch again. With seconds left in the round, Norris steps hard into a snapping left jab and goes down. Norris scrambles up from his back to beat the count and comes forward firing as the bell sounds.

Norris is on the front foot again to start the second, firing hard and in combination. Brown is more economical, clinching, blocking, and waiting for hurting openings to the head and body. Brown eats several hard shots upstairs but stops Norris for a moment with a hard right to the chin. They trade at mid-ring and along the ropes. Stepping out of a clinch with his hands down, Norris eats a huge right to the temple and his legs wobble. Suddenly it’s Brown with Norris against the ropes, Brown landing a big uppercut, only for Norris to come firing back. Brown lands an uppercut at the bell.

Still with little in the way of caution, Norris is hunting for a knockout and Brown is able to take the what lands. A Brown right dazes Norris and Norris nearly falls through the ropes, taking another hard shot while he’s hunched over. The referee separates them and Norris resumes his attack. Letting his hands go with abandon and flair, Norris can’t find anything to budge the determined challenger. Brown taunts Norris for a moment and just before the bell lands yet another crushing right, then a left hook and another right. Norris doesn’t fall but his legs are a mess as he nearly floats to the corner with sixty seconds to pull himself together.

When the champion surges toward him, Brown patiently lies in wait, landing three left hands to send Norris tottering away in retreat. Norris goes to the ropes, blasting away and then turns Brown to the strands and keeps firing. Brown takes two right hands, takes a little step, and then comes over the top with a devastating right hand behind the ear to send Norris in a heap to the floor. Norris’s eyes are glassy as he moves from his back and then attempts to rise. Garcia reaches the count of nine, with Norris still rising but in no shape to go on, and waves the fight closed at 1:06 of the fourth round.

While Chavez led the bill that night, there was no denying what left the biggest impression in the days after Brown’s stunning win. Ring Magazine would name it the Upset of the Year in their April 1994 annual awards issue. In naming Brown their Fighter of the Month as well, Ring added, “Both fighters landed with maximum power. Only one of them, however, possessed a chin sturdy enough to give and take.”

For those four rounds, the give from both men remains as fantastic to watch today as it was the night of the fight. Brown and Norris were two of the more entertaining fighters of their era and, at least the first time, they combined for high drama.

Writing for the Washington Post, William Gildea was able to capture the spirit of the action as well as Brown’s reflections upon his return to Maryland:

Brown anticipated Norris's characteristic charge from the opening bell and planned to counterpunch and circle. In fact, Norris landed typically heavy shots in the early going. But unlike other Norris opponents, Brown didn't buckle. Instead, he retaliated with Norris-like fury. The result was what James Cooks, Brown's adviser, called "a street fight."

"Simon," said Cooks, "was like the everlasting Timex. He took a licking and kept on ticking."

"People have said the four rounds reminded them of the three-round Marvin Hagler-Tommy Hearns fight," said Brown, referring to the 1985 slugfest won by Hagler. This battle began to turn, improbably, with an unusually crisp jab that sent Norris crashing to the canvas.

"I haven't seen many fighters drop somebody with a jab," Brown said of his own work. "Leonard did it against {Wilfred} Benitez, but other than that I don't remember it happening. I thought, maybe his jaw isn't so great.”

For Norris, chin and temperament were always a story. In motion, and at the top of his game, Norris often looked the part of one of the greats but his penchant for hitting men already on the floor, and his vulnerable whiskers, kept him just shy of the highest peaks. Of his three losses before Brown, one had come by knockout and one by disqualification. He was lucky to get by Leonard without being disqualified, dominating the action but getting away with two blatant fouls that night. After the first contest with Brown, there would be two more knockout losses and two more disqualifications.

There would also be plenty of glory.

Brown-Norris II five months later was a much different affair. Norris boxed, moved, and stayed within a disciplined game plan for one of his best professional outings. There would be no second war; Norris won a wide decision. The Brown rematch was followed by consecutive DQ’s against Luis Santana before another streak that had Norris back at least on the fringes of pound-for-pound discussions. Nine straight wins included a unification victory over IBF titlist Paul Vaden and a claim to the division’s lineal throne. A loss to Keith Mullings in 1997 cost Norris a showdown with Oscar De La Hoya but his roller coaster seven years at or near the top of 154 lbs. was enough to earn him a spot in the International Boxing Hall of Fame in 2005 at a mark of 47-9.

Brown has unfortunately been too lost to history. The Norris win came when Norris was as highly regarded as he would ever be, square in his prime. Prior to the McGirt loss, Brown’s only defeat came to a more experienced Marlon Starling on a split nod. Combined with his partial unification at welterweight and a lengthy run in that class, Brown accomplished more than several others who have been enshrined in the Hall of Fame. After the Norris loss, two of three defeats across his first forty-four fights came to Hall of Famers.

Brown has yet to appear on the ballot.

Perhaps Brown is overshadowed by his place between the Leonard and De La Hoya years. Perhaps his lingering on too long after the Norris bouts clouds what came before. He lost his last six fights and nine of his last thirteen, including a highlight reel knockout to Vincent Pettway and sad attempts at middleweight belts against Lonnie Bradley and Bernard Hopkins.

From 1988 to his loss to Pettway, he was a significant part of the title scene in two talented weight classes and rose to the top of both. He did it while giving the fans what they came to see more often than not. His final career mark 47-12 is certainly misleading. It might not make Brown a Hall of Famer, but it’s past time his name was on the ballot so the voters can decide.

Tons of $$$ from ppl Holmes vs Cooney Norris vs Brown Hopkins vs Trinidad. Such easy pickings. . Just amazing how many ppl thought Brown was going to be whitewashed by the chinny Norris. Terry should have had the nick…

Norris at the end of the 3rd did the stank leg big time......body bopping all directions

Back then I thought Norris fell in love with scoring the knockout and left his great skills behind. Showed in that fight but corrected the problem in the rematch.

Is sad that Simon Brown still is not inside the Hall Of Fame Ballot, his fights always was entertaining and his opposition was good. Love the adjustment Terry Norris did in the rematch and a good boxing schooling. :boxing:

still a big terry norris fan. guy was fast and could crack. a bit chinny so all his fights were very entertaining. thats the big drama show,.