Part of the allure is the sound of it all.

Leather against flesh and the sound of feet scraping and sliding across the canvas; the voices of anxious cornermen; the snapping of heavy bags and buzzing of skip ropes as they kiss the floor beneath the feet of gladiators whipping themselves into shape…

Boxing is not a quiet sport. It certainly isn’t silent.

One of its earliest notable appearances as film fiction was.

In 1927, making his directorial debut under the British International Pictures banner after prior work with other studios, master of suspense Alfred Hitchcock threw his hat, literally, in The Ring. It’s an interesting look through one of film’s great eyes still developing his craft and an early model for the way boxing is often used onscreen to tell the story of someone literally fighting their way from rags to riches.

Hitchcock is also credited with writing the film.

The real story isn’t the fisticuffs. The Ring centers around a love triangle where a couple begun in humble origins is tested by the allure of grander wealth and temptations. As was the case in reviewing Gentleman Jim for this series, the introduction of the story gives a glimpse at an element of boxing culture from the early part of the century more often read about.

The Ring begins at a carnival with images of people on rides, Hitchcock already showing his ability to capture the energy of crowded spaces. A carnival barker is attempting to lure spectators inside a tent to witness, or even participate, in smokers with ‘One-Round’ Jack Sander. A well-dressed face in the crowd takes in the call to action and locks eyes with the woman in the ticket booth. 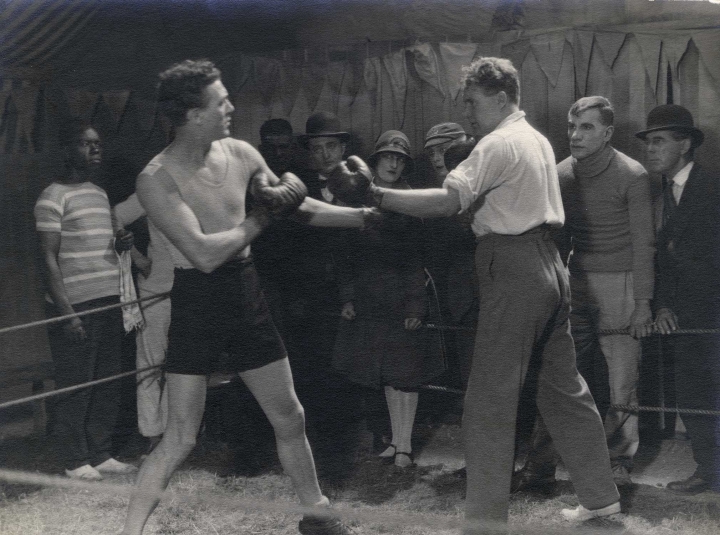 Carnival smokers are a fun part of boxing lore. This scribe’s great-grandfather, according to family legend, made a habit of them. Sometimes he walked away with a pot, sometimes he didn’t, and at least one family tale has the end of them coming on a night gone wrong enough for great grandma to put a stop to participation once and for all.

The woman at the ticket booth is the intended of Sander. Unknown to all, the well-dressed face in the crowd is Australian heavyweight champion Bob Corby. After witnessing Sander handle a couple of the locals, Corby agrees to take his turn. When Corby takes ‘One-Round’ to the second, the tickets start to fly and eventually it is Corby with his hand raised. After the dust settles, the smoke still in the air, Corby makes an offer to Sander to join him as a sparring partner.

Corby is less interested in Sander than he is the character title billed as “Mabel - The Girl.” Corby provides her a bracelet and his winnings from the Sander smoker before the two kiss out. At first, Sander is oblivious while his friends and associates see clearly there is something amiss. Sander wins a trial fight to begin a formal career and uses it as a chance to wed Mabel, her eyes still distracted and Corby undeterred.

As the story moves along, the sexual tension between Mabel and Corby mounts and Sander increasingly feels the sting of his cuckolding. Corby has the money, position, and acclaim he doesn’t. Sander’s answer could logically be, “who needs her?” but that wouldn’t tell the story Hitchcock is aiming for.

Instead, Sander sets his sights on unseating Corby and goes to work fighting his way up the ranks. Sander is at his lowest when he catches Mabel playing the piano staring at a framed photo of Corby and in the evening after he wins a final eliminator fight and comes back to celebrate only to find his wife is about town with Corby and his entourage. Like any good boxing movie to follow, the audience is headed towards a final showdown with pride and the love of a woman on the line.

Along the way, Hitchcock’s ability to mix humor into tense situations is already on display. The wedding scene is quite comical with the best man caught picking his nose and accidentally providing a button instead of a wedding ring at first attempt.

The boxing action in The Ring is often awkward, in part because of the frame speed and in part because the medium was still developing ways to pace and capture the drama of boxing on screen. For the time, it accomplishes the goal as well as could be expected.

Also attractive is a hotel scene featuring a pair of dancers in full flapper regalia amidst a party. It feels like a slice of Fitzgerald in real time. The energy and frivolity of the “Roaring 20s” comes off the screen with real flair.

Many in contemporary audiences will struggle with some of the depictions on screen of both Mabel and race. Let’s begin with Mabel. She’s not a sympathetic character and as the story moves along it’s hard to see what Sander sees in her. In that sense, she’s less a person and more a possession being battled over. When Mabel meets early on with a fortune teller from the carnival, she is promised a fate with a rich and tall man.

Sander will eventually be that man but Mabel’s aims are rarely treated as more than material and superficial. The conclusion of The Ring attempts to redeem her. Whether eyes in 2020 will follow suit is arguable.

There are also flashes of racial slurs in the dialogue cards and a disturbing humiliation of a man of color for no purposeful reason in the early moments of screen time. It might have played for humor to some in 1927. It’s not funny. This story isn’t Birth of a Nation but those brief early images wouldn’t have been out of place there.

Hitchcock would go on to greater acclaim of course and this isn’t the best of the “Hitchcock 9,” the collection of his surviving silent films. He would evolve and grow as an artist and deliver some of the greatest viewing experiences ever put to celluloid. For fans of his work who haven’t gone this far into the Hitchcock library, it’s a worthy use of time.

Fans of boxing movies will also find much of interest. The Ring is an important piece in establishing some of the template for what would follow as boxing began its unique and enduring relationship with the silver screen. Fight fans stuck in a cycle of social distancing can burn a little less than two hours quickly with this one.

That story was a first one to me. Thank Cliff for this valuable information. I am going to eye this one. :boxing:

[QUOTE=TheMyspaceDayz;20488646]Didnt see you here. Address people in a quote when you want them to see what you’ve written. Have zero interest in discussing politics. Anything I say on the matter is either to make fun of, mock, or discredit people…

[QUOTE=Dangereaux;20488636]TheMyspaceDayz - You're probably joking and I'm not subtle enough to pick up on your sarcasm. Apologies if that's the case. But are you talking about the c*ck censorship? You know that's as Christian Conservative a move as you can…

They really do, they're all over it. There's no way they'd block the c*ck. They want it all out there all the time.