Boxing Without Boxing: Hands of Stone

Given the number of times boxing has made its way to the silver screen, it’s inevitable the portrayals will be a mixed bag. Biographical depictions are particularly tricky. Non-fiction means facts conveyed often to an audience that may have lived through the moments they are watching be retold. The idea of dramatic license is understood going in. How it is applied makes all the difference.

Scorsese’s Raging Bull, hailed as one of the finest films of the 1980s, applied it as perfectly as any film could, viua careful character study where boxing acted as backdrop. Mann’s Ali was less successful. It featured a solid lead performance but the shadow of Ali still loomed too large and the film never seemed to figure out what it was trying to say.

Released in 2016, director Jonathan Jakubowicz attempted to tell the story of the great Roberto Duran in Hands of Stone. The film opened to mixed reviews and was a flop at the box office. With little live boxing to anticipate for the moment, this was as good a time as any to give Hands of Stone a look.

Let’s start with the positives.

The story of Duran’s rise from childhood to the title is well told and attempts to place the film in a larger context. The political disputes between the United States and Panama provide a worldliness as Jakubowicz explores the poverty and desperation of Duran’s youth. The child actor cast to play a young Duran has real energy and enough chip on his shoulder to imagine him growing to be the fearsome force that would dominate the lightweight division of the 1970s.

Robert DeNiro as legendary trainer Ray Arcel is also a boost to the proceedings. DeNiro is often cast these days in films that seem less than his stature and talent, roles where it feels like he’s playing a sort of DeNiro of collective memory rather than new characters. Here, he has a role where he has a chance to show range, vulnerability, and regret.

Arcel was famously run out of the sport by the mob before finding his way back to the game in the 1970s. The film dramatizes his return by setting him against John Turturro’s Frankie Carbo, one of the most infamous controllers and fixers of boxing lore.

Just as well cast is the always underrated Ruben Blades as manager Carlos Eleta. Blades typically comes with a grizzled seriousness; the actor just conveys quiet authority and intelligence. In his portrayal of Eleta, there is also a pragmatism and patience in dealing with a mercurial talent.

Cast in the lead, Edgar Ramirez is at his best in the second half of the film. While he struggles to capture the menace of Duran at times, he is excellent in portraying Duran’s psychological warfare against Sugar Ray Leonard, the subsequent downfall following the victory in their first fight, and in a meeting with Duran’s absent father. 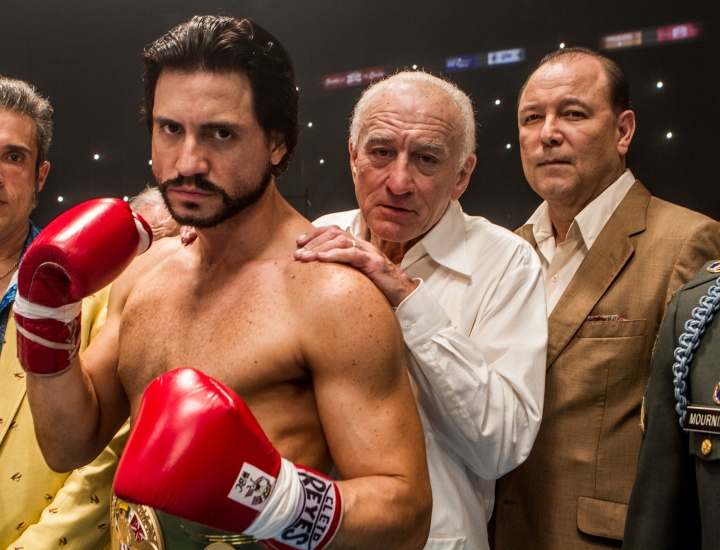 It’s as a younger Duran where Ramirez is an awkward choice. He’s fine for the bearded, prime Duran but he’s too old to convincingly portray the late-teen and early adult. When Duran is shown pursuing the young woman who would and remains his wife to this day, Jakubowicz does a good job staging actress Ana de Armas, herself giving a strong performance, as a believable high school age girl. Ramirez is so far removed physically from the age Duran is supposed to be (Duran was 17 when he married a 14-year old Felicidad Iglesias) the visuals just play creepy.

So does the momentum of the story at the midway point with the introduction of Ray Leonard. While Usher does a serviceable job in the role, and looks enough of the part to impress, the narrative and focus of the movie comes apart.

The rush to get to Leonard meant making the choice to gloss through Duran’s reign as lightweight king. It’s a mistake. That reign was where Duran’s reputation was made. Without more context, the Duran seen insulting the wife of Ray Leonard arrives more abruptly than he should. For the next hour or so, the movie jumps between multiple stories.

Hands of Stone tries to maintain the political context, the story of a rise and fall, the tale of a relationship between fighter and sage guru, introduces a subplot about Arcel’s family life, and gets too lost in Leonard’s story. The choice to use DeNiro as the narrator becomes particularly muddled here as well.

This is also the part of the movie where some of the facts are just glaringly incorrect. It wouldn’t have taken much work to know CBS wasn’t involved in the Leonard-Duran rematch; it was ABC. Making this even more noticeable is the pantomime of the voice of Howard Cossell. Younger viewers might not notice or care but anyone who lived through any of the career of Cossell knows where he hung his hat.

Following the loss to Leonard, the dissolving of the Duran/Arcel relationship isn’t conveyed accurately. No, Arcel wasn’t in the corner for the final Davey Moore clash but he was in the corner for Duran against Wilfred Benitez along the way (the fight for which the actual prison training scenes would have taken place). Arcel goes to Carbo to get the Moore fight and that’s interesting since Carbo was already long dead by 1983.

The reality is Don King cut ties with Duran shortly after the Benitez and Kirkland Laing losses and Bob Arum picked Duran up. Connecting the contest to mob favors adds an extra seediness that plays more to the social perception of boxing than what was reality in this case. It was likely intended for narrative completeness but results in an unnecessary caricature of the sport.

The fight scenes in the movie are a mixed bag. They aim for realism and try to capture memorable images from famous fights as accurately as possible. It’s a commendable attempt but it’s so precise at times as to lose authenticity.

Overall, for anyone who hasn’t seen it, Hands of Stone is one of those movies that’s there for the interested but doesn’t demand a viewing. Readers would be better advised to read Christian Giudice’s biography, also titled Hands of Stone, or see much of the same story in ESPN’s 30 for 30 documentary, No Mas.

Good review of the movie, but I was expecting more than a review, nothing personal. You are still one of the best writer. :boxing:

[QUOTE=a.rihn;20479412]I would also love to see reviews of older pictures, like City for Conquest or Somebody Up There Likes Me. Lotta interesting old classics in the genre.[/QUOTE] I'd add The Harder They Fall, as well. Maybe the original Body and…

[QUOTE=Angeljuice;20482926]I'm aware of Rocky's success and critical reception. I have a degree in Film and Television production and work in the field as both a director and camera operator. I don't like a lot of "classic" films and disagree completely…

[QUOTE=CubanGuyNYC;20481178]A lot of people would disagree. The Academy doesn’t always get it right, but any film that gets ten Oscar nominations definitely isn’t bad. Rocky won best picture, best director and best film editing. Stallone was nominated for best screenplay…

[QUOTE=crold1;20481252]Agree. The critics bemoaned it winning over Network, All the President's Men, and Taxi Driver...but it's the one the most people have gone back to see the most number of times for a reason. It's timeless. One of the great…