With good reason, 1976 and 1984 take up a lot of the air when people remember the great US Olympic teams.

They weren’t the last great teams.

While Gold has been sparse since 1988, the 1988 team faced a fuller slate of the world’s best than the 1984 squad did and managed three gold, three silver, and two bronze medals. Considering the infamous silver awarded to Roy Jones, it’s a team that can get lost in the shuffle.

It’s influence on the decade to come can’t be. Jones was one of the two best fighters of the 1990s with Pernell Whitaker. Riddick Bowe rode his silver medal to the heavyweight crown and a co-starring role in the great heavyweight rivalry of his time with Evander Holyfield.

Further down the scale, silver medalist Michael Carbajal became an American attraction in a weight class still less than two decades old when he began his career. Turning pro at Jr. flyweight against a then 1-0 future titlist in Will Grigsby, Carbajal cut a quick swath toward his first title shot, winning his first 14 fights. Just a year and a half into his career, opportunity was knocking with a packed house in his hometown of Phoenix, Arizona and a national television audience viewing on ABC’s Wide World of Sports.

Like Carbajal, Thailand’s defending IBF titlist Muangchai Kittikasem wasn’t wasting time with his early career. After some time in the Muay Thai ranks, Kittikasem turned to professional boxing in 1988 and won his title in 1989 via split decision over Filipino Tacy Macalos. It was only Kittikasem’s seventh start. Kittikasem stopped Macalos in the rematch later that year and defended twice more in 1990 to set the stage for his fourth attempted defense against Carbajal. 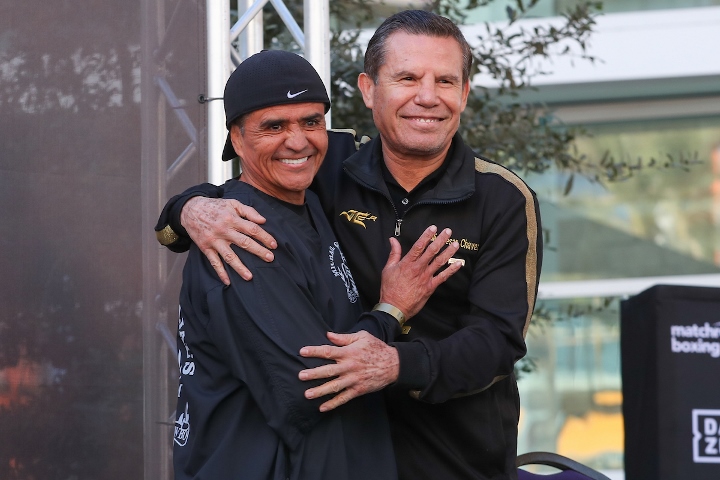 Carbajal immediately works to establish his jab, firing several before Kittikasem begins to return fire with his own. Carbajal tries and misses with a lead right to the head and left to the body. Another Carbajal left to the body is countered by a Kittikasem shot upstairs. Carbajal lands a pair of hard right leads. Kittikasem comes forward, trying some combinations and snapping Carbajal’s head with a jab. Carbajal fires a testy combination before the bell.

Both men are stepping into their shots early. Kittikasem lands a hard right and presses the action. Carbajal weathers and lands a ranking right. Kittikasem lands a blistering right and Carbajal replies with a left. Both men exchange hard at mid-ring. A left from Carbajal stuns Kittikasem and the challenger attacks. Kittikasem keeps his wits and punches back but takes the worst of it down the stretch of the round.

Carbajal digs a left hook and long right to the body in the early going. A Kittikasem jab puts Carbajal off balance but it is Carbajal’s arsenal on fuller display as the seconds tick by.

Kittikasem is still working the jab as Carbajal chips away at the body a shot or two at a time. Kittikasem lands a right and left at mid-ring, then another pair of the same as Carbajal boxes and circles. Kittikasem gets Carbajal near the ropes with sweeping rights more than once, bruising the right eye of the challenger. Carbajal slings back and finally finds the target, a right and short left to the head dropping Kittikasem. The champion rises but is dropped again just before the bell, a right hand sending him tottering to the ropes which just keep him up. The referee issues a second count and Kittikasem survives to head back to his corner.

A counter right from Carbajal wobbles Kittikasem but the Thai battler stays up and keeps punching back. Hurt to the body, Kittikasem alternately circles the ring and moves to fight off the ropes to get some air. Off the ropes, he lands hard enough to keep Carbajal alert. Back at mid-ring the pace slows and Kittikasem lands a snapping right to the head in the final thirty seconds.

The champion is on the front foot to start, walking into a lead right and missing two blows in return. With Carbajal on the ropes, Kittikasem opens up with rights, lefts, and uppercuts. Carbajal handles the leather and starts moving. Kittikasem is still landing more, hard rights giving him hope until a harder right from Carbajal sends him down for the third time. A rubber legged Kittikasem beats the count and takes some hard shots as the bell mercifully announces reprieve.

Carbajal comes right out of the corner looking for the finish. He shoots two hard shots to the body, followed by a right and left uppercut, and finally two right hands that send Kittikasem down in a heap. The champion is up almost immediately but referee has seen enough and Carbajal is a professional champion for the first time at :14 seconds of the seventh.

Michael Carbajal stopped Thailand’s Muangchai Kittikasem in the seventh round of a battle of unbeaten 108-pounders Sunday afternoon and became the first 1988 U.S. Olympic boxer to win a world professional championship. And afterward, nearly everyone was predicting this bout would be the start of something big for boxing’s little guys...The gate was $250,732, easily an Arizona pro boxing record and believed to be the largest U.S. gate ever for a light-fly or flyweight fight.

Ring’s Phil Woolever, in the December 1990 issue, spoke to the value provided for the gate the fighters drew, saying the fans were “rewarded with a fine brawl that was broadcast live by ABC and via satellite to Thailand.” A fine brawl it was but it was all part of a bigger plan for Carbajal.

The dream, in 1990, was for Carbajal to be the first million dollar flyweight. Promoter Bob Arum was selling the idea early as relayed by Sports Illustrated’s Richard Hoffer:

In other words, Carbajal has everything to justify a million-dollar purse except an opponent. The lower weight divisions are dominated by foreign fighters the U.S. pay-per-view audience has never heard of. Arum hopes to solve that problem by building up Humberto Gonzalez of Mexico, the WBC light flyweight champion, whose style and charisma are Carbajal-like. "But I've got to get Gonzalez on TV," says Arum. "People know him in Los Angeles and Phoenix, but not in New York or Philadelphia."

While Carbajal was on to bigger and richer things, Kittikasem was far from done. The Thai would win two rebound fights before spending 1991 and 92 ending the careers of two of the great Asian fighters of the 1980s. In February 1991, he jumped all over countryman and two-time lineal and WBC flyweight king Sot Chitalada, scoring a sixth round stoppage in a fast paced affair. In his next fight four months later, Kittikasem would rise from the deck three times to stop future Hall of Famer Jung Koo Chang in the final round of a battle that, in the YouTube and streaming era, might be recalled more broadly as one of the great fights of the decade. It was Chang’s last fight and only stoppage loss.

Kittiksaem would defend once more before a rematch with Chitalda in 1992, stopping the elder man for the second time, this time in nine rounds. It would be Chitalda’s last fight; only Kittikasem ever stopped him. In his next defense in June 1992, Kittikasem would be stopped by the excellent Yuri Arbachkov in eight and then again in nine in their March 1993 rematch. It would be the last title fight for the two-division titlist who fought only four more times, retiring with a mark of 25-4.

Carbajal would get to his million dollar showdown with Gonzalez but not until 1993. Before that memorable clash, Carbajal would run his record to 27-0, defending his IBF belt six times. In March 1993, Carbajal came off the floor twice to dramatically stop Gonzalez in the Fight of the Year, adding the WBC strap to his mantle. Carbajal would defend the unified belts twice before losing a decision to Gonzalez in the rematch in February 1994.

Carbajal mostly won from there, winning three more major titles (one more IBF, two WBO) but losing along the way to Gonzalez in the rubber match, Mauricio Pastrana, and Jake Matlala. In his farewell fight, well behind on the cards, Carbajal stopped a young Jorge Arce for the WBO crown in the eleventh round. It was one last thrill from one of the great little men of any era.

Carbajal would retire with a mark of 49-4 and entered the International Boxing Hall of Fame in 2006.

Man carbajal is one of the greatest lower weight fighters off all time he can hit like a MW.

I was at that fight. Brings back memories, thanks.

Carbajal TKO against a green Jorge Arce for the WBO title was a shocker moment to me. Also, his name shine in the resume of Carbajal. :boxing:

Hearnbots and Matchroom groupies be like “who is Michael Carbajal?????”

Thanks for this. What an entertaining scrap that was. Carbajal's first shot at a title after only one year fighting as a pro. Bob Arum had a lot of faith in him.