There are dreams we dream for ourselves.

There are those dreamed by the people who raise and love us.

There is the life lived in between. The most lucrative option is often the most seductive, the most entrapping, the most likely path followed. Young Joe Bonaparte believes that a “a prizefight is an insult to a man’s soul,” but as the cash adds up and the glory multiplies, is his soul something he is willing to do without?

It’s the question at the heart of Rouben Mamoulian’s 1939 adaptation of the Clifford Odetts 1937 play “Golden Boy.” While far from perfect, the movie was an important early piece of the way boxing’s portrayal on-screen would be shaped. Complete with a disapproving family, commodifying management, heartless mobsters, the spectre of death, and the woman who redeems, the pieces of many a future fistic trip to the silver screen is on display.

The movie was also a critical early piece in the career of the great William Holden. In his star making role as Bonaparte, we see the charisma and presence already there but not of the weary and learned cynicism Holden would add as time went on. Holden’s was a stardom interrupted by World War II. Later work in Sunset Boulevard, Bridge on the River Kwai, The Wild Bunch, and Network lend merit to the value of life experience to the enhancement of talent. 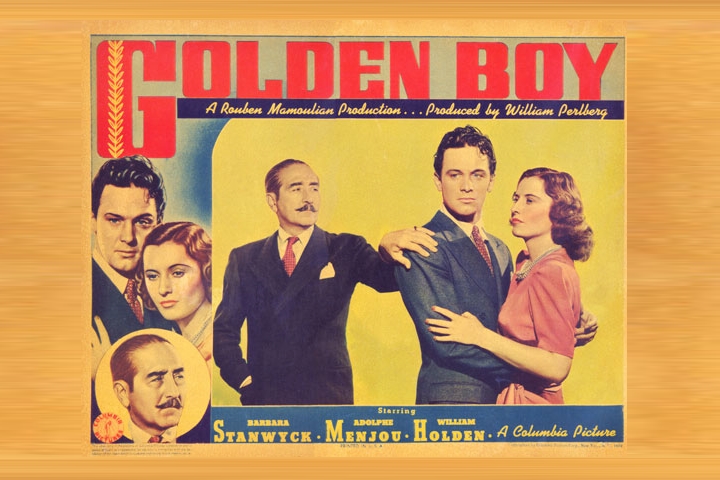 Lending Golden Boy extra value in the career of Holden is the friendship forged with the wonderful Barbara Stanwyck. The more experienced actor of the two, Holden credited Stanwyck with saving his place in the film and there was a friendship that endured through the decades. Stanwyck often steals the show when she’s onscreen, first as the intended of Bonaparte’s married manager, later as the lady whose heart is stolen, and always as the person who has been around and sees the angles before they arrive.

Stanwyck arguably has the best line in the movie when she, referred to as someone’s girl, retorts, “I’m my mother’s girl.”

The story of the movie borders on cheese, but not in a bad way. Bonaparte is a talented violinist whose father, an Italian small business owner played by Lee J. Cobb with energy if dated caricature, wishes to see him continue to pursue his music. Bonaparte has other ideas, begging for a chance to fight before recognizing the fight game’s potential damage to who he really is and then chasing the dollars anyways.

As he says to his father, he’s carried around a violin all his life and never been rewarded as quickly as he is with boxing. The obvious juxtaposition of Bonaparte’s hands as tools of art and violence, and the damage boxing inflicts his ability to play, isn’t subtle.

For a movie about a boxer, there isn’t a ton of boxing portrayed. Golden Boy is more concerned about what goes on between the fights and the human effects. Boxing is a sounding board in this case for a larger parable about the decaying effects of the pursuit of fortune. Understanding Odetts background, and sad future, helps to frame the story. Odetts was a target of, and ultimately cooperator with, the House Un-American Activities Committee.

While the film is not a line-by-line adaptation of the play, including a very Hollywood change to the tragic conclusion on stage, its roots in theatre are hard to miss. The dialogue spits out at a rapid pace with several lengthy exchanges between characters. It keeps things moving even if it means most of the characters on screen are there to hit their single note and no other.

So how is the boxing in the movie?

William Holden was a hell of an actor.

Bonaparte’s first fight is cut well and ends quickly with a frenzied montage that mixes in with crowd and character reactions. A second montage of Bonaparte barnstorming through the ranks carries out to similar effect. We don’t get an extended piece of ring action until the climactic fight scene. By then, Bonaparte has gone Anakin, aligned himself with a gangster, and needs only one more win for a shot at the title.

Holden’s footwork, right hand, and balance are unorthodox to say the least. Lots of flailing and movement at least keep the picture moving. It’s instantly noticeable in the scene that Bonaparte’s opponent, Chocolate Drop, might have a little more experience in the fight game. Even as he’s pulling his punches they look like, well, punches.

Quick research reveals the uncredited performance belonged to one James “Cannonball” Green. Green was a journeyman who retired with a modest record of 10-7-8 but in 1935 managed a draw with the great “Slapsie” Maxie Rosenbloom.

The climactic fight scene is most effective in how it features the crowd as part of the action. Mixing reactions both aggressive and comical, the director indicts the audience as part of something clearly intended to be portrayed as wrong. It’s a sort of two-faced moralizing that ignores its own hypocrisy in using the visceral thrill of boxing to sell a ticket to the cinema.

Following the final fight scene, Bonaparte is left to confront the moral dilemmas of the film one last time. A quiet scene with the family of his opponent is one of the best of the movie. Will Bonaparte continue to take the money, and further erode his soul, for a shot at the crown?

Or will he pick up his bow for good?

It only takes a breezy ninety minutes to get the answer.

Golden Boy isn’t the best boxing movie of all time or even the best example of this strain of boxing story. It’s still a worthy watch for those interested in seeing some of the foundations for boxing fiction as we’ve come to know it.

Golden Boy isn’t available on Blu-Ray but can be purchased on DVD at Amazon.