Following on the heels of several fight card postponements and cancellations late this week in response to the spread of COVID-19, today it was announced the long awaited World Boxing Super Series final between Mairis Briedis and Yunier Dorticos is moving to May. Last night, starving fight fans were treated to cards on ShoBox and Telemundo but the live action will be sparing in the coming weeks, if not longer.

Just because we don’t have much new boxing coming, it doesn’t mean there aren’t still plenty of corners to turn to find the boxing fix. Boxing has a rich library of classic fights, films, and books to pass the time. This is as good a time as any to tap the resource with a new series: Boxing Without Boxing. Throughout the duration of the overall lapse in sport, this series will look at offerings from all three of those areas to provide thoughts and recommendations for fight fans.

In terms of fights, readers are welcome to get involved. Feel free to email, comment in the forum, or tweet @roldboxing with classic title fight suggestions. If they are widely available on YouTube, and this scribe has never seen them or simply wants to see them again, the suggestion will be credited while the fight is reviewed in a future chapter of Boxing Without Boxing.

For now, the first tap for this scribe will be a trip back to the Golden Age of Cinema. Last Saturday, following the surprising upset win by heavyweight Robert Helenius over Adam Kownacki, the mood for boxing was still not satisfied. Sitting on the DVR was a 1942 classic on a long list of boxing films still unseen by these eyes. 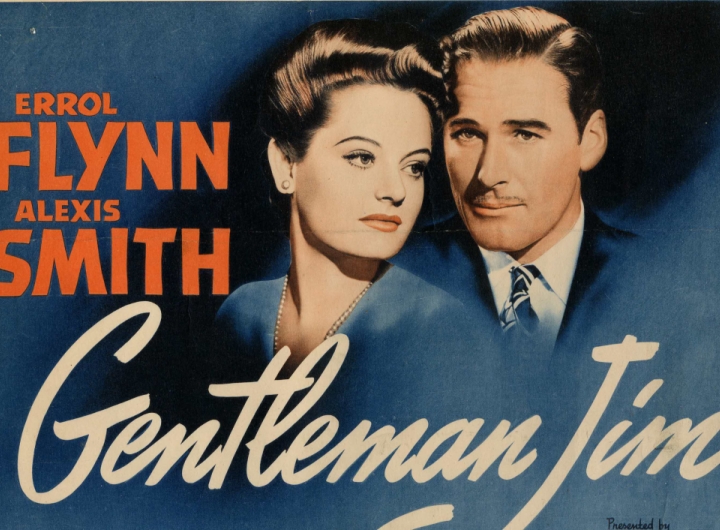 Gentleman Jim, released by Warner Brothers, is a loose adaptation of the life of one of the most significant figures in the history of the sport. James J. Corbett (1866-1933) is the man who ended the reign of the bare fisted king of the late 19th Century, John L. Sullivan. Their New Orleans encounter, won by Corbett in the 21st round on September 07, 1892, was a seminal moment in the transition to the gloved era of the sweet science we all now enjoy.

Like most biographical movies, Gentleman Jim plays loose with the facts but does so in a highly enjoyable, often hilarious romp. Long hailed as one of the best of boxing movies, it lives up to its reputation.

Starring Errol Flynn, one of the great stars of his time if a controversial figure in the years since his death, the movie takes great care to tell a character story while paying romantic homage to the sport. Let’s deal with the latter first.

Corbett’s reputation and legend is in part based on his more scientific approach to the sport. The employment of footwork and movement to eventually topple Sullivan is steadily established in the film as it builds to its climax. Great care is given to the filming of the way Flynn-as-Corbett’s feet shift around the canvas in each of the fight scenes. From the first sparring session with a coach at the Olympic Club in Corbett’s native San Francisco, the idea of Flynn as an artful mover and counter-puncher is firmly established.

The film also captures the then-ongoing transition of boxing in the United States from outlaw, often illegal, activity to mainstream sport. The opening scene sees Flynn and his best friend, portrayed by Jack Carson, attending a bare knuckle battle raided by the police. The madcap escape that follows, as gentlemen and ladies alike flee the scene while the battlers keep swinging, sets an early tone for the film. It also gives a glimpse at true stories of similar moments recounted in the real history of the sport.

In a later scene, Corbett battles on a barge, the large ship packed with fight fans who, again raided by police, leap into the water to swim their way from arrest. There really were fights held at sea in those days to escape the authorities. Audiences in the 1940s would have been as removed from that era as fans today are from names like Ali and Frazier. Seeing the barge scene might then could have felt like living history with a resonance someone watching today might not feel as keenly.

Combined with a montage of Corbett’s barnstorming efforts to move his way to contention and the upper crust social club combats, it’s fair to say the movie may have well captured the spiritual memory, if not the full authenticity, of the time it recalled.

Aside from the boxing elements, Gentleman Jim succeeds best as a romantic comedy. Alexis Smith portrays love interest Victoria Ware in a battle of wits just shy of Grant and Russell in His Girl Friday. Like any romantic comedy, there is never any doubt where the movie will end up for Smith does a great job of holding her own, and in many cases stealing scenes, from Flynn. When Corbett can’t come up with the stake he needs to challenge Sullivan for the title, it is she who secretly puts up the funds. She makes it clear she’s doing it in hopes the braggadocious Corbett gets what’s coming to him.

This is, of course, a big moment where history diverges. Ware is a fictional character. The real Corbett was already married in 1886, the first year of his professional career, and would go on to marry twice more after a divorce in 1895. The fiction likely makes for better screen time than facts. When Flynn finally takes Smith in his arms after he’s won the crown and she declares “I’m no lady,” both actors have earned the payoff delivered to the audience and look like they’re having a blast.

Flynn and Smith aren’t the only ones. One of the charms of Gentleman Jim is how much fun everyone seems to be having on screen. This is particularly true for Alan Hale as crusty manager/trainer Bill Delaney and Ward Bond as the great John L. Bond plays Sullivan with a twinkle in his eye, less the surly, nasty Sullivan of lore and likable king loving his every second on the throne. When Bond delivers his title belt to Corbett at the film’s end, he is almost regal in the honor and poise he provides the moment. Director Raoul Walsh delivers the scene, and the movie as a whole, with a reverence suggesting the cultural stature of the figures on screen.

Then of course, there is Corbett’s family. Portrayed as rambunctious and ready to scrap at any time including with each other, they are set against the backdrop of Corbett’s often comical efforts to move into higher society. The Corbett family provides steady entertainment from start to finish. The declaration, “The Corbetts are at it again,” carries an extra element of joy to the final line.

If there is an objectionable element to the film, it is found in fleeting portrayals of race or the lack thereof. One of the most important fights of Corbett’s career on the way to the title, a 61-round draw with the great and avoided Peter Jackson, a victim of boxing’s color line, is discussed but is portrayed only by newspaper headline with no imagery of the bout or its fight posters. A hotel servant near the end of the film is portrayed in the wide-eyed, servile method too often employed for actors of color in that era. Viewed through a modern lens, they are fleeting but sad moments.

Overall, this movie comes highly recommended for any fan of the sport and even those for whom boxing holds little appeal. There’s enough elements of real history mixed into what any movie should be: a chance to be entertained for a couple of hours.

Interested readers can rent or purchase Gentleman Jim on Amazon Prime or VUDU, or look for future airings on Turner Classic Movies.

There's a documentary on youtube called Gentleman Jim Prizefight Narrated by Liam Neeson. In it there's a couple of scenes taken from an old black & white movie regarding the Corbett/Fitzsimmons fight. Doe's anyone know what it is?

Excellent recommendation that is good overall to all readers, especially boxing fans. Like [URL="https://www.boxingscene.com/author/Cliff-Rold"][/URL]Cliff Rold said, this is the time to learn the roots of our favorite sport. :grouphug::cool3: