Mexico has had more than its share of great champions. Even now, thirty years and change after an errant attempt to return one last time in 1988, Ruben Olivares remains one of the nation’s most esteemed and beloved boxers. Twice the bantamweight champion of the world, and twice a titlist at featherweight after that, Olivares was one of the game’s best during the 1960s and 70s.

After an upset loss to Rafael Herrera in 1972, Olivares exited the bantamweight division for good after several non-title fights over the years above 118 lbs. The going at featherweight produced mixed results. He lost to Herrera again two fights later, stopped Bobby Chacon two fights after that, and then was stopped by Art Hafey in his very next fight after that.

Olivares was far from done. Following the Hafey loss in September 1973, Olivares won three in a row, avenged the Hafey defeat by split decision, and lined himself up for a shot at the vacant WBA featherweight belt (back when there was only one WBA belt at a time).

Panama’s Ernesto Marcel retired with the title following a final win over a young Alexis Arguello in February 1974, leaving Olivares to be paired with Japan’s Zensuke Utagawa to fill the void. They would face off on what was the veritable home court of Olivares, the Forum in Inglewood, California. 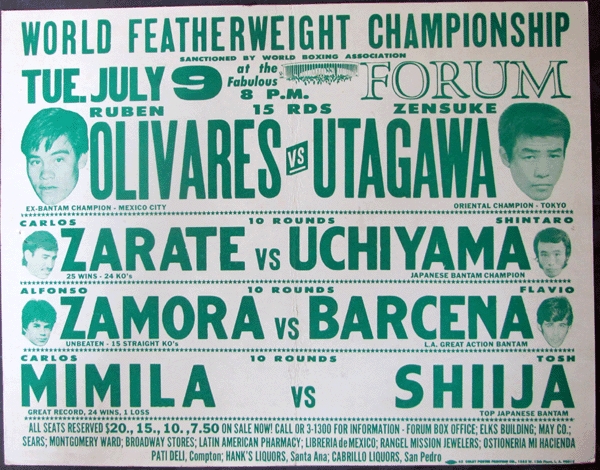 Olivares comes out circling to his left, pawing with his jab to find the range on the pressuring Utagawa. Utagawa starts to reply with jabs of his own. As Olivares gets comfortable, he starts to work in his left and begins to come forward, landing his left hook and straight right but also walking into a nice right hand from Utagawa. It is a careful three minutes from both men.

Intense but careful action continues with both men looking for hard counters. Olivares continues to spend more time working the perimeter. Utagawa briefly has Olivares against the ropes but the Mexican veteran doesn’t stay there long. After six minutes, neither man has done much to establish dominance over the other.

Olivares starts to work in more creative combinations, including a left uppercut followed by a right hand over the top. Utagawa has some success at close range with a chopping right hand and some left hooks but is finding the target inconsistently. Olivares increasingly finds space to counter with the left hook as Utagawa comes forward.

A more assertive Olivares is on display in the fourth, planting hard with left hooks, largely to the head but with renewed attention to Utagawa’s body with both hands. Utagwa thinks he has Olivares trapped on the ropes late in the frame only to miss most of a series of shots against a target that is getting harder to find.

The best action of the fight so far ensues as Olivares increases his attacks. Utagawa knocks him off balance in an exchange, his right eyebrow thick with vaseline. Utagawa’s offense is largely reactive, the Japanese hopeful left trying to keep Olivares off him when Olivares lets his powerful hands go.

Olivares is in firm control. Utagawa is still firing, still looking for his path to championship glory, but he’s doing so with the appearance of a confused fighter. The more experienced Olivares feints and jabs his way to openings for big lead shots to the head and body, leaving Utagawa only to guess where the next piece of leather will come from

Shortly into the round, a short left hook catches Utagawa blind and wobbles his legs. A left to the body sends the shaky Utagawa towards the ropes and a fully triggered Olivares goes for the kill. A marksman like left hook sends Utagawa towards the floor while another behind it just misses. Utagawa beats the count and can only cover up with a token punch or two as Olivares attacks with both hands. A right uppercut sends Utagawa nearly flat to the floor for the second time, Utagawa rolling and rising once more. Under duress, Utagawa launches a wide right hand a second too late as a sweeping right from Olivares sends him down for the third and final time. Referee George Latka doesn’t bother to count as Utagawa remains on the floor well past any count of ten.

At 1:29 of round seven, Olivares is a champion for the first time at featherweight and third time in his career.

Describing the last three rounds and the conclusion of the fight, Ring’s Don Fraser wrote in the October 1974 issue:

The pace picked up in the fifth and Olivares went to work. He gave Utagawa a solid pasting in the sixth and then proceeded to drop him three times in the seventh. Following the third trip to the canvas, the Japanese was motionless and referee George Latka requested aid from Dr. Jack Useem, who quickly brought Utagawa around. Olivares had more to worry about from his fans, who gave him a ride on their shoulders to the dressing room.

Then as now, sanctioning body ratings don’t always make a lot of sense. Utagawa’s place in the bout was likely tough to fathom then on the basis of merit. Regardless, Utagawa was game, gave his best, and rose from the canvas twice with victory long out of view in the seventh. There is no shame in being part of the story of an all-time great.

Utagawa would never receive another world title opportunity. After two rebound wins, he was stopped in his final two fights in 1975, the last of them to future WBC 122 lb. titlist Royal Kobayashi. His final ring record stood at 27-7-2 (8 KO).

While not a must-see fight, those curious about seeing a significant moment in the Hall of Fame career of Olivares, to see the mix of boxing ability and power that made him special against an opponent with little answer for them, will find much to enjoy.

As was the case at bantamweight, Olivares would find winning the title easier than keeping it. In November of 1974, Olivares was stopped in his first defense at the hands of Alexis Arguello, again competing at the Forum. It would be one of the great featherweight title fights ever contested. Olivares still wasn’t done, coming back two fights later to win his final title, WBC featherweight version, with a second round stoppage of Bobby Chacon in the first of three straight appearances at the Forum marking the beginning of the end of his time as a champion.

Olivares, after stepping away from the sport in 1981, returned for single nights in 1986 and 1988, earning a draw and a stoppage defeat respectively. His final ring record stood at 89-13-3 (79 KO) with eight losses coming in his final 19 fights.

Olivares was elected to the International Boxing Hall of Fame in 1991.

That fight was bloody pump with excitement. One of the lost relics people forgot, but hardcore boxing fans know. :boxing:

[QUOTE=Mario040481;20477255]Have you watched Olivares vs Kanazawa II? Excellent back and forth fight.[/QUOTE] Maybe years ago. Thanks for the rec

[QUOTE=crold1;20477198]My pleasure. Next fight: Spinks-EM Muhammad. Before then, a review of the Hands of Stone movie.[/QUOTE] Have you watched Olivares vs Kanazawa II? Excellent back and forth fight.

[QUOTE=Young Bidness;20476940]Thanks for this Cliff. We need more articles like this. Surgical analytics. Gonna make some popcorn later and scout the best quality version online[/QUOTE] IF you find a better one, do share, please. I've been tracking own Olivares fights…