In an interview, Joshua threatened to "give [Whyte] a punch" at the Alexander Povetkin fight on August 22 at Matchroom's Fight Camp.

Whyte will stake his mandatory shot at the WBC title, when he faces former WBA champion Povetkin.

Joshua will be watching the fight from ringside. 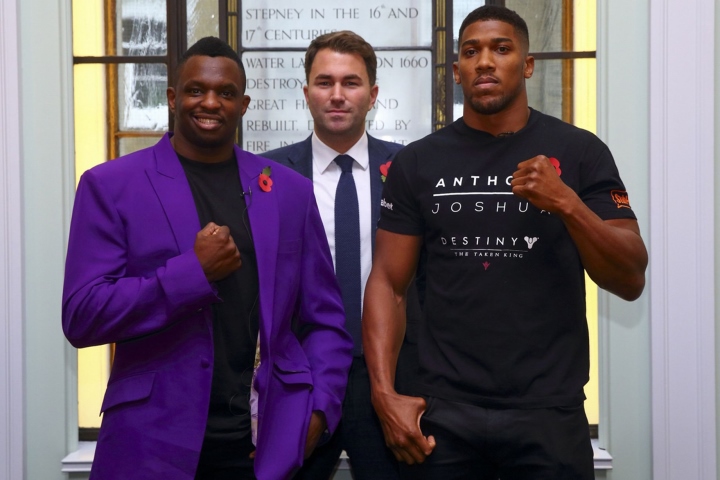 Joshua and Whyte have traded words since their heated showdown in December of 2015, which saw Joshua win with a seventh round knockout.

If Joshua decides to enter the ring and attempts to generate some drama in the aftermath of the August 22nd main event - then drama is exactly what he will get, warns Whyte.

"He might get a box, if he does that," Whyte told Sky Sports' Toe 2 Toe podcast.

"If he does that, he might get a box, there and then, one box. He thinks it's a game, but I don't play games with these guys. They think it's a game, scream and shout and get in each other's faces, but if he does, he will get a box."

There have been points when Joshua and Whyte have rooted against each other - but Whyte is not entirely sure if Joshua wants him to lose to Povetkin.

"I don't know and I don't really care what he thinks or what he believes. I don't know, it's hard to say. He says one thing one day and the next day he says something else. There's no consistency with AJ," Whyte said.

"There's no consistency with him. He says this, then he says that. He just talks a lot of crap. I'm sick and tired of all these guys that's talking, talking, talking all the time."

Joshua is a phucking hypocrite, why didn't he go and sit at the Fury/Wilder 2 fight? I was at the fight and wished he was there and jump in the ring right after Fury mushed the [B]s[/B]hit out of the…

[QUOTE=Chinned;20698885]AJ vs Whyte would do big business and you'd be a fool to think otherwise tbh. Genuine, personal beef sells.[/QUOTE] AJ vs molina filled a stadium. So anyone can do that. Most of the uk fans are only there to…

[QUOTE=The plunger man;20698462]The fool was left unconscious dribbling and tangled up in the bottom rope and his eyes were rolling around like a fruit machine so Joshua don’t need to get in his face lol I actually want povetkin to…

100% not surprised. Joshua will sit ringside and threaten a guy when there's absolutely no chance of a fight being made.

How do you build hype for a future showdown when in the first one, you got KTFO?