Kubrat Pulev has drawn a lot more attention for what he did after defeating Bogdan Dinu than he did during their heavyweight fight Saturday night.

ESPN’s two-bout broadcast, which featured Pulev and Dinu in the main event, drew an average of 469,000 viewers, according to figures released by Nielsen Media Research. That was the lowest average viewership for a Top Rank boxing show that aired in prime time since ESPN struck an exclusive content deal with Bob Arum’s Top Rank Inc. in June 2017.

Before Saturday night, the average viewership of 488,000 for the show headlined by Jose Ramirez and Amir Imam in March 2018 marked the lowest total produced by a Top Rank/ESPN show. 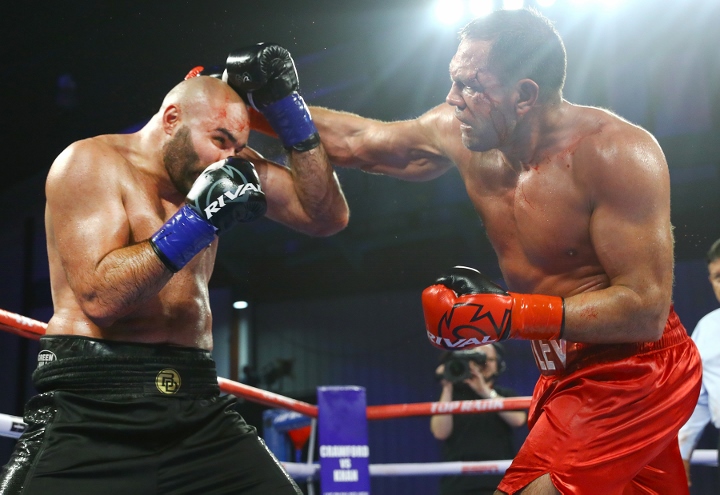 Bulgaria’s Pulev (27-1, 14 KOs) knocked out Romania’s Dinu (18-2, 14 KOs) in the seventh round at The Hangar in Costa Mesa, California. Pulev, the mandatory challenger for Anthony Joshua’s IBF heavyweight title, dropped Dinu three times during the seventh round of their scheduled 10-rounder.

The first knockdown didn’t count because Pulev hit Dinu on the back of his head after Dinu went down to one knee once he had absorbed various power punches. Referee Raul Caiz Sr. deducted a point from Pulev for his obvious foul and afforded Dinu ample time to recover.

After an extensive break in the action, Pulev knocked down Dinu twice more – with 1:39 to go in the seventh round and with 18 seconds remaining in it. The two knockdowns that counted also appeared to be the result of Pulev right hands that landed on the back of Dinu’s head, but Caiz considered those two knockdowns legitimate.

Pulev’s behavior following his victory was unusual as well.

The 37-year-old contender kissed a female reporter, Jennifer Ravalo, at the conclusion of an interview conducted in Pulev’s makeshift dressing room. Ravalo was credentialed by Top Rank to cover the Pulev-Dinu card for Las Vegas Sports Daily, a relatively new website.

Ravalo since has hired attorney Gloria Allred, who has handled numerous high-profile cases involving abuses against women. Allred has scheduled a press conference for Thursday to discuss the Pulev-Ravalo incident.

[QUOTE=Letsboxhoe;19624029]We get it you hate ward but stfu the ref ruled the beltline legal.[/QUOTE] Yeah, they ruled that above the beltline, which is one of many examples of why nobody should pay for boxing & I haven't in years. What…

The lowest viewing figures and a sexual assault case to follow. All in all, a good weekends business for Uncle Bob.

[QUOTE=////;19622730]Illegal streams are the way to go. Why financially support a sport where fights end like ward/kovalev II or hooker vs perez & nobody answers for it? Usually you can even choose the commentary you prefer from 3, 4 different…

[QUOTE=Greenfield02;19622415]Top Rank is Fn this up. If this ****ty match making continues its going to scare off ESPN from continuing with boxing once the contract is over. And that has nothing to do with boxing and everything to do with…