Luis Ortiz’s handlers apparently want at the absolute least what DAZN and Eddie Hearn were willing to pay Jarrell Miller for Ortiz to challenge Anthony Joshua on June 1.

And probably then some.

Multiple sources have informed BoxingScene.com that Ortiz’s representatives turned down Hearn’s $5 million offer for Ortiz to step in on what’s now five weeks’ notice for Miller. They asked for $10 million, $3.5 million more than what would’ve been Miller’s package for the fight had the boisterous Brooklyn contender not tested positive for multiple performance-enhancing drugs late in March.

Hearn is expected to make a counter-offer to Ortiz before finalizing a deal for Miller’s replacement. 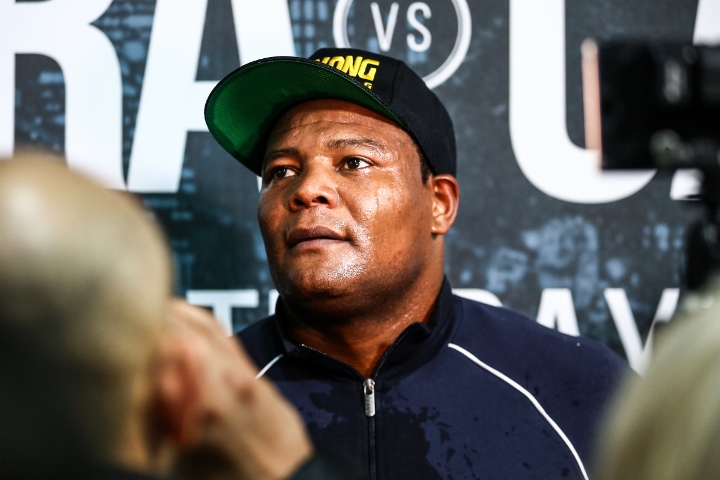 The 40-year-old Ortiz occupies a strong negotiating position because Hearn and DAZN need a credible replacement for the besmirched Miller. The other candidates considered most recently to replace Miller – Americans Andy Ruiz (32-1, 21 KOs) and Michael Hunter (16-1, 11 KOs) – are lower-profile fighters than Ortiz (31-1, 26 KOs, 2 NC), who has lost only to WBC champ Deontay Wilder.

Like Miller, however, Ortiz has failed multiple PED tests during his career.

Whomever he faces, England’s Joshua (22-0, 21 KOs), a mainstream superstar in the United Kingdom, will make his debut in the United States five weeks from Saturday night at Madison Square Garden in New York. Miller might’ve been a decided underdog, but he is undefeated (23-0-1, 20 KOs) and would’ve continued to sell their fight with his incessant trash talk.

The Cuban-born Ortiz doesn’t speak English, but he is the most reputable heavyweight available because Wilder and lineal champion Tyson Fury are contractually tied to competing platforms for fights scheduled for May 18 and June 15, respectively.

Wilder (40-0-1, 39 KOs), of Tuscaloosa, Alabama, is set to make a mandatory title defense against Dominic Breazeale (20-1, 18 KOs), of Eastvale, California, in a fight Showtime will televise from Barclays Center in Brooklyn. Four weeks later, Fury (27-0-1, 19 KOs), of Manchester, England, is set to meet Germany’s Tom Schwarz (24-0, 16 KOs) in a non-title encounter ESPN+ will stream from MGM Grand Garden Arena in Las Vegas.

Ortiz’s only incentive to turn down the counter offer Hearn is expected to make would be the prospect of what could be a comparably profitable rematch with Wilder. Multiple sources also have confirmed to BoxingScene.com that Al Haymon, who advises Wilder and Ortiz, has discussed with Ortiz’s team the possibility of a Wilder-Ortiz rematch taking place as soon as September.

Hearn revealed last week to Sky Sports News that he thought Ortiz ultimately might turn down this suddenly available chance to face Joshua because Haymon has promised him a rematch with Wilder.

Wilder survived serious trouble in the seventh round to knock out Ortiz 13 months ago at Barclays Center. Wilder knocked down Ortiz three times – once in the fifth round and twice in the 10th – before their scheduled 12-rounder was stopped last March 3.

Wilder-Ortiz II probably would be a pay-per-view fight if it were put together. September pay-per-view dates in the recent past typically have been reserved for Floyd Mayweather and Canelo Alvarez fights, but Mayweather is retired and Alvarez signed an 11-fight deal with DAZN in October to fight exclusively on a streaming service that primarily sells itself on not charging boxing fans for pay-per-view events.

Ortiz took the fight he believes he can win. He came close once, might shock the world. Then fight Joshua. Fans really forget that lives are at stake in boxing and losses can derail your career completely the way matchmaking…

[QUOTE=Sid-Knee;19784410]Team Ortiz have been contradicting themselves all over. They said it wasn't a lowball offer and that it was their fault that it didn't happen. They then came out to try and salvage their wreaked reputation by lying and contradicting…

And went ahead to rematch wilder for 1.5mil....hez got the best team in boxing history.

[QUOTE=Boxing lives;19781688]Team Ortiz said Hearn was lying plain as day. Soft Joshua fighting a blob. How pathetic. That fight should be in England where it belongs![/QUOTE] Team Ortiz have been contradicting themselves all over. They said it wasn't a lowball…

[QUOTE=Sid-Knee;19722759]Even though Ortiz and his team said it was their fault it didn't happen? You're my b1tch. Always will be. Now bow to me you backwards weirdo.[/QUOTE] Team Ortiz said Hearn was lying plain as day. Soft Joshua fighting a…