Joshua: I Have Four Major Belts, Fury Has One - And I'll Take It From Him!

Anthony Joshua is now on record in no uncertain terms of the only fight he wants next.

More questions than answers arose following Joshua’s 9th round knockout of Kubrat Pulev earlier this month, after which he was specifically asked about next facing lineal champion Tyson Fury. The response offered by the 2012 Olympic Gold medalist and reigning unified heavyweight titlist was deemed as cryptic, with Fury himself claiming that his countryman is scared to commit to such a fight. 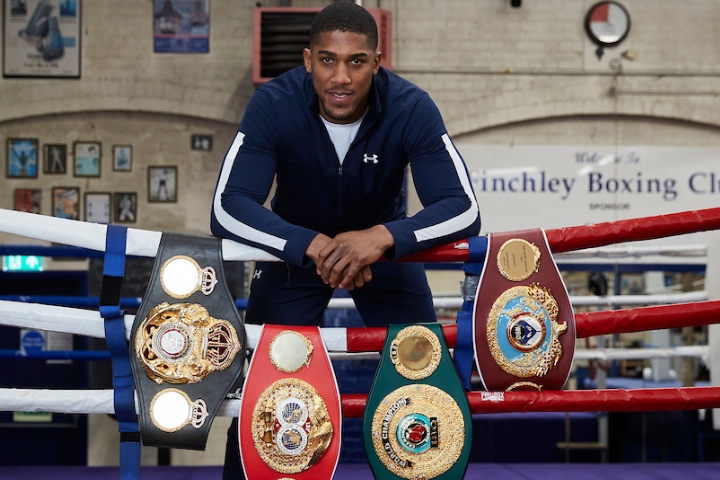 The long-awaited showdown between British heavyweight behemoths has been a hot topic all through a pandemic-stricken 2020. Manchester’s Fury (30-0-1, 21KOs) re-entered the title picture following a 7th round knockout of Deontay Wilder in their rematch this past February, reclaiming lineal championship status along with the WBC strap. The win came nearly three months after Watford’s Joshua (24-1, 22KOs) regained the WBA/IBF/WBO/IBO titles in a 12-round win over Andy Ruiz in their rematch last December.

Fury has not fought since the pandemic, while Joshua was forced to wait all year before landing on a December 12 date to satisify his IBF mandatory versus Pulev.

A super fight between the two is seemingly no matter a question of “if”, but rather when and where it will take place. The ongoing pandemic has resulted in many regions throughout the world not able to host events with fans in attendance due to social distancing measures. Joshua’s win over Pulev came with the maximum-permitted 1,000 fans, the only such event in the United Kingdom granted such honor with all preceding events taking place behind closed doors and with such a ruling now back in place for the region.

Nevertheless, location and stakes are mere formalities as far as Joshua is concerned. The main objective, he insists, is to get Fury in the ring before facing any other challenger. Such a fight will only enhance what many regard as the best résumé among current heavyweights.

“I’ve never turned away from a fight. I’ve fought six or seven champions [Writer's note: six fights involving five former or current tilists] in my short career. Tyson Fury is another one of them. There’s no reason why I’d see him different to any other. If Tyson Fury is down, I’m ready, I’m keen. I’ve got four of the major belts, he’s got one and I’ll take it from him.

“That being said, they’re in conversations now—my management team, my promotional outfit [with] the best way to put a package together that can lead us into 2021. Hopefully the pandemic will be done and we can bring some unity and a good energy to bring if we can announce this fight.”

Joshua obviously isn't going to disrespect the IBO as their champion is he? People nit picking on here. The point is Joshua has some belts and he wants to fight the guy who has the other.

[QUOTE=kingstip9;20973602]Would pay to see your face when Joshua quits for the second time. This time against fury 😂[/QUOTE]what the hell are you on about you total dlck head!! Go play with your mothers sphincter.

[QUOTE=jonnyc420;20975086]Never been stopped, ate the biggest puncher at HW best shot and got up. Remind me again what happened to that cruiserweight after that KD? Now tell me after that obese short HW dropped your boy what happened?[/QUOTE] No he…

[QUOTE=Boxviewer;20974652]Glass jaw, in comparison with Fury? Fury has been knocked down by a cruiserweight. I believe that AJ has a better chin than Fury.[/QUOTE] Never been stopped, ate the biggest puncher at HW best shot and got up. Remind me…