Joshua and Campbell captured gold medals at the 2012 Olympic games in London.

This Saturday night at the O2 Arena, Campbell will face one of the sport's pound for pound best, Vasiliy Lomachenko, for the WBC, WBA, WBO lightweight world titles. 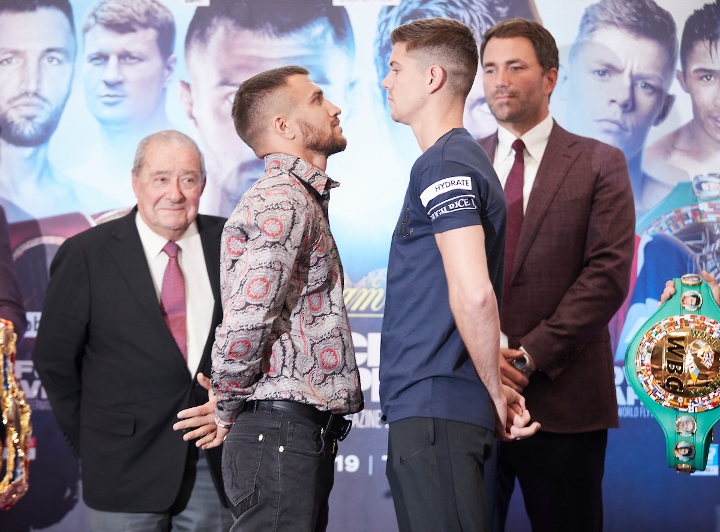 Joshua has advised Campbell come in there with a mountain of confidence and win the fight, round by round, with a very strong mental state of focus.

"Go in there and start saying affirmations to yourself - 'I am the greatest, I'm the champion, I can beat Lomachenko'. Just come to three words that you tell yourself every minute of every day so you start believing it. You have to really believe it. I'm talking about my own experience, you have to believe who you are and what you are able to achieve," Joshua told Sky Sports.

"Lomachenko wants to put you in a position where you're going to act and do things that aren't comfortable to you. So little feints where he'll jump at you. He's going to feint, he's going to move at an angle. Don't fall into the trap, just keep a good guard, keep your mind sharp and then as the rounds go on, stick to your game plan.

"Touch to the body, feint to the body, jab to the head and if you can start setting up certain shots as they start to land then build on that as the rounds go on because it's a 12-round fight. It's a marathon not a sprint. If he goes in there with that right mindset and takes his opportunity and seizes the moment he can go down in history."

Califire209 is a joke, most legend got losses and for what AJ has achieve, at this point he deserves some respect and u just gotta wait for rematch result.........LW got beat up and was advised to British Olympic team at…

Who the hell wants to take advice from a guy that just got his ass kicked and had Zero confidence in his last fight. How can a Fighter speak on a gameplan that he failed to execute himself. aj don't…

[QUOTE=Deontay Wilder;20023552][B]In other words, "Speak it, believe it, receive it!" Young disciple AJ has obviously been studying the teachings of sensei Deontay Wilder. But does he truly believe in himself? Can he rebuild his confidence in only a few months?…