Canelo's Trainer on Golovkin: He Looked Bad In His Last Fight, A Bit Slower

Whether or not Canelo Alvarez ever decides to give Gennadiy Golovkin a third fight, his trainer clearly thinks it will not be as competitive as the previous two other occasions.

Eddy Reynoso recently noted that he has spotted a decline in the Kazakh middleweight, especially in his post-Alvarez fights against Sergiy Derevyanchenko and most recently Kamil Szeremeta. 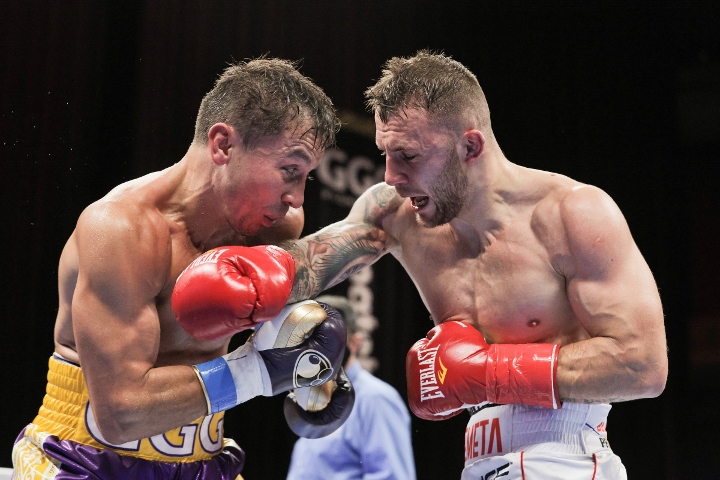 Golovkin (41-1-1, 36 KOs) squeaked by top contender Derevyanchenko to win a split decision in 2019. He had a much easier time with the undistinguished Szeremeta this past December, knocking the Pole down four times en route to a seventh-round stoppage.

“Well I haven’t seen him (Golovkin) the same. I see him slower,” Reynoso told Little Giant Boxing. “With Derevyanchenko he looked really bad. A lot of people said he wasn’t well prepared. In his last fight (against Szeremeta) he looked bad as well.

“I saw him a bit slower against Szeremeta, a fighter at mid-level. He’s a fighter who always prepares well, he’s very disciplined but I think his age is catching up to him. It’s not easy. He’s a 38-year-old boxer coming off a long amateur career. As well as staying at one weight class is very difficult.”

Golovkin turns 39 in April. His first fight with Alvarez (54-1-2, 36 KOs) in 2017 ended in a controversial draw in which many observers believed Golovkin deserved to get the decision. The second fight, in 2018, was also close, but much less controversial, and the decision ended up going to Alvarez, who applied a far more aggressive strategy than before. A third fight seems natural, but with the bad blood that stills exists between the two, that is far from a foregone conclusion.

Reynoso says Alvarez’s ability to adjust was the key in the second fight. Coupled with his belief that Golovkin’s quickness has eroded, Reynoso clearly believes his charge would dominate his Kazakh rival should a third go-around ever materialize.

“The first fight we fought it with counter attacks in the middle of the ring, then I realized in the first fight GGG didn’t know how to move fighting backwards,” Reynoso explained. “Golovkin always wants to move forward. In the second fight we changed the strategy. We wanted to push him back from the first round. The fact that Saul fought him moving forward made him (Golovkin) lose his focus for three to four rounds.

“Then when he tried to change his game plan, we switched and started to counter attack him moving backwards as well as pushing him back. In the end Golovkin never found a way to decipher our strategy which Saul was changing round by round. That ended up giving us the victory.”

[QUOTE=Elastic Recoilz;21023787]I've tried to entertain your crap but you're too ignorant and won't budge on thinking Golovkin ducked fighters. Now please indulge me - I want your answers on the following 5 things YOU HAVE TO ANSWER THEM if you…

[QUOTE=aboutfkntime;21023339]the proposed fights were courtesy of Golovkin's hollow promises he wrote checks with his mouth that he could not cash with his fists stop making dumb excuses you fanboy clown Mr " [I]anyone from 154-168[/I] " killed FOUR [B]HUGE [/B]fights…

[QUOTE=Elastic Recoilz;21023277]We've already addressed this haven't we... [B][SIZE="3"]The proposed fights [/SIZE][/B]"hype" etc as you put it were courtesy of the Hermann brothers and Tom Loeffler - the managers and promoters directing and controlling Gennady's career. He has never ducked or…

[QUOTE=aboutfkntime;21023226]a typical Hypekin fan... I expose him, and they start talking about someones anus LMAO they lied to you kid FACT: Bullshltkin fell WAAAAAY short of his [B]OWN [/B]hype, let alone yours[/QUOTE] We've already addressed this haven't we... The proposed…

[QUOTE=strykr619;21022632]Was he clean in the rematch thou? Clen is used primarily as a masking agent. Canelo won't make the mistake again and more then likely has switched off to designer made PED's that are tailor made to his physiology. Canelo…