After finally putting Andy Ruiz Jr in his rear-view mirror, Anthony Joshua (24-1, 22 KOs) returned to his explosive ways as he knocked out Kubrat Pulev (28-2, 14 KOs) in the ninth round at the SSE Arena, Wembley, to clear the way to a Tyson Fury fight next year.

There was a bit of everything from Joshua. He looked good when working behind his jab, but when he got Pulev going, having started his downfall with a right uppercut he was trying all night, he ended things in brutal style.

Pulev was down twice in the third and when Joshua could not finish the job, he backed off and boxed his way through the middle rounds before stepping on the gas in the ninth and knocking Pulev down and then out.

It was a patient display but not one completely free of anxiety. As Pulev’s confidence grew in the middle rounds he got in range to throw heavy shots at Joshua, which he ducked or backed away from. But both held a lot too and were warned for punching behind the head.

Ultimately, Joshua did was he was supposed to against Pulev and had he finished the job in the third round, which he was very close to doing, it would have been a sensational performance. By going another six rounds, he displayed a decent maturity in not getting carried away, although a win over the 39-year-old Bulgarian will not have a huge baring of his chances against Fury, the WBC champion.

The 1,000 fans that were in attendance – including Floyd Mayweather - made the noise of many more and went home happy, as Joshua retained his WBA, WBO, IBO and IBF titles. 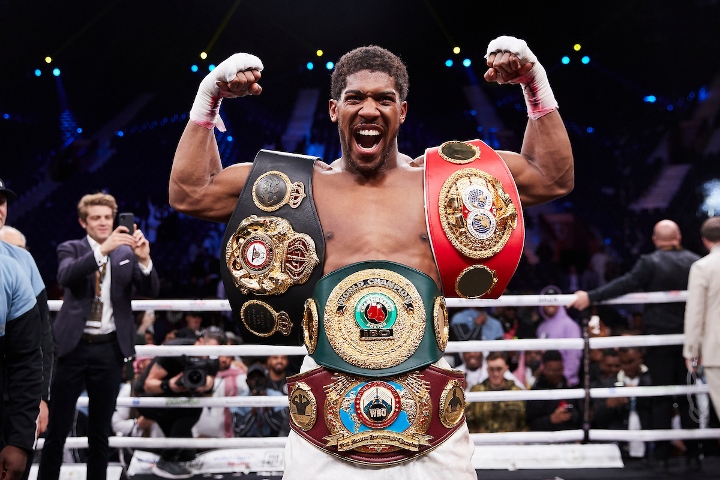 In the second round, Joshua opened up with a four-punch combination that brought a smile to Pulev’s face but Joshua then used his jab well, controlling the range.

Joshua exploded in the third round, as he landed a hook and then a huge uppercut that rocked Pulev back into the ropes. Joshua opened up, pounding away at Pulev who then turned his back and headed into the corner, receiving another right to the body that put him on the floor.

He did not seem in the mood to let Pulev off the hook, as he landed another crushing uppercut to send him down again. But Pulev survived the round and landed a shot after the bell, which Joshua responded too

Joshua took the fourth off, leading to concerns that he might have gassed, and he tied Pulev up after being caught by a right hook.

He landed another in the fifth as Pulev got more ambitious, although Joshua caught him with a long right cross and an uppercut.

Joshua was by now backing away a lot and not really using his jab. Instead, when Pulev threw a shot, Joshua would duck it and then hold. Pulev was then guilty of rabbit punching up close, which referee Deon Dwarte failed to clamp down on.

Joshua began the seventh with another good hook and an uppercut, but Pulev landed a big right that drew oohs from the crowd.

After another quiet eighth, Joshua went to work in the ninth, pumping out the jab, one of which he turned into a left hook that hurt Pulev.

Joshua pounced. He tried 4 uppercuts in a row, one of which rocked Pulev’s head back. He kept  trying with the uppercut and hurt Pulev again before he then crumbled to the floor.

He rose, but looked hurt as he nodded to the referee. Joshua walked in and landed one huge right that laid Pulev out on his back. Dwarte counted but try as he might, Pulev had no chance of beating the count.