Weights: Valdez, Frampton on Point - Gutierrez is WAY OVER

Oscar Valdez and Carl Frampton venture into new territory, although just one will officially get to make his junior lightweight debut on Saturday while the other is left to the linger in the aftermath of a weigh-in gone horribly wrong.

The two were due to appear in separate bouts in Saturday evening’s ESPN+ livestream from The Cosmopolitan in Las Vegas, Nevada. However, Mexico’s Valdez (26-0, 20KOs) might see a delay in his journey following Friday’s weigh-in. The two-time Mexican Olympian weighed 129.8 pounds for his first fight since abandoning a featherweight title reign which featured six successful defenses.

His countryman and scheduled opponent for Saturday’s intended 10-round main event, Andres Gutierrez (38-2-1, 25KOs) didn’t exactly do his part, showing up to the scales at an announced 141 pounds. In missing weight by more than two full weight divisions, Gutierrez was automatically removed from the show.

Top Rank event handlers are working on a contingency plan as this goes to publish. 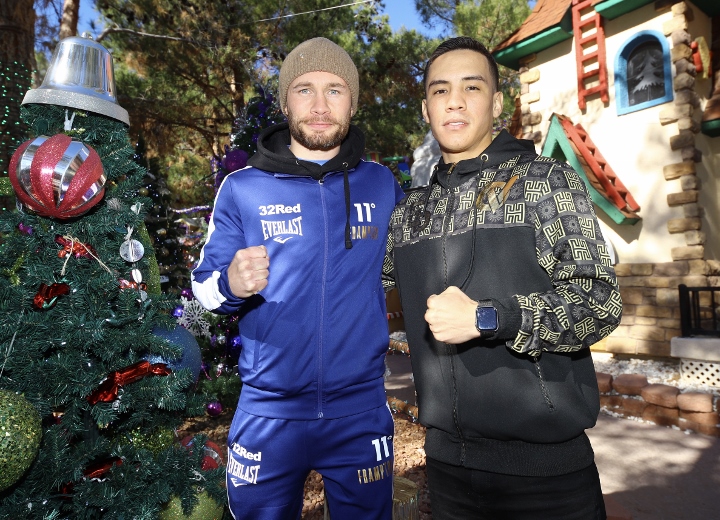 Northern Ireland’s Frampton (26-2, 15KOs) doesn’t quite go full throttle into the 130-pound division, as his scheduled 10-round contest versus Tyler McCreary (16-0-1, 7KOs) takes place at a contracted catchweight of 128 pounds. Frampton—a former junior featherweight and featherweight titlist—weighed an intentionally career heaviest 128 pounds for his first bout since a 12-round loss to unbeaten featherweight titlist Josh Warrington last December. Toledo, Oho’s McCreary checked in just below the contracted mark at 127.5 pounds.

Wins by Valdez and Frampton could place both in line for separate title shots in the first quarter of 2020. Valdez—a two-time Olympian for his native Mexico—is eyeing a showdown versus countryman and long-reigning titlist Miguel Berchelt (36-1, 32KOs). A victory by Frampton could set up a bid to become a three-division titlist as he is a top candidate to next face 130-pound titlist Jamel Herring (21-2, 10KOs).

Adames (18-0, 14KOs) weighed 153.5 pounds, while Teixeira tipped the scales at pounds 153.25 pounds. The winner could receive an upgrade without having to win another fight, as unbeaten titlist Jaime Munguia is considering a permanent move to middleweight as he tests the waters versus Gary ‘Spike’ O’Sullivan in January.

Looks a good fight Frampton that is

[QUOTE=Toffee;20219689]Incredible. Can't wait to hear Bob interviewed - he was disgusted on the stage![/QUOTE] "We're throwing him out of the hotel" [url]https://youtu.be/fLJSfqcFthE[/url]