Vito Mielnicki Jr. Confident His Abilities Are Growing Under Goossen

As Vito Mielnicki Jr. prepared for another day of 80+ degree temperatures in Southern California, it was important to remind him to never forget where he comes from.

It was 31 degrees, just below the freezing mark, in New York City, a few miles removed from his home in Roseland, New Jersey.

“It does get pretty chilly when I go on my morning run,” he laughs, knowing that no one back east will believe that statement. “Not cold to us, but it's chilly.”

The 18-year-old Mielnicki can be excused for his good fortune when it comes to the weather. It’s not the kid’s fault. We’ll just call it a perk of training with his new coach, Joe Goossen, out in Van Nuys. And after he faces Steven Pulluaim on the Errol Spence-Danny Garcia undercard in Arlington, Texas this Saturday, the soon-to-be frozen tundra of the Garden State awaits.

“It's not a permanent move; it's really just for my training,” he said of the alliance with Goossen. “After my fight on the 5th I'll go home for a few days and then come back to training and then go back for the holidays. I stay in shape year-round, but in between fights, I'll go home and see my family. And for training purposes, I'm out here with Joe.” 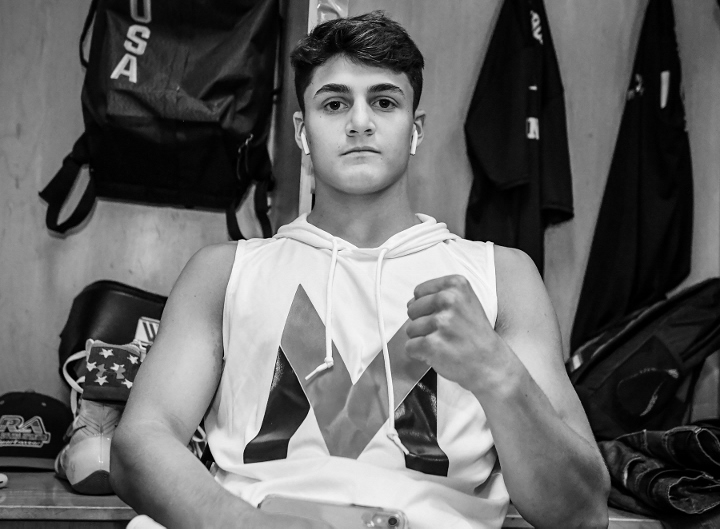 After a stellar amateur career and six pro wins, four of which have ended by knockout, it was clear that the Mielnicki machine was chugging along just fine, but when the opportunity to work with the renowned and respected Goossen came up, it was a no brainer for the teenager and his team.

“He's been to that next level and he's had so many world champions,” said Mielnicki of Goossen. “Joe knows what it takes to get there, and with my work ethic and my talent that I have already, adding Joe to my team, it's gonna make me even greater than what I could already be. I was doing great where I was at in Jersey and fighting the way I was, and we're not changing my style; we're just adding on to what I already have. Since I'm a boxer-puncher and a great counterpuncher, he's adding that inside game that I'm gonna need later in my career, where someone's just gonna keep pressuring me. He's improving that, he's improving my punching power and making me a better fighter overall.”

Arriving in California on September 8, Mielnicki has been a quick study in the Ten Goose Boxing Gym, where the education isn’t just in the ring with the gloves on, but in listening to Goossen’s stories of days gone past.

“I probably hear a new story with Joe every day in the gym, and anyone who knows Joe knows he can talk and tell stories all day,” said Mielnicki. “He tells me about all the camps that he's had, all the moments he's had in locker rooms, and stories he's had with greats like Diego Corrales, (Joel) Casamayor, Michael Nunn. I think it's cool and great knowing that the man in my corner has been to where I want to be, and that's a great addition to my team.”

Even though Mielnicki comes from a boxing family, hearing Goossen’s tales from the trenches adds a new dimension to the welterweight prospect’s book of learning in this toughest of sports. Add in that the Al Haymon / PBC fighter will be appearing on his third major card, following Wilder-Ortiz and Wilder-Fury 2, and he’s got a level of experience under his belt that few with six pro fights have. He knows it, and he appreciates it.

“I rise to the occasion wherever I am, but being in atmospheres like this early in my career is great experience for me so when I am the main event on a card, all this stuff is just normal to me,” he said. “That being said, my opponent not being in that atmosphere or having that experience, it's big, but I absorb it all like a sponge. I love those experiences and I'm gonna take it all in.”

Sounds like “White Magic” has it all under control at an age where most are still finding their way. So what about being an 18-year-old on his own in Los Angeles?

Not an issue, he says.

“A lot of people told me there's a lot of distractions and all that, but I already know what my purpose is coming out here, and I'm more focused than I've ever been in my career,” Mielnicki said. “There's not gonna be anything that can take me off my goal, which is to be a multiple-time world champion and to strive for greatness. I go out and enjoy the weather here, but everything I do is based on my career, and I wouldn't want it any other way.”

But all the racists say Haymon bid only for black fighters????!?

I wanna see more from Vito, and another youngster, Brandun Lee! I think Brandun should be done with SHOBOX, and move to some PBC events, just like Vito! PBC, make it happen!