BoxingScene.com has learned that Keith Thurman-Josesito Lopez, Leo Santa Cruz-Miguel Flores and Danny Garcia-Adrian Granados are among the FOX main events that’ll be revealed during a press conference Tuesday in Los Angeles.

Premier Boxing Champions/FOX main events through April are expected to be announced during that event. Al Haymon’s organization and FOX, a broadcast network available in roughly 120 million homes in the United States, announced a new partnership two months ago that will begin December 22 with a show that’ll feature twins Jermall Charlo and Jermell Charlo in respective defenses of their WBC interim middleweight title and WBC super welterweight crown.

The Thurman-Lopez fight will headline a January 26 card from Barclays Center in Brooklyn. A heavyweight bout between Brooklyn’s Adam Kownacki (18-0, 14 KOs) and Gerald Washington (19-2-1, 12 KOs), of Vellejo, California, also will be broadcast by FOX that night. 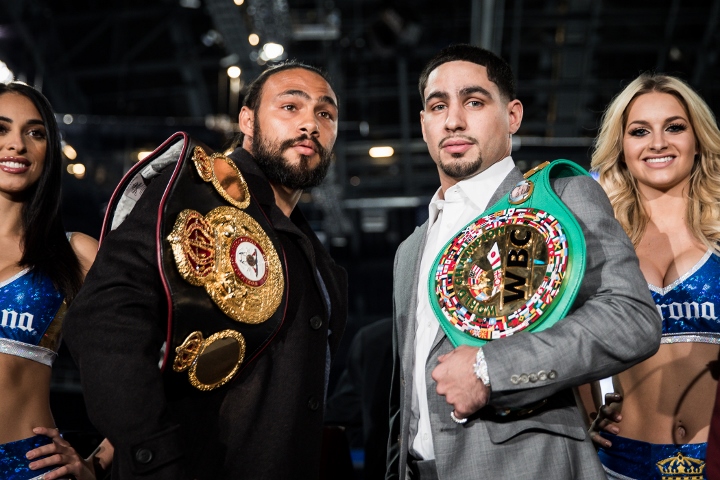 The 29-year-old Thurman (28-0, 22 KOs, 1 NC), of Clearwater, Florida, will fight for the first time since he defeated Garcia by split decision in March 2017 at Barclays Center. Thurman had elbow surgery in April 2017 and his return has since been delayed due to a hand injury.

The 34-year-old Lopez (36-7, 19 KOs), of Riverside, California, has won three straight fights since Andre Berto stopped him in the sixth round of their March 2015 bout in Ontario, California.

The Garcia-Granados fight will take place at some point in April.

As previously reported Tuesday by BoxingScene.com, a Porter-Yordenis Ugas fight also will be announced at the press conference Tuesday (https://www.boxingscene.com/report-shawn-porter-yordenis-ugas-set-march-9-las-vegas--133678).

What happen to Santa Cruz vs Russel? Who the hell is Flores a PBC bum. Come on Santa Cruz. Man Quigg would have been better.

Some of yall do nothing but complain . I'm for any boxing match as long as it conpetitive. It's on free T.V and each one of these fights have a chance to be competitive. .. Fox is goong to promote…

Yawn, another typical PBC snoozefest.. next