The latest development in the planned rematch between Andy Ruiz Jr. and Anthony Joshua has already caused a ripple effect.

Concerns remain at large even after Eddie Hearn, Joshua’s promoter officially announced a Dec. 7 date for the aforementioned clash, due to take place in Diriyah, Saudi Arabia. However long it takes to get sorted out could impact the timeline for when mandatory title defenses are ordered by the various sanctioning bodies.

Ruiz Jr. (33-1, 22KOs) collected a slew of heavyweight tiltes following his upset 7th round knockout of England’s Joshua (22-1, 21KOs) this past June at Madison Square Garden in New York City. Among the belts he collected was the International Boxing Federation (IBF) title, with whom Bulgaria’s Kubrat Pulev serves as the mandatory contender. 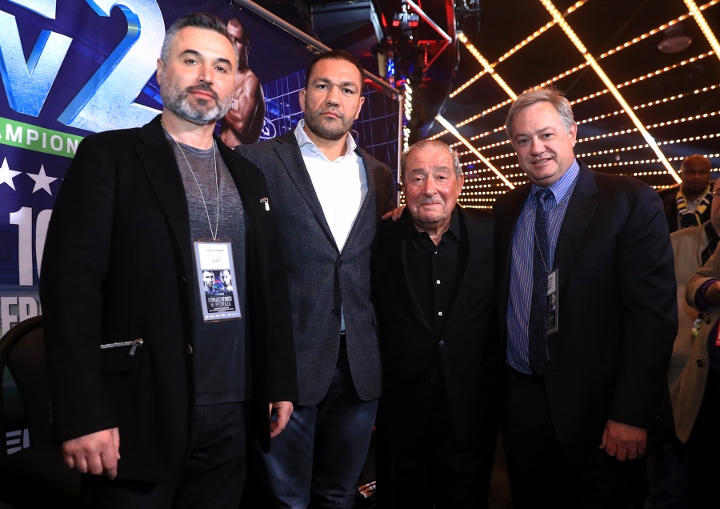 A press conference held Monday in London, England featured only Hearn and—for this event—business partner Omar Khalil, managing partner of little-known Skills Challenge Entertainment, whose credentials don’t even include a functional website. Neither boxer was present, an unusual development especially for a fight of this magnitude.

Ruiz Jr. remains reluctant to travel to Saudi Arabia, where the suggested venue has yet to advance beyond a drafted blueprint on an architect’s table. It’s understandable why a challenger waiting in the wings would question when his due shot will arrive.

“We are concerned about the continuing reports that (Ruiz) has not yet agreed to the rematch,” John Wirt, president of Epic Sports—Pulev’s primary promoter—told BoxingScene.com. “In all my years in boxing, I don’t ever recall seeing a press conference for a fight of this magnitude where the fighters were so conspicuously absent.

“The fact is that Joshua and his team forced Ruiz to agree to an immediate rematch clause in direct violation of IBF Rule 3B and it is unclear whether such clause is even enforceable by Matchroom.”

The vested interest on the part of Epic Sports stems from a ruling by the IBF on Monday, where—as BoxingScene.com previously reported—the sanctioning body approved a rematch between Ruiz Jr. and Joshua ahead of a mandatory title defense. Two conditions applied, however: the rematch must take place by no later than Dec. 7 (the targeted date), and the winner must provide written consent to face Pulev on or before May 31, 2020.

Any disruption in staging the rematch would clearly alter those plans.

“We also want a deadline by which the fighters must agree to the IBF’s conditions particularly since it appears this fight is not made, and we need to know what direction we are going since we are looking to have Pulev fight in November if the rematch goes forward for all the belts.”

Pulev (27-1, 14KOs) became the mandatory challenger following a 12-round win over Hughie Fury in their final eliminator last October. He accepted an interim fight while Joshua was planning his U.S. debut in a granted voluntary title defense, which was due to come versus Brooklyn’s Jarrell Miller before Ruiz stepped in on short notice.

While Joshua had his problems in the ring, the worst part of Pulev’s last fight came well after the final bell. The title challenger scored a 7th round knockout of Bogdan Dinu, in Costa Mesa, Calif. this past March, only to fall prey to the #MeToo movement in a post-fight interview that ended with his kissing an assigned reporter on the lips without her consent.

The matter made its way to the California State Athletic Commission in May, having already been placed on suspension by that point. His suspension was extended, as he was required to attend a seminar for sexual harassment offenders.

Having met all guidelines, Pulev’s suspension was lifted on July 22—at which point a venue still had not been selected for Ruiz-Joshua II. It provided the very window to attempt to enforce his mandatory ranking, only for Ruiz—through Premier Boxing Champions (PBC)-assigned promoter Tom Brown—to file for an exception in order to honor the contractually bound rematch clause exercised by Joshua.

Epic Sports filed an objection against the requested exception one week later, which forced the IBF to put the matter to a vote and ultimately siding with Ruiz.

As it seems that the defending champ isn’t in as much of a hurry to enter such a fight—at least not without his expressed consent—Pulev’s team wants answers on his next move.

“We plan on filing an appeal as a prophylactic measure to protect Pulev’s rights while these issues get sorted out,” informed Wirt. “I can say this though—Pulev would fight Ruiz in the U.S., in Mexico or even in Timbuktu and Joshua and his handlers are forgetting the most fundamental tenet of boxing that once you become champion everything changes.”

I'd love to see Ruiz fight another guy before AJ.

[QUOTE=OnePunch;19988376]manager of record or not, he could be sued for tortious interference of the rematch contract between Ruiz and Matchroom.....[/QUOTE] That would go nowhere. He hasn’t, as far as we know, told Ruiz not to fight AJ ... Ruiz has…

[QUOTE=MastaBlasta;19988465](Ignoring the childish nonsense at the beginning) ... Andy is not the first guy to hold out for a better deal after becoming champ. It was no doubt a manipulative, offensive contract in the first place. When you KO the…

[QUOTE=BigStomps;19988370]But I haven't heard Andy say Eddie is lying or denying he signed a contract.. . So that's all I'm saying. If he signed the contract then he should honor it. If he didn't sign a contract that gives Eddie…