Takam gave Joshua a real tough test in the fall of 2017, before he was stopped in what many felt was too early during an exchange in the tenth round.

Now Takam is being lined up for a planned fight with Oleksandr Usyk, who unified the entire cruiserweight division in 2018 and now heads up to heavyweight. 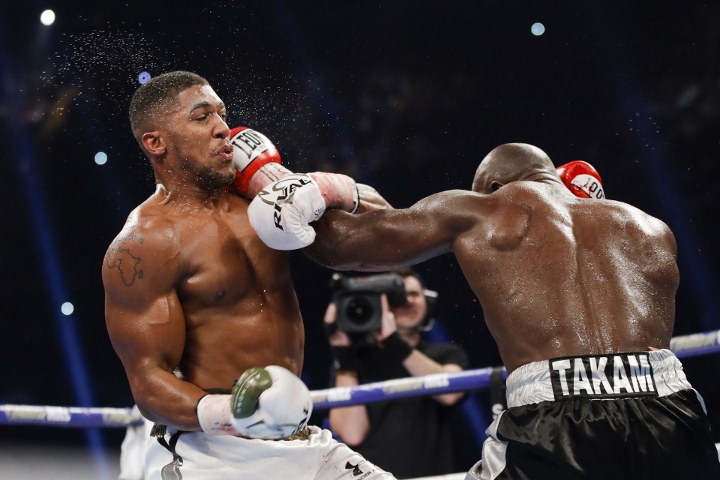 Takam and Usyk were going to collide back in May. But Usyk suffered a bicep injury in training and was forced to withdraw.

"I was disappointed because it was only two weeks before the fight they told me," said Takam to Sky Sports. "I wish him a good recovery because I'm ready.

Back in December, Takam handed Senad Gashi his first defeat after suffering back to back stoppage losses to Derek Chisora and Joshua.

He was not surprised that Joshua was shocked last month by huge underdog Andy Ruiz.

"I am not shocked because in the heavyweight division anything can happen. You can take one punch and it's finished. Watch my fight with Derek (Chisora) I was good, I was winning my fight, I take one punch and I go out," Takam said.

"I'm not shocked Joshua lost the fight and I wish he's going to come back strong again to win the rematch. I would like my rematch with Anthony Joshua. I still have a dream. I still have motivation to box and to be champion. Now is the time. I can fight everyone, (Deontay) Wilder or Tyson Fury I don't care, I ready to fight anyone."

[QUOTE=Jkp;19880278]Probably because AJ is an arrogant, fake champ, racist, steroid taker, who cant box.[/QUOTE] But that makes no sense as to why Fury fans would hate him - sounds like they are two peas in a pod

[QUOTE=FerronK;19877034]Yes, he had been taking **** about Joshua. Also I am talking in generality.[/QUOTE] Once again you didn't even read his statements. You just assumed he was going to say something negative. He didn't. Read the article before posting.

[QUOTE=Roberto Vasquez;19878380]I'm British. And I can tell you just from this forum that a lot of British fans who support Fury wanted to see Joshua lose and vice versa. I don't get why you wouldn't generally support your countrymen? If…

[QUOTE=Jkp;19876978]Anyone find it odd takam was cut by Joshua so badly. Then in the next fight against parker , AJ was caught tampering with his gloves pre fight.[/QUOTE] [url=https://postimages.org/][img]https://i.postimg.cc/13FxY3pb/AJ-elbow-meme-OF-COURSE-ITS-LEGAL.jpg[/img][/url][url=https://gasstation-nearme.com/][/url]