Twenty years later, Showtime’s ShoBox: The Next Generation series continues to stay true to its roots.

The premium cable outlet will enter the 20th anniversary year of its groundbreaking prospect series with a strong quadrupleheader taking place January 20, live on Showtime from Mohegan Sun Arena in Uncasville, Connecticut. Headlining the card, Patrick Cora and Hurshidbek Normatov meet in a scheduled 10-round junior middleweight contest.

The eight prospects on the show—who boast a combined record of 93-1-3 (45KOs) are represented by five different promoters: Sampson Boxing, DiBella Entertainment, Paco Boxing, Kings Promotions and Salita Promotions. Both statistics are directly in line with another staple of the long-running series which—in addition to having produced more than 80 major titlists—has long sought out the best rising talent, regardless of politics.

“We are excited to ring in the new year with a ShoBox event that brings together five promoters and features eight fighters with only one loss amongst them,” said Gordon Hall, executive producer for ShoBox, which debuted in July 2001. “Each fight presents prospects in both corners in their toughest tests to date with all looking to continue their quest to turn from prospect to contender.

“Our 2021 kickoff event speaks to Showtime’s commitment to work with all promoters and managers to develop the stars of tomorrow.”

The four-fight card will mark just the second ShoBox telecast since the pandemic, though entering the new year with a bang. The event will mark the first Showtime card of 2021, with both sides of the main event making their respective series debut.

San Juan’s Cora (10-0, 7KOs) was unable to get in a fight in 2020, largely due to the lack of activity in his native Puerto Rico. The 21-year old former national amateur champion last appeared in December 2019, scoring a 4th round knockout of then-unbeaten Geronimo Sacco.

The upcoming clash with Normatov will mark the third straight fight against an undefeated opponent for Cora, along with his first fight stateside. The 13 months spent between fights will be well worth the wait given the upcoming opportunity and the preparation he’s enjoyed along the way.

“Fighting on Showtime is a dream come true and being put in the main event is just beyond words,” said Cora, who gained extensive work with then-unified 154-pound titlist Jeison Rosario and Top 10 contender Erickson Lubin despite an inactive 2020 campaign. “At the end of the night, I will prove I belong there with the best of the best. There are no excuses. I am ready for war and to win for Puerto Rico.

“My opponent had a great amateur career and he's talented. It will be a great experience for sure, but I have worked hard for these types of fights; the hand they will raise at the end of the fight will be mine.”

Normatov (10-0, 3KOs) was only slightly more active over the past year than was his upcoming opponent. The 28-year old southpaw from Brooklyn by way of Andijan, Uzbekistan managed to get in one fight in 2020, an eight-round win over Uriel Hernandez this past January in Toronto, Canada. While this bout represents a step up in class, being surrounded by world class talent—including former titlists Daniel Jacobs and Richard Commey along with perennial contender Sergiy Derevyanchenko—has him believing that a win is the next career step towards putting a 154-pound title around his waist.

“I hope this fight will be a key one on the way to a world championship,” said Normatov. “I am happy to be fighting on ShoBox as more than 80 ShoBox fighters have become world champions.” 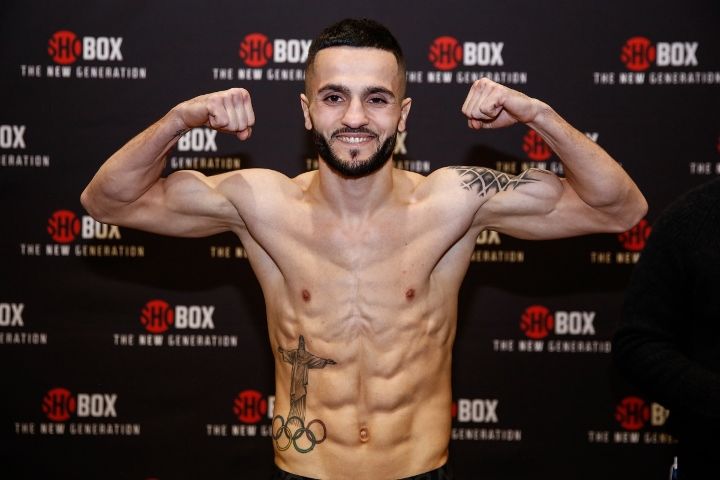 Rounding out the show, Martino Jules (10-0, 2KOs) and Pedro Márquez Medina (12-1, 8KOs) both debut on ShoBox in their eight-round featherweight battle.

Avagyan debuted on ShoBox this past March, as part of the last U.S.-based show prior to the ongoing coronavirus pandemic. The unbeaten featherweight—who represented Armenia in the 2016 Rio Olympics—overcame two knockdowns to manage an eight-round majority decision over unbeaten Dagoberto Aguero.

The upcoming clash with Nuñez will mark the fifth undefeated opponent in Avagyan’s past six starts.

“For every fighter, being able to show their skills, character, heart and fighting spirit on Showtime is a goal, a dream and a great honor,” said Avagyan. “I want to convey to the fans that this will be a spectacular battle. I am hungry. I want to get in the ring and fight like a warrior.”

Nuñez not only fights on Showtime for the first time, but also making his North American debut.

“I am incredibly happy to be able to fight outside my country, with an opponent that will demand my best,” said Nuñez, a 22-year old southpaw who is coming off of an eight-round win this past February. “Nevertheless, I have no doubt of my preparations and I have faith that I will be victorious.

“A victory will open many doors for me in the United States.”

Colombia’s Solano returns to the U.S. and the ShoBox circuit for the first time since his last start, an eight-round win over Elias Damian Araujo in June 2019.

“I am excited to be back on ShoBox,” said Solano. “Training this time has been a bit different, due to the pandemic, however, we are training very hard and preparing for a battle. I know my opponent will do the same, so expect a war.”

There is no question that his opponent will be down for the cause. Williams has emerged as one of the sport’s most promising young talents, with his nationally televised debut coming in his home state.

“I’m excited about this fight and am looking forward to showcasing my skills on a major platform like ShoBox,” said Williams, a 22-year old from East Hartford. “I’m expecting Solano to be in great shape, but I will be ready.”

Allentown’s Jules ventured out of his home region for his last fight, producing arguably his most notable win to date. The 23-year old southpaw outlasted Aleem Jumakhonov in an eight-round decision this past July live on ESPN+ from The Bubble at MGM Grand in Las Vegas.

Now comes another stiff challenge in a coin-flip affair.

“I’m very excited to showcase my talent on Showtime,” said Jules. “My opponent is world ranked by WBO so I’m expecting a tough fight. I view this fight as a step up which is all I want at this point in my career but it’s also a fight where I can learn what I have to strengthen for myself and also in my future training camps. I have no doubt that I will win this fight, I’m only focused on coming to fight night as the best version of myself.”

San Juan’s Márquez Medina will fight on Showtime and stateside for the first time in his young career. The 26-year old knockout artist steps up in class but carries a three-fight knockout streak into the fight.

“I’m very grateful for the opportunity to fight on Showtime and in the United States for the first time,” said Márquez Medina, who last fought in a 3rd round knockout of Juan Carlos Peña this past January. “My job is to train hard and meet the demands of my trainer Ricky Márquez.

“My opponent is good; he has solid boxing skills and throws a lot of punches, but I have no doubt that after this fight, many more opportunities will arise for me.”