Whyte saw action earlier this month in Saudi Arabia, where he picked up a unanimous decision win over Mariusz Wach.

In a recent interview, Whyte explained that he plans to fight again in March or April - with several names being mentioned as possible opponents - including Wallin. 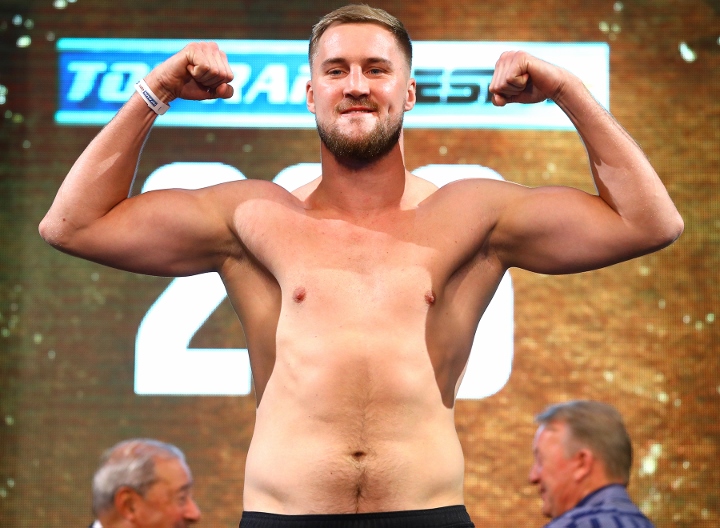 Wallin is coming off a very unexpected performance.

He went the full twelve round distance with unbeaten Tyson Fury back in September in Las Vegas.

During the fight, he landed a solid shot that opened up a very serious cut above Fury's right eye. There were some very tense moments, as Fury's corner feared the contest could get stopped - which in turn would have given Wallin a TKO win. The fight was allowed to continue and Fury won a unanimous decision.

A win over Whyte, who is in line for a world title shot, is certainly an opportunity of interest to Salita.

"Otto is one of the best heavyweights in the world. His goal is to beat the best in the division and win a world title. A fight with Whyte for the WBC 'interim' title could be an interesting possibility in 2020," Salita told Sky Sports.

While Whyte is in line to fight Wilder, he doubts the fight will ever take place. Wilder will face Fury in a rematch on February 22, at the MGM Grand in Las Vegas.

"I'm not confident of anything to do with Deontay Wilder anymore," Whyte told Sky Sports earlier this month. "The WBC want me to fight, I want the fight, I'm mandatory, but Deontay Wilder don't want to fight.

"What more can I do? I can't do any more. Deontay Wilder is a coward. He's a proper coward."

[QUOTE=PBR Streetgang;20294686]Based on what? I realize you are probably speaking in hyperbole but I don't get the hate towards Wallin. He's not the 2nd coming of George Foreman but he his only loss was a competitive affair with Fury. Certainly…

[QUOTE=Roberto Vasquez;20296012]Whyte has a similar record to Wilder. And it's a lot better than Fury's. It's also 400% better than Ortiz's. Who is a 'monster' apparently[/QUOTE] No he doesn't. Whytes only decent win is against parker via illegal head butt.…

[QUOTE=Jkp;20294274]Whyte gets beat by any one in the top 10. That's why he turned down title shots against AJ, multiple mandatory eliminators, parker rematch. And fights nobodies like wach, Rivas, wallin instead.[/QUOTE] Whyte has a similar record to Wilder. And…

[QUOTE=Jkp;20294923]That just proves u know nothing about boxing.[/QUOTE] Listen honey, you either have a bias or you're completely ignorant to the sport. You stated Wallin is an "F"" grade fighter. You never answered my question, what is Zumbano? What is…

Whyte/Wallin wouldn't be a bad fight. I'd guess Whyte would likely wear down Wallin for a UD or late KO. I think if Fury hadn't had the bad injury he would've stopped Wallin late. But IMO there are several other…