Oscar Valdez appears to have an opponent for his already planned fight date.

The former featherweight titlist from Sonora, Mexico—now campaigning at 130-pounds—is due to headline the July 21 edition of Top Rank Boxing on an ESPN platform live without fans in attendance from the MGM Grand Conference Center in Las Vegas. Sources with intimate knowledge of the situation have informed BoxingScene.com that Puerto Rico’s Jayson Velez has emerged as the frontrunner to land the assignment.

News of the development was first reported by ESPN Deportes’ Salvador ‘Chava’ Rodriguez.

Valdez (27-0, 21KOs) will make his second appearance as a junior lightweight, having moved up in weight after making six successful defenses of a title reign extending back to July 2016. A major scare came with his first fight at a new weight, surviving an early knockdown and a heroic effort from Adam ‘Blunose’ Lopez to score a 7th round stoppage in their back-and-forth war last November at The Cosmopolitan in Las Vegas. 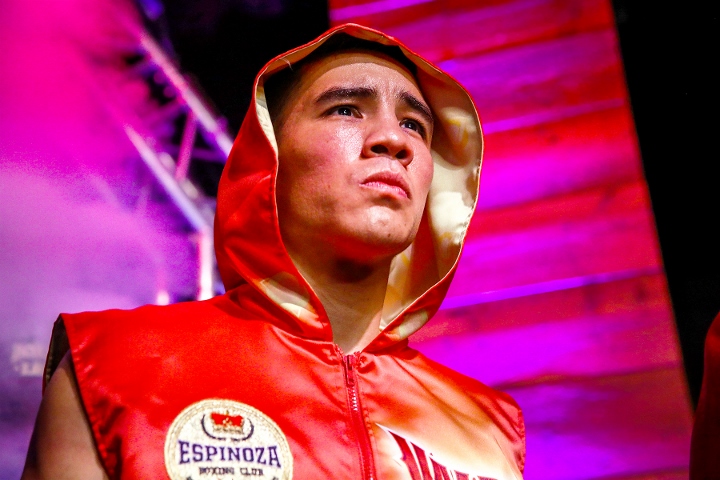 Lopez took the fight on less than 24 hours’ notice, entering as a late sub for Andres Gutierrez who miserably missed weight for their ESPN+ headliner. Valdez struggled early to adapt, rising from the canvas to pull ahead on two of the three scorecards at the time of the stoppage.

The win put Valdez—who trains with Eddy Reynoso and is managed by in position to next challenge reigning World Boxing Council (WBC) 130-pound titlist Miguel Berchelt (37-1, 33KOs), who is co-promoted by Zanfer Promotions and Top Rank (whom promotes Valdez). Plans were in place for a potential springtime clash until the boxing schedule was decimated by the ongoing coronavirus disease (COVID-19) pandemic.

As the bout is identified by Top Rank as one where the preference is to have fans in attendance—a luxury that is not afforded any entity in North America at the present time—the decision was made to allow both to enter separate stay busy fights. Berchelt continues to await his marching orders, with rumors of a June 27 appearance at a crowdless venue in Mexico City likely more optimistic than realistic at this time.

Meanwhile, Valdez will move forward with his first of 2020.

Velez (29-6-1, 22KOs) will enter such a fight on the heels of a loss, albeit in a strong showing versus rising prospect Jaime Arboleda this past February in Allentown, Pennsylvania. A late round knockdown scored by Velez proved too little, too late in dropping a tightly contested 12-round split decision in their Showtime-televised crossroads bout.

The loss snapped a three-fight win streak for the 32-year old Boricua, who has faced stellar competition over the course of his 13-year career.

Unfortunately, it has rarely resulted in his hand being raised. Velez fought to a disputed 12-round draw with then-unbeaten Evgeny Gradovich in a November 2014 title challenge, shortly followed by a rough patch where he dropped five of his next eight starts. Of his conquerors, two—Joseph Diaz and Rene Alvarado—are current 130-poudn titlists, while Ronny Rios and Ryan Garcia are both ranked contenders at junior featherweight and lightweight, respectively.

[QUOTE=mlac;20613670]My boy Oscar has regressed ever since joining the reynosoes, maybe he needs some canelo beef? Either way Valdez via huge left hook from hell.[/QUOTE] He got his jaw broken thanks to Manny Robles' face first style. Theres a reason…

[QUOTE=mlac;20613746][IMG]https://pbs.twimg.com/media/DYAOgOoW0AAfKuT.jpg[/IMG][/QUOTE] His last fight. Father time is undefeated. Show a picture of Vadez after Quigg got through with him.

[QUOTE=Corelone;20613722]Like Scott Quigg didn't have anything to do with it. Scott left a trail of wrecks behind him and Oscar gave him advantages. That was a bad mistake.[/QUOTE] [IMG]https://pbs.twimg.com/media/DYAOgOoW0AAfKuT.jpg[/IMG]

[QUOTE=mlac;20613670]My boy Oscar has regressed ever since joining the reynosoes, maybe he needs some canelo beef? Either way Valdez via huge left hook from hell.[/QUOTE] Like Scott Quigg didn't have anything to do with it. Scott left a trail of…

I like this match up and is decent and one the best from Top Rank Pandemic Era for now. Jayson is going to test Oscar Valdez and his teachings under Eddy Reynoso. :boxing: