Ramirez (23-2-3, 10 KOs) is a 27-year-old, highly skilled southpaw with fast hands and super defense. He was last seen stopping formerly undefeated Cuban Leduan Barthelemy in four impressive rounds last November in Las Vegas. The pair had previously fought to a controversial draw, but this time Ramirez left no doubt. 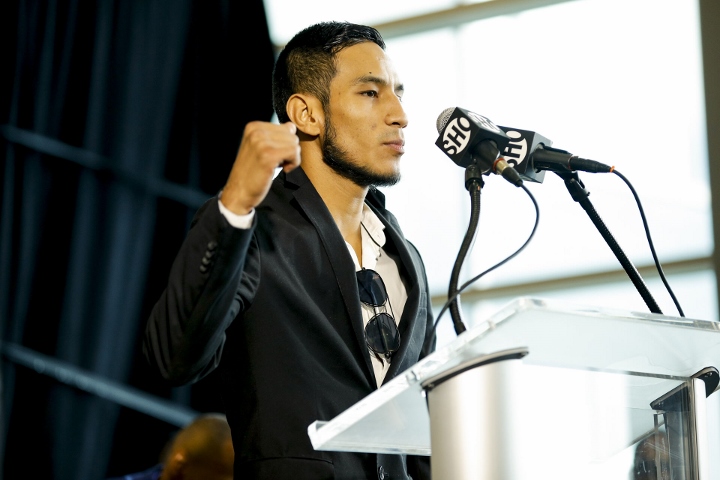 Cota (30-4, 27 KOs) is a 27-year-old perennial contender with powerful fists and a hard-nosed relentless free-swinging style. Cota was last seen at the Liacouras Center in Philadelphia where he scored a TKO 5 over popular contender Thomas LaManna on the undercard of promotional stablemate Jeison Rosario’s title-winning stoppage of Julian Williams in January of this year.

Both fighters are trained by Pedro and Eduardo Montiel and managed by Manuel Montiel Jr., brothers of five-time world champion Fernando Montiel.

“I have been given many good opportunities in my career and look forward to many more with Sampson Boxing,” said Ramirez. “Sampson told me if I work hard and do my job, he will get me in the right fights and we have both kept our word.”

Lewkowicz says he’s happy to be continuing his promotional relationship with both Mexican warriors.

“Both of these fighters are from the toughest parts of Mexico and they work everyday for more for themselves and their families. I am honored to remain part of their team and helping them fight their way to better lives. They are both good men who always show up to fight. They are both coming off big victories in their careers and when boxing starts up again, they will both see good opportunities to come.”

MTK Global is thrilled to announce the signing of highly-rated Kazakh star Talgat Shaiken as he turns professional.

The 19-year-old has already had an incredible amateur career, earning a silver medal in the Youth Olympics whilst also becoming a Youth Asian Champion, and he's ready to now enter the paid ranks alongside MTK Global.

Shaiken said: "I am really pleased to be signing with MTK Global. They are the best management company in the world and I am very excited for the future.

"I am looking forward to making my professional debut really soon and becoming the latest proud fighter from Kazakhstan to go on and win titles."

He is the latest sensation from Kazakhstan to sign with MTK Global, following in the footsteps of elite fighters such as Zhankosh Turarov, Sultan Zaurbek, Nurtas Azhbenov and more.

News on when Shaiken will make his professional debut will be announced in due course.

Former junior middleweight champion ‘King’ Carlos Molina is bringing back live boxing in the age of the pandemic with an exciting no-spectator event this Saturday June 6, 2020, in Mexico that will be shown live on the FIGHT NIGHT LIVE and KING CARLOS PROMOTIONS Facebook pages (9pm ET/6pm PT) for just $5.

In the opening bout, Uruapan, Michoacán, Mexico’s Cristián Martín Medina García will make his four-round featherweight debut against an opponent to be announced.

I love these multi-news article, they put the updates of various boxers and announcement of boxing cards without the bulls[I]hi[/I]t. :boxing: