For all its flaws in execution and managing the calendar, the World Boxing Super Series has been one of the genuine highlights of boxing the last couple years in the ring. Callum Smith and Oleksandr Usyk announced their arrivals in 2018. In 2019, it’s meant two Fight of the Year contenders.

This is a year with more than it’s fair share of those all over the place.

Thursday morning in Japan, a front-runner might have emerged. Throw in a round of the year nominee or two as well. 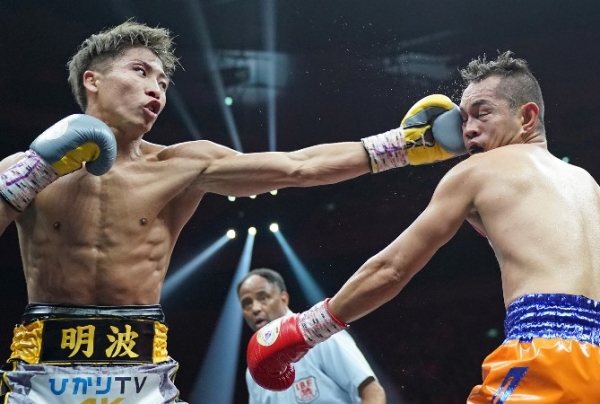 A pair of devastating punchers, one rising and one close to riding into the sunset, played gunslinger for twelve fascinating rounds. By the end, the expected winner had his hand raised but the road there was a journey worth taking no matter how early it meant waking up.

Heading into the fight, the questions left about Japan’s Naoya Inoue at least seemed capable of being asked. For all the “Monster” can dish out, could he take it? What would happen when adversity came knocking?

After all, it always does.

Nonito Donaire asked those questions and answered any lingering doubts about where he belongs when he finally hangs up the gloves. It was the sort of stand that brought to mind nights like Erik Morales-Marcos Maidana and Geroge Foreman-Evander Holyfield. Donaire worked his way down the scale and through the WBSS field, returning to what was likely always his best weight class. Donaire came to win and left everything he had in the ring.

He cut Inoue. He bloodied his nose. Against arguably the best finisher in boxing, Donaire survived a brutal fifth round, had Inoue on his heels in round eight, and hurt him badly in round nine. Ultimately, Donaire forced Inoue to dig deep and find even more than perhaps even Inoue knew he had.

Inoue responded to the ninth by hammering Donaire in the tenth and nearly stopping him in the eleventh after a brutal shot to the body. The referee may have given Donaire a precious few seconds there, and a charitable count, but Donaire was the one who found it in himself to rise and kept coming. To the final bell, he tried to win and in his own way he did.

Donaire won the memories of everyone who watched, an exclamation point on an outstanding career. Inoue won new knowledge of himself, left the ring with two of the four major titles in the class, and a ready passport for a return to the US in the Top Rank fold next year.

The Future for Inoue: The substance beneath the sizzle for Inoue should be an exciting prospect for fans. Still only 26, the Ring, WBA, and IBF titlist Inoue has finally had the sort of trial by fire that can forge a great talent into a great fighter. What will his relationship with Top Rank mean? Will Inoue be allowed to finish his business at bantamweight or will the pressure mount quickly to play games with the scale? Let’s hope it’s the former. Inoue isn’t a huge bantamweight by any stretch and was smaller looking than a Donaire who fought at featherweight and Jr. featherweight for most of the eight years. Inoue should move up to his fourth competitive weight class (he skipped flyweight) when his body demands it or he runs out of interesting things to do.

Bantamweight has plenty to keep him occupied.

Undefeated WBC titlist Nordine Oubaali was sharp on the undercard defeating his brother Takuma and a unification bout between the two would be a hot way to start the next phase of Inoue’s career. It would also set the stage for a potential mandatory with Mexico’s Luis Nery, one of the best fights on paper in all of boxing. The WBO belt still resides with Zolani Tete who has a mandatory against Johnriel Casimero coming. The winner of that fight would also be an appealing clash. If Juan Francisco Estrada could be lured up the scale, we’d have a clash of consensus pound-for-pound types to get excited about.

Inoue can take a lesson from Donaire. Economics might force Inoue’s hand but he’s where he should be on the scale right now. The “Filipino Flash” was at his most devastating during a short pass through 118 lbs. He will be remembered for a great career but could Donaire have etched a deeper mark in the class? What if he’d stuck around and seen fighters like Anselmo Moreno, Abner Mares, and Shinsuke Yamanaka? Could Donaire have been remembered in the same air as men like Ruben Olivares and Carlos Zarate? The path he chose wasn’t the wrong one; it’s just enough to wonder what might have been on a different route. Inoue might have enough depth in the field to put together a run that puts him in the rare air at bantamweight and still have time to chase Jr. featherweights and featherweights before his prime is done. It’s going to take a lot of man to beat Inoue and the best is likely yet to come against a fighter already in the running for the mythical mantle of best fighter in the world.

The Future for Donaire: It took a lot of man to beat Donaire on Thursday. Donaire could call it a day and not find a much better ending than this. His future can be summed up in one word: Canastota. There was a bit of a debate on social media this week about whether Donaire belong in the Hall of Fame. It was pretty silly. He lost his share but all were to top talent in his fourth and fifth weight classes and he beat his share there too. There was a moment where some wondered if Donaire could be better than Manny Pacquiao. He couldn’t but that’s a high bar. Even greatness comes in degrees. Only the second man to even win major titles at flyweight and featherweight (after Pacquiao who was lineal in both), Donaire was partially unified in two classes and achieved plenty of greatness all his own. He added to it Thursday against Inoue in what might have been the Fight of the Year and will be recalled fondly a lot longer than that. Donaire was a class act, and a tough out, to the end.

[QUOTE=hugh grant;20177991]We learnt nothing from naoya koing everyone. In this fight we can see naoya isn't that bad at all as we know donaires credentials and quality. But not as good as been suggested.[/QUOTE] both owned! can't argue with that.

Inoue should be ranked above Canelo in all pound-for-pound rankings.

[QUOTE=belerof;20178337]keep your own phobias in check[/QUOTE] It's not a phobia you catamite troglodyte, it's a fact. You can add to that the threat that the U.S intelligence service delivered to Japanese officials: Ally with us against China, or we will…

I can still hear Donaire's name from the memories of when Vic Darchiniyian was terrorizing the smaller weight classes more than ten years ago. The fact that he is still fighting in major bouts with the miles on him is…