The biggest fight of Sean Monaghan’s boxing career was over before he even knew what hit him.

Marcus Browne, a regular sparring partner and friend, drilled Monaghan with a straight left hand that dropped him just 39 seconds into their nationally televised fight in July 2017. Monaghan managed to make it out of that disastrous first round, but Browne hurt him badly with a right hook only 30 seconds into the following round.

Their scheduled 10-rounder, the fight Monaghan had hoped would legitimize him as a light heavyweight contender, was stopped just 40 seconds into the second round. Monaghan has another opportunity to get back into championship contention Saturday night, when the Long Island-based boxer will encounter Cuba’s Sullivan Barrera in a 10-round main event at Aviator Sports & Events Center in Brooklyn. 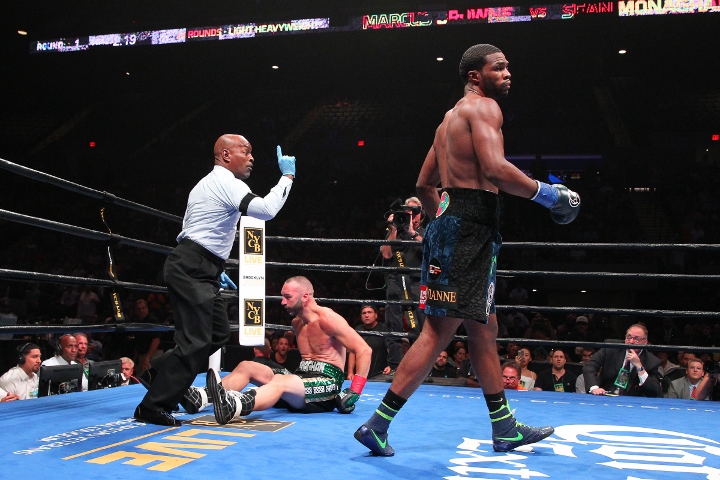 “I’ve definitely got a chip on my shoulder,” Monaghan said during a conference call recently. “I was embarrassed by that loss. Maybe my head got a little too big for myself. I didn’t really even think [that type of knockout] was possible. I’ve never been down in my life – in the ring or even in sparring. I got put down with a shot and was kind of dazed.

“I learned a big lesson. I’ll never put myself in that position again. I’ll gather myself up and keep on fighting. I’ve seen Barrera do it many times. It was just a bad experience, but it’s probably better to have that experience going into a fight with Barrera than never having that experience before. I’m more seasoned and I took what I can from that, and I moved on.”

Monaghan might’ve moved on, but he hasn’t forgotten the invaluable lessons he learned when the bigger, stronger Browne overwhelmed him.

“With the loss to Marcus, it’s gonna actually end up helping me in the long run,” Monaghan said. “I took a learning lesson from that. I walked into the ring half asleep. I’ve been known to kind of be too calm before fights. I calm myself down in the locker room. I walked into that fight half asleep and the next thing, it was over.”

The 36-year-old Barrera (21-2, 14 KOs) has more losses than the 37-year-old Monaghan (29-1, 17 KOs), but two elite, undefeated light heavyweights beat him (Andre Ward, Dmitry Bivol). Miami’s Barrera will fight for the first time since Bivol stopped him in the 12th round March 3 in The Theater at Madison Square Garden.

“I know how dangerous Barrera is,” Monaghan said, “and I know I’ll be switched on as soon as the opening bell rings.”

[QUOTE=sidefx996;19237576]J[B]ust met Sullivan this past weekend.[/B] What a nice kid! Hope he gets a convincing win and gets another title shot.[/QUOTE] did you meet him at the airport by any chance?

Just met Sullivan this past weekend. What a nice kid! Hope he gets a convincing win and gets another title shot.

Barrera's going to be no easier for him. Let's face it, Monaghan kind of sucks and only ever made it onto TV because he has a big fanbase willing to cheer him on while he knocks cans over. I say…

A quick KO is easy to write off. Its the long beatings that ruin fighters. Barrera is a methodical guy, I'm sure he'll take his time.