Showtime’s broadcast of Abner Mares versus Jesus Cuellar peaked at 377,000 viewers on Saturday night and averaged 327,000, according to statistics released Tuesday by Nielsen Media Research.

Much of Mares’ win against Cuellar competed directly with HBO’s telecast of the Terence Crawford-John Molina Jr. main event, which peaked at 871,000 viewers and averaged 806,000. Mares-Cuellar was more competitive than Crawford-Molina, but going head-to-head with HBO’s broadcast at least was partially responsible for lower viewership of the Showtime main event than some industry insiders expected. 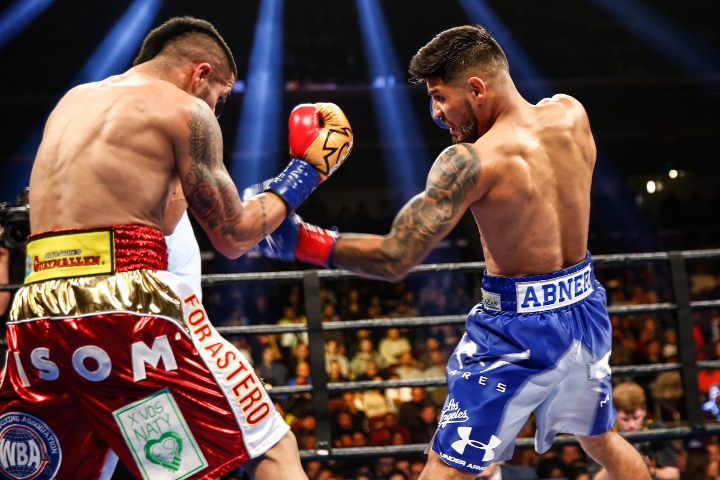 Houston’s Charlo (25-0, 19 KOs) floored Philadelphia’s Williams (22-1-1, 14 KOs, 1 NC) three times, including twice in the fifth round, before their scheduled 12-round fight for Charlo’s IBF junior middleweight title was stopped.

Earlier Saturday, however, Showtime’s live airing of Joshua-Molina from Manchester, England, attracted a peak audience of 390,000, making it the most-watched of the three fights Showtime televised Saturday. An average of 368,000 viewers tuned in to see the live version of England’s Joshua (18-0, 18 KOs) overwhelming Molina (25-4, 19 KOs), of Weslaco, Texas.

The 390,000 peak viewership for Joshua-Molina on SHO BOXING INTERNATIONAL is the biggest audience to date for that platform. The card headlined by the Joshua-Molina match was televised via pay-per-view by Sky Sports Box Office in the United Kingdom.

these ratings are a joke!!!

**** Numbers for a excellent Card while Crawford showed even up against a much better card than he is becoming a great Draw not only in Omaha but also ratings wise. I don't even have Showtime that network is Useless…

[QUOTE=PACnPBFsuck;17276915]Like anything else in life, consistency is the key, while HBO is putting fights weekly, Showbox haven't done anything in months, they're basically gonna have to get ball rolling now, cause HBO has NOTHING scheduled till the Cotto/Kirkland and that's…

[QUOTE=bigdunny1;17276856]real talk. can't use the subscribers excuse. Just 2-3 years ago Showtime were getting close to 1m viewers and drawing neck and neck with HBO Boxing. Now 2016 and no dramatic shift in the gap between HBO subscribers and Showtime…

[QUOTE=kiaba360;17276876]Garcia-Thurman is the only one that will do well (it SHOULD do well). Frampton/LSC might do well since Vargas/Berchelt aren't big names. If HBO manages to do better than SHO on Jan.28th, I'll be surprised.[/QUOTE] Like anything else in life,…