Joshua on Quit Claims: Everyone is Entitled To Their Opinion

Heavyweight contender Anthony Joshua has brushed away the claims that he quit in the seventh round of his TKO defeat at the hands of Andy Ruiz, which took place back in June at Madison Square Garden in New York City.

Joshua went down four times in the bout, with two of those knockdowns taking place in the seventh.

The referee waved it off, because he felt Joshua was not mentally ready to continue and he didn't like his physical mannerisms after rising from the fourth knockdown and walking to a corner. 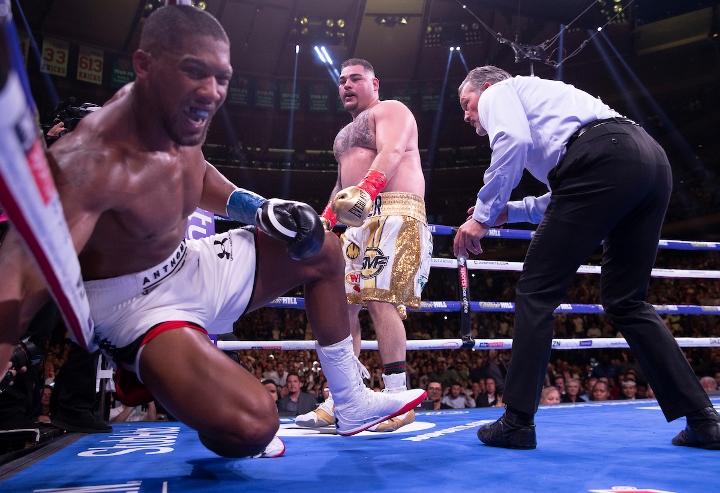 Joshua explained that he was ready to continue fighting and was never asking for the fight to be stopped.

“Everyone is entitled to their opinion. They all have their views. The thing is, I was on my feet, I tried to walk out and the ref held my trousers. He waved the fight off. It wasn’t like I said, ‘Ref, I’ve had enough.’ I didn’t quit. But that’s why we are here so we can face off again on December 7th,” Joshua said.

Joshua looks slimmer for the second fight, but says his physical appearance was not the focus of training camp.

“Your mind is the biggest muscle in the body. I just use that to my advantage. Positive self-talk is important. You have to really believe it in your heart, not just your mind.”

The British star also rejected rumors that he's been struggling in sparring and denied other whispers that he battered boxers in the gym and sent them home.

“I respect all my sparring partners who have helped get me ready physically. Some of them are here today, They all make me better and I respect that. I didn’t send any of them home," Joshua said.

Joshua didn't even look disappointed when the flight was called off. He may not have said "I quit" but he certainly didn't make it clear that he wanted to keep going.

[QUOTE=Ake-Dawg;20226074]I wish he would just say, I didn't handle the adversity well or I was concussed....and don't remember what I was thinking in the moment. Seems to me he is more concerned with his image than what happened in the…

That picture is hilarious they did my mans dirty

I don't know who's a bigger fraud- AJ or Canelo? I'm leaning towards Canelo since he's been at it longer. But AJ built a pretty good facade as well.

Really not sure what "quit" actually means. Some felt Brook quit after fracturing his orbital bone because he chose not to continue. Boxing is such a brutal sport and people have lost their lives in the ring, while others have…