Joshua Much Lighter, Ruiz Much Heavier For Rematch

A noticeably lighter Anthony Joshua indeed weighed in at 10-plus pounds less Friday for his rematch against Andy Ruiz Jr. than he did for their first fight. England’s Joshua officially came in at 237½ pounds for their second bout, set for Saturday night in Diriyah, Saudi Arabia.

The 6-feet-6 Joshua weighed 247¾ pounds the day before Ruiz upset him by seventh-round technical knockout June 1 at Madison Square Garden in New York.

The 6-feet-2 Ruiz officially weighed in at a whopping 283½ pounds Friday, 15½ pounds more than he was when he weighed in for their initial encounter six months ago. Ruiz weighed 268 pounds for their first fight.

This was the most Ruiz has weighed since he came in at 292½ pounds for his second pro fight in June 2009. 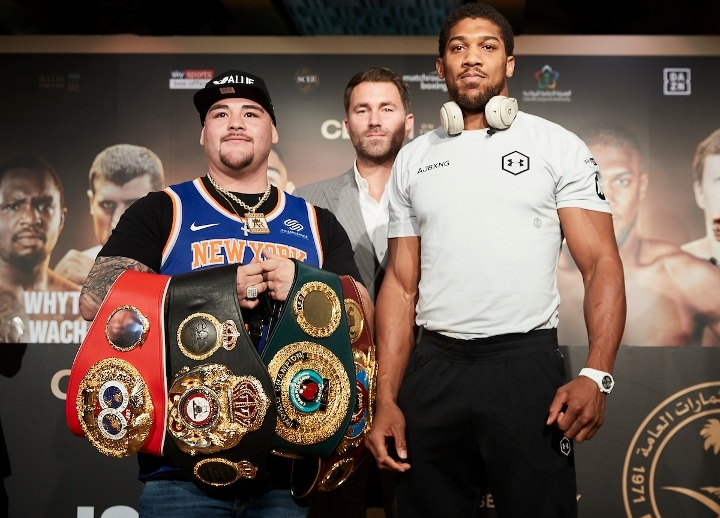 Earlier Friday, British heavyweight contender Dillian Whyte weighed a career-high 271¼ pounds for his 10-round bout with Poland’s Mariusz Wach. The 6-feet-7 Wach weighed in at 270 pounds.

Whyte was 11¼ pounds heavier Friday than he had been for any of his previous 27 professional fights. His highest official weight before Friday was the 260 pounds he weighed when he stopped Malcolm Tann in August 2017.

Whyte (26-1, 19 KOs) will fight for the first time Saturday night since he beat Colombia’s Oscar Rivas by unanimous decision in a 12-round encounter July 20 at O2 Arena. Whyte, 31, has been involved in controversy since his victory over Rivas because he went before the British Boxing Board of Control the morning of their fight due to an adverse finding in one of his performance-enhancing drug tests overseen by UK Anti-Doping.

Wach, 39, has won back-to-back bouts over opponents with losing records. Wach (35-5, 19 KOs) lost each of his three previous bouts, two of which were TKO losses to Jarrell Miller and Martin Bakole.

The four aforementioned fights will be part of a Sky Sports Box Office pay-per-view show in the United Kingdom (5 p.m. GMT; £24.95 in HD). The Joshua-Ruiz rematch also will headline DAZN’s stream in the United States (noon ET/9 a.m. PT).

[QUOTE=RJJ-94-02=GOAT;20511268]😂😂😂Never listen to Buncey... he’s always just trying to hype the fight. I think he’s a hilarious cause he’s always saying some crazy sh**. Great character.[/QUOTE]This actually happened after my initial comment now amended to me thinking that Ruiz was…

[QUOTE=Ricky12;20511188]Prior to the rematch I shouldnt have listened to the so called boxing experts who were in the media workout .Steve Bunce the ex boxer turned boxing pundit who works for the BBC said it was good weight that Ruiz…

[QUOTE=Thraxox;20511087]Sure.......but after schooling him, he was just fat right?[/QUOTE]Wishful thinking as well.Hence I wanted the underdog to win a second time.My wishes clouded my judgement.

[QUOTE=deathofaclown;20233088]Heavy indeed, but i agree, the more i think about it: Ruiz isn’t going to be fighting on the backfoot or going for any form of agility. His tactic is get closer to AJ and throw short punchers. Maybe he…