Nonito Donaire is always on hand to remind us why we love this sport.

He’s nearer the end than the beginning but his chin is still resolute.

He remains a destructive hitter.

He is quick with a smile, in victory or defeat, and is happy to shake hands or an embrace, whether he wins or loses.

He answers hard questions. He loves his wife. He’s a role model to his kids. He’s adored, admired and appreciated by boxing.

He’s given us Knockouts of the Year, Upsets of the Year, he’s bounced through the weights chasing greatness – not always money, but legacy – and he’s taken aim at the best over and over.

We should not have questioned him, but the vast majority of people in boxing thought it would be a matter of time before the vicious Japanese whirlwind Naoya Inoue swirled through him and made him his 17th stoppage victim in 19 fights in last week’s World Boxing Super Series finale.

Instead, Donaire finished his 12-round war with the pound for pound ‘Monster’ on his feet. Inoue longingly held onto the Filipino when they embraced at the end, a sliver of skin missing above his right eye, an orbital bone broken, part of his nose had been fractured and blood was streaming from it.

It had not been a procession or an announcement, it had been a gutcheck that solidified Inoue’s status as one of the best of the world, a fighter who, after a rest, will come back with experience you can’t teach and an education you can’t buy.

The respect wasn’t merely between the fighters, it was felt throughout the sport.

Yes, Inoue had won the World Boxing Super Series bantamweight crown but Donaire shared the spoils around the world with the credit he’d earned in defeat.

What happened next had the usually hardened features of social media warriors fighting back tears.

Donaire had promised his two young sons, who had travelled with him to Japan, that he would be coming back from the arena with the Muhammad Ali Trophy, so he asked his conqueror whether he could borrow it overnight for Jarel, six, and four-year-old Logan. Because unlike almost everyone else, Donaire had believed his name was on the trophy.

Critics thought he was added to the tournament because of name and novelty value, an old ex-champion with a valuable name and a broad fanbase that stretches across continents. 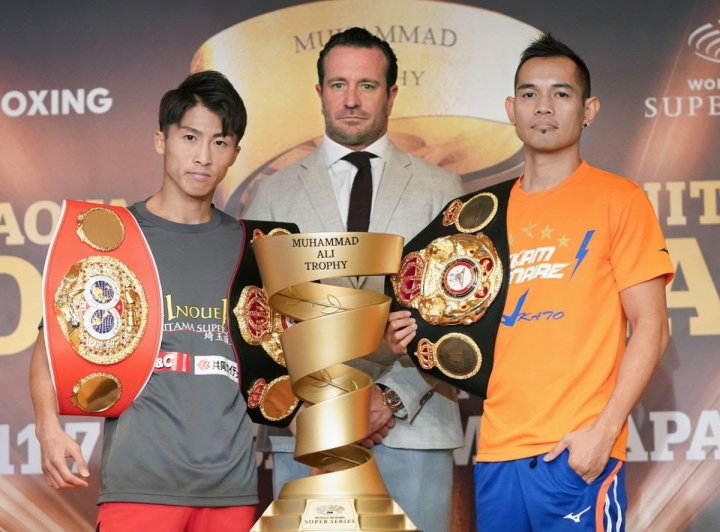 From the start, he thought it would boil down to him and Inoue and he knew when he met the tournament favourite before the event formally kicked off that they would not only cross swords at some point, but that they would tell the world far more about each other.

For Donaire it was destiny, and due to Inoue’s kindness he did get to share the trophy with his boys, even if it was just for the one night.

Of course, you can’t please all of the people all of the time. Not in boxing. Some repeatedly checked replays to see whether Donaire had actually recovered from a horrendous 11th-round body shot that eventually saw him drop to the floor where he listened to the referee’s count.

The only remote point up for debate has been feasted on by many but not only is irrelevant, but who even cares. No one officially complained. No inspector was asked to explore. Two warriors gave their all and no one watching should have been looking again with a stopclock in one hand and magnifying glass in another trying to split hairs when the very best of this sport was on display. Despite that, there are always people trying to seek negatives instead of positives, especially in boxing. And they are often right, there are a lot of negatives in the sport but that doesn’t mean you must actively look for them when the focal point is, as a rarity, in the plus column.

And there have been so many pluses from the WBSS. Over the last three seasons it has produced one Fight of the Year contender after another. Two of the 2019 front-runners are now Inoue-Donaire and the Josh Taylor-Regis Prograis 140-pound thriller from two weeks ago.

It is a crazy logic, isn’t it? How pairing the best with the best results in high-class match-ups. Sure, the blend in styles always helps, but the formula is undeniable; the results speak for themselves. Kalle Sauerland and the team at Comosa have created a platform that has allowed some of the best fighters in the world to not only rise but to thrive. They’ve unified titles, cleaned out divisions, left parts of their souls in the ring and borrowed against their futures and the fans have often been delighted. There have been blips; legal wrangles, disputes and quarrels, but that’s sadly as much part of the sport as the wars, the blood, the emotion, the sportsmanship and the winning and losing.

And at its most humane level it allowed two warriors last week to share respect, and one to fulfil a promise to his two boys.

Boxing does a lot of things wrong, but the WBSS is something that must continue at all costs.

We all need more of Donaire and Inoue – the thrills, the spills, the respect and the kindness – in our lives and certainly in our sport.