Fury: Joshua is Tailor-Made For My Style, I Aim To Take Him Out Early

WBC heavyweight champion Tyson Fury was not overly impressed with the recent victory by Anthony Joshua.

This past Saturday night at the SSE Arena at Wembley, Joshua retained the WBO, IBF, IBO, WBA heavyweight titles with a ninth round knockout of mandatory challenger Kubrat Pulev, who went down four times in the contest.

Now the attention turns to a potential 2021 showdown between Fury and Joshua. 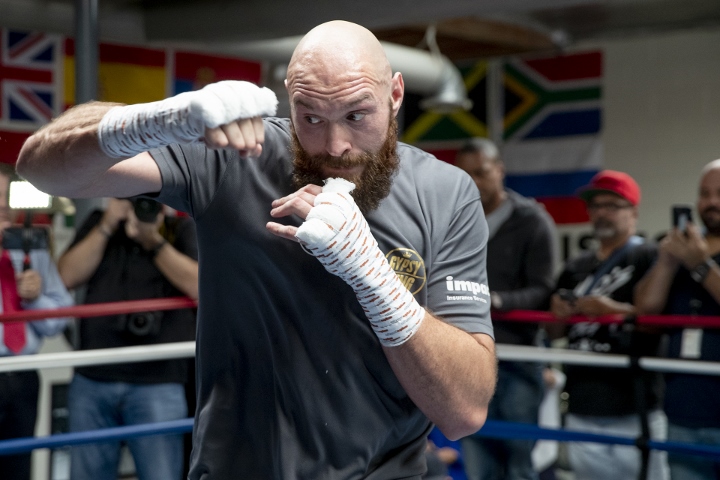 Fury has been out of the ring since February, when he captured the WBC world title by stopping Deontay Wilder in the seventh round at the MGM Grand in Las Vegas.

Even after watching this recent destructive performance, Fury is convinced that his domestic rival is a tailor-made opponent.

He saw nothing in Joshua's victory to make him change his opinion.

“No disrespect to Kubrat Pulev, he’s nearly 40-years-old and he hasn’t had a competitive fight since he fought Klitschko in 2014. He hasn’t been boxing regularly against high-level opposition and at 40-years-old he’s ready to put on his carpet slippers anyway," Fury told Good Morning Britain.

“I’m not just saying it because he’s a rival of mine and going to be one of my opponents - I’ve said for a long time that I do believe Anthony Joshua is tailor-made for somebody with my style. I think it’ll be one of the most explosive and quickest fights we are going to see and I’m aiming to take him out inside four rounds.

“I said that about Deontay Wilder and not many people listened and I’ll say it again about Anthony Joshua. He’s standing in my way of total supremacy of my era and he’s the only one left I haven’t beaten. Immortality awaits, I’m one win away from it.”

I think if he does it will be late..... Joshua more vulnerable later than sooner in the fight

How many people has Fury finished early? When you say Fury has struggled against bums, his fan club claim he fights to the level of his opponent. And according to them, AJ is an unskilled, stiff robot. So why will…

[QUOTE=LoadedWraps;20953401][COLOR="Navy"]AJ will be easy work. Hes too textbook and Fury eats guys like that alive. He reads you and knows what you will do before you do it. He will take everything away from AJ and will hit him at…

I see Fury playing with his food for 12 rounds and getting a wide decision.

I love fury, he's a fighter. A proper, dictionary definition fighter. No messing around. Get in and job done