Fury: I'd Beat Andy Ruiz With One Hand, I'll End Wilder in Four

Ruiz will defend his IBF, IBO, WBA, WBO world titles against Anthony Joshua in a rematch on December 7th in Saudi Arabia. The first time around, in June, Ruiz stopped Joshua in the seventh round.

Fury is back on Saturday night, when he faces undefeated contender Otto Wallin at the T-Mobile Arena in Las Vegas. 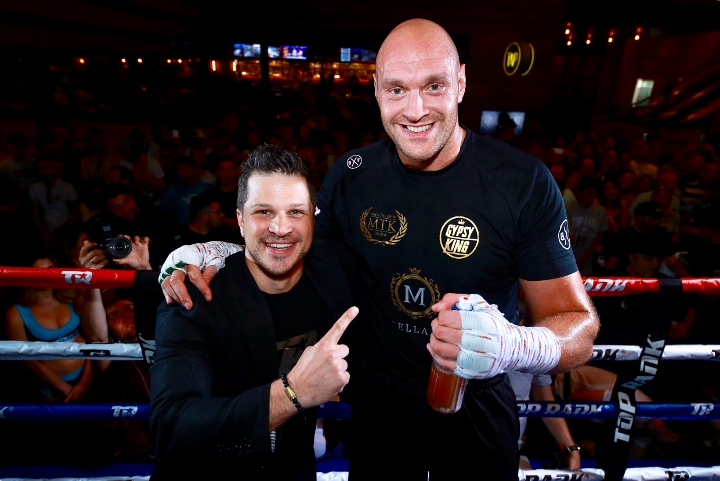 Fury believes that he would handle someone like Ruiz with one arm.

“I think his win over Anthony Joshua was very good on two week’s notice. I would tie one hand behind my back and beat him with either one. I’d jab his nut right off. That would be the easiest fight ever," Fury told the ‘Hotboxin’ with Mike Tyson’ podcast.

Should Fury beat Wallin, he would move forward to a rematch with WBC world champion Deontay Wilder in February of next year.

“I’m going to fight this guy on September 14, then we’re going to go for the Wilder rematch on February 22nd,” Fury said.

“Then this time I’m not going to leave it to the judges, it’s going to be over within four rounds, then we’re going to move on.”

Fury explains that he's not motivated by world titles or money, he wants to have fun in the ring after snapping more than a two and a half year layoff in 2018.

“The second career, it’s not about winning belts or anything, it’s about having fun,” Fury said.

“It’s about doing what I love to do. That’s being involved in good fights, taking punches and hitting people back. I go into these fights and I don’t give a f***.

“I’m like a loose cannon, a crazy character, I don’t care if they hit me. I don’t care what they do, I’m going to enjoy myself in the fight. They’re there all serious, but I’m like doing dances, waving my hands in the air, doing dances. I don’t care anymore, I’ve gone past the stage of caring about fights.”

last time i checked he got robbed agaainst parker. and fury was ko by wilder and looked very mediocre in his past outing

[QUOTE=deathofaclown;20052560]Ruiz would have plenty of losses had he fought Haye, Vitali, Fury x2 etc Ruiz has fought two good fighters and is 1-1 in those fights[/QUOTE] This is true, BUT, Del never had more than 2 brain cells. I still…

[QUOTE=Angeljuice;20050190]Or maybe he'll just beat Wilder again, like last time.[/QUOTE] You're a delusional moron! If Wilder went to the U.K to fight Fury an got knocked on his azz twice an still got a draw.. Everyone would say Fury got…

[QUOTE=Curtis Harper;20052500]Del Boy doesn't have 2 brain cells to rub together, 9 L's and been ktfo 2 other times. C'mon, now.[/QUOTE] Ruiz would have plenty of losses had he fought Haye, Vitali, Fury x2 etc Ruiz has fought two good…