Denmark - WBO super bantamweight champ Dina Thorslund, 15-0, retained the title with a hard fought decision over Serbian Nina Radovanovic, 13-4. None of the ladies can be described as big but Thorslund was still much bigger than her opponent - and was expected to win easily.

However, after over a year out she looked rusty and had a tough time finding the range against Radovanovic, who scored with many wild right hands but faded down the stretch.

Thorslund scored well to the body and Radovanovic was close to going down late in the 9th - she was in fact counted over in the eigth but that looked like the referee made a mistake in ruling a knockdown instead of a slip. 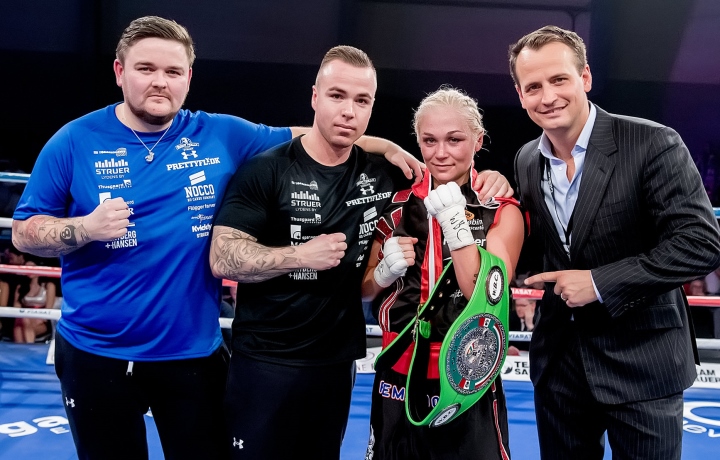 Super middleweight Oliver Zaren, 3-0, and trained by Mikkel Kessler, won over Bulgarian journeyman Konstantin Alexandrov, 10-44-3, over six. It was scored 60-54 on all cards in a one-sided fight with no highlights. Zaren boxed and one can tell he's learned a lot from the Viking Warrior but punching power is hard to learn.

Alexandrov knew what to do and how to do it in order to last the distance and he did just that and was never stunned.

Welterweight Oliver Mollenberg, 6-0-1, won a six round unanimous decision over Serbian Nikolaj Vlajkov, 6-6-1, and the official scoring was 60-54 on all cards - but it was a close, hard-fought competitive fight all the way.

Vlajkov caught the Dane flush on the chin in the first and fifth and had his opponent in trouble. Mollenberg was out to impress and that nearly cost him the win. As it was his better conditioning and schooling saw him win a close decision - but it was closer to a draw than to the shut out decision the judges came up with.