Golden Boy Promotions CEO Oscar De La Hoya has made it clear that Canelo Alvarez (50-1-2, 34 KOs) will have the final word on whether or not a trilogy fight takes place with Gennady Golovkin (38-1-1, 34 KOs).

Last month, Canelo captured the WBC, WBA middleweight titles with a twelve round majority decision over Golovkin at T-Mobile Arena in Las Vegas.

During the closing of the World Boxing Council's convention in Kiev, Ukraine, the 'Golden Boy' reported that next week he plans to sit in Guadalajara with Canelo, Eddy and Chepo Reynoso to discuss the next step, which will include a decision regarding the television platform of where his fights will go. 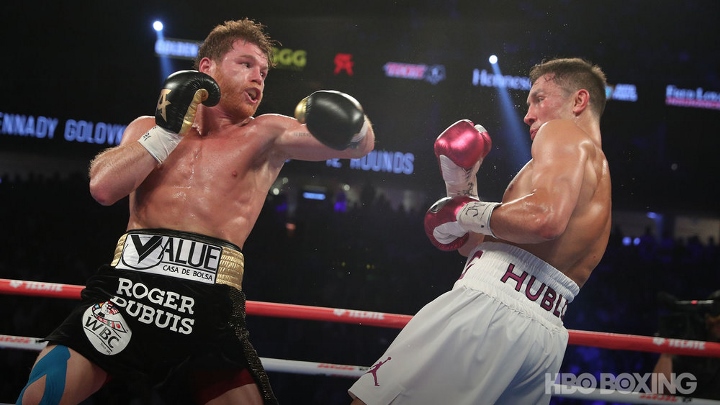 De La Hoya explains that he's currently not focused on the trilogy fight with Golovkin.

The first ordered of business for Canelo, is the possibility of fighting again on December 15th - and their future plans for a new network deal, after HBO announced their decision to drop boxing at the end of 2018.

"It was an incredible fight, I'm not going to rule out a third one (with Golovkin), the public deserves it - but first, Canelo has already surpassed him, he won and we'll see if he gives [Golovkin] another chance," said De la Hoya to ESPN Deportes.

"(I spoke to Tom Loeffler), we just saw him, I'm not thinking about the rematch with Golovkin, I have other plans for Canelo. I'm going to Guadalajara next week to sit down with him and discuss the future."

If Canelo decides to fight in December, De La Hoya would love to see that contest takes place in New York City.

It was revealed that Canelo would receive a brand new WBC belt that credits him as a middleweight champion on October 15th in Mexico City in a special ceremony.

"Canelo and Mexico deserve it, that's the way it should be, Canelo is a representative of everyone in Mexico and we on this side (in the United States) are proud of him," said De la Hoya.

90-10 split take it or leave it lol its gonna get real for Golovkin and Loeffler now. they have ZERO leverage.

Canelo's going to build a NYC fan base with the Rocky fight and then go back for a GGG trilogy on Cinco de Mayo weekend 2019. :boxing: You heard it here first.

[QUOTE=twosweethooks;19167333]Well Duh Ding Dong! Redass waited G out as ODH is happy about to just get OLD! But even after G got older he still won 8 to 4 in the first and it was super close in the second…

GGG now knowing he can't win on decisions will go all in in the 3rd fight n I think win. They'll fight again Canelo Vs GGG triples quadruples any amount of money hell make vs anyone else and doubles triples…