As we found out, everything.

From losing Jarrell Miller as an opponent thanks to multiple failed drug tests to replacement foe Andy Ruiz Jr. shocking the world by taking Joshua’s titles by force, the Brit’s Big Apple visit was a lost weekend no one saw coming.

Maybe not even Ruiz. Sure, he was one of the first to offer to step in for Miller, but hey, that’s a big payday, and even if you lose, no one faults you for taking the shot, meaning another big fight usually follows. So the Californian clearly had nothing to lose by throwing the dice, and he was credible enough for promoter Eddie Hearn to give him what he asked for.

Credible. Safe, but not too safe. The perfect opponent for Joshua to give the fans a show before leaving the ring with his belts and the probability of even greater riches in the fights to come.

And nothing happened during fight week to make any of us think otherwise. Joshua and Ruiz met the press, took their photos and had their cordial staredowns. Meanwhile, the city embraced the visitor from England, with billboards around the city announcing that he was here.

A few days before the fight, one of Joshua’s sponsors, Under Armour, opened a pop-up shop, and members of the company that spent time with the heavyweight champ raved of both the high-tech and old school training he put in to prepare for June 1. Joshua didn’t show up on the night the shop opened, but that was presumably because he was focused on the task at hand.

“He's not here for a brand,” said Attica Jaques, UA’s Head of Global Brand Management. “He's here for the sport and we have to respect that.”

It was the perfect storm. Joshua, the man with the body chiseled out of granite, the smile and personality of a worldwide sporting icon, and someone with three heavyweight championship belts, in the greatest city in the world. 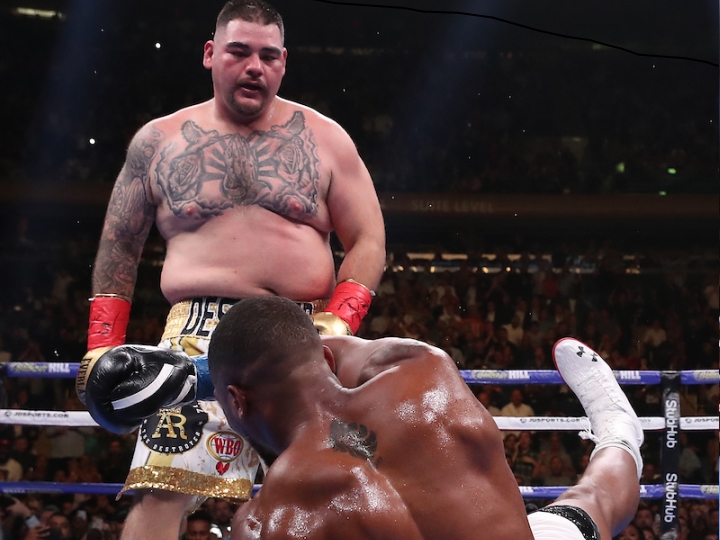 All he had to do was show up in Madison Square Garden and beat the chubby kid who was in the ring with the best heavyweight in the world simply because someone had to be in there with him.

According to fans and media breaking down the fight, the best case scenario for Ruiz was that his fast hands and Fight IQ would allow him to take Joshua into the middle rounds before going away. Worst case scenario? Joshua blitzes and dismisses him in two rounds.

The latter scenario didn’t happen, but for those first two rounds, everything went according to plan for Team Joshua. In the third, it got better when a flush left hook put Ruiz on the deck. Ruiz didn’t seem to be too hurt, but in watching the DAZN documentary on the fight, One Night, the sound and impact of the blow was so clear that it’s amazing that he was able to rise.

Maybe Joshua noticed the same thing and lost a bit of his swagger. Perhaps then he realized that he was in a tougher fight than the one he was expecting. No matter what was going through the champion’s mind, he was prepared to go forward and try to finish the job. He drilled Ruiz with a right hand, but the challenger took it and returned the favor with a left that took Joshua’s legs away. Seconds later, the Brit was on the canvas. The crowd at MSG erupted as the coronation became a coup d’état.

Now everything had changed. The focus wasn’t on Ruiz’ 268-pound frame, but on the hands that kept touching and kept hurting Joshua. To his credit, Joshua kept on fighting, even though he was rendered largely ineffective by a young man about to change his life forever.

By the 1:27 mark of round seven, it was over. The Snickers-eating everyman had won the fight he had no right to, and he was the heavyweight champion of the world.

Walking out of Madison Square Garden that night, the Brits were shocked but not shocked enough to stop singing, while Stateside Joshua supporters were a little more subdued as they admitted that in the world of boxing, anything can happen. As the old saying goes, “That’s why they fight the fights.”

Over the next few days and weeks, Ruiz represented what can happen when talent meets opportunity, though what happened in MSG wasn’t luck. It was boxing. And it was a beautiful night.

Six months later, the planets aligned once more as Joshua took back his titles from a fighter who chose not to do the work necessary to go from one-hit wonder to long-reigning champ. Again, that’s boxing. And life in boxing goes on as it was before June 1.

But for one spring night in New York City, it may not have been Buster Douglas beating Mike Tyson, but it was BoxingScene’s easy pick for 2019 Upset of the Year.