Andy Ruiz Reflects on Losses To Parker and Joshua

2019 was a very up and down year for Andy Ruiz Jr.  In June he shocked the world by stopping Anthony Joshua to capture the WBA, WBO, IBF and IBO heavyweight titles. Joshua would exercise his immediate rematch clause and win a shutout on the scorecards against a badly out of shape Ruiz in December.

Ruiz would reflect on this fight and several other topics in an Instagram Live interview with WBA President Gilberto Mendoza Jr.

The first topic discussed was Ruiz's first title shot which took place in 2016 against Joseph Parker.  Ruiz would end up losing a majority decision in Parker's backyard that left observers divided on who deserved the victory and the vacant WBO heavyweight title that was up for grabs.

"When you fought against Parker, from my point of view, I can speak on it publicly now because a lot of time has passed and it wasn't for my organization's title but I thought that you won. What did you feel in that moment," Mendoza stated.

The 30-year-old Ruiz was very pragmatic in his answer, stating that he could have delivered a much better performance. 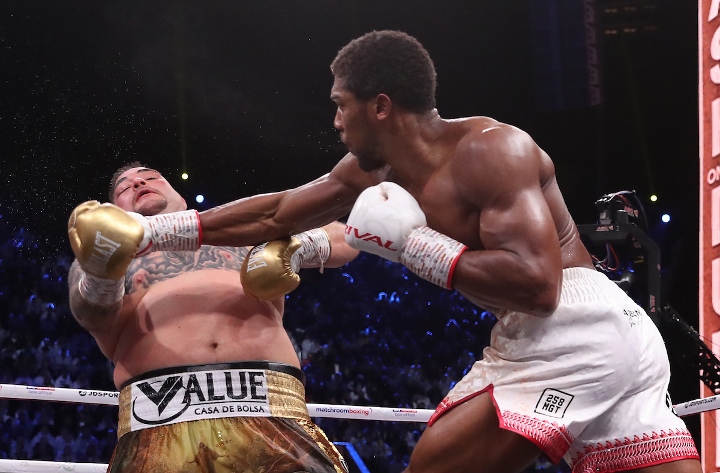 From there Mendoza shifted gears and was surprised at who Ruiz said has been the toughest opponent of his career.

"My toughest rival I believe would have been my last fight. I could have done a lot of things differently," Ruiz said before Mendoza cut in saying, "the last one? Anthony Joshua?"

Ruiz insists that he is a different fighter now and has learned his lesson from cutting corners. He has since parted ways with trainer Manny Robles who led him to become a champion and was also in his corner when he lost.  There has been mutual interest in Ruiz and Canelo Alvarez's trainer Eddy Reynoso working together.

"It was that fight because I lost a lot.  Those titles would still be mine if I did everything right.  Thanks to God this happened because I learned from it. Now it is time for me to focus and win those titles back," Ruiz stated.

[QUOTE=VatoMulatto;20520122]Ruiz been a fatass his entire career. He lacks the work ethic and discipline to put himself in the best possible shape.[/QUOTE] that's a bit harsh. He's done enough to become a professional boxer, win a title belt and get…

The only thing to do now is for him to pick himself up and start going. He should rematch Parker or Whyte

Ruiz been a fatass his entire career. He lacks the work ethic and discipline to put himself in the best possible shape.

Would love to see Ruiz face Wilder. What a firework display that would be! I'm not convinced Wilder would blast Andy out early either. He's got some half decent chins and would be a nightmare stuck on Wilders chest -…