NEW YORK – Andy Ruiz Jr. pulled off one of the most stunning upsets in boxing history Saturday night.

The 6-feet-6, 245-pound Joshua (22-1, 21 KOs) was knocked down twice apiece in the third and seventh rounds. He got up a second time in the seventh round, but Joshua, without his mouthpiece and blood flowing from his nose, backed into his own corner.

Referee Michael Griffin asked a dejected Joshua if he wanted to continue. Joshua answered, “yes,” but Griffin waved an end to the fight at 1:27 of the seventh round.

The 29-year-old Ruiz (33-1, 22 KOs), of Commerce, California, was ahead on two of the three scorecards when the fight ended.

“Man, I just wanna thank God for giving me this victory,” said Ruiz, who became boxing’s first Mexican heavyweight champion. “Without him, this wouldn’t have been possible. And I just feel so good, man. This is what I’ve been dreaming about. This is what I’ve been working hard for and I can’t believe I just made my dreams come true.”

Ruiz is contractually obligated to give Joshua a rematch. It can be immediate if Joshua wants to fight Ruiz next. 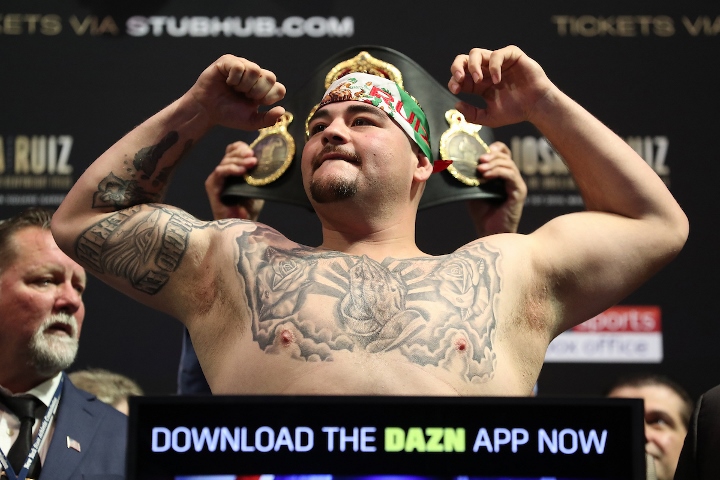 Eddie Hearn, Joshua’s promoter, told DAZN’s Chris Mannix in the ring that the rematch will take place in the United Kingdom.

Regardless, Joshua’s upset loss ruined his much-anticipated heavyweight title showdown with WBC champion Deontay Wilder (41-0-1, 40 KOs). In the immediate aftermath of his first professional defeat, Joshua apologized to his fans for disappointing them.

“It just wasn’t my night,” Joshua said. “It was Andy Ruiz’s night. But look, you know what? It’s good for the TV, it’s good for DAZN and the people watching. And now I’ve gotta go and do it again.”

There wasn’t much action during the fifth and sixth rounds, but Ruiz unloaded on Joshua again in the seventh round. He hurt Joshua with another right hand and Joshua went down for the third time in the fight 23 seconds into the seventh round.

An exhausted Joshua got up and landed a left-right combination, only to have Ruiz hit him with another straight right hand that sent Joshua to his gloves and knees.

After flooring Joshua twice during an incredible third round, Ruiz was cautious throughout the fourth round and didn’t throw many punches. His inactivity enabled Joshua to regain his senses, much like he did during the seventh round against Wladimir Klitschko in their epic April 2017 fight.

Joshua came back from a sixth-round knockdown to stop Klitschko in the 11th round that night at Wembley Stadium in London.

In the previous round, it appeared it would be Joshua who would win by knockout.

A left hook by Joshua dumped Ruiz to the seat of his trunks with 2:18 to go in the second round. That was the first knockdown Ruiz suffered in 34 professional fights, but he responded by fighting out the trouble.

Joshua went for the knockout and caught Ruiz with a hard right hand as soon as the action resumed. Joshua got careless, however, and allowed Ruiz to catch him with a left hook and right hand that hurt the defending champion.

Another left hook by Ruiz buzzed Joshua with 1:51 left in the third round and Joshua went down four seconds later. A stunned Joshua got up by the time Griffin counted to seven, but he was still hurt as Ruiz pressured him.

Joshua held as best he could to fend off Ruiz for about 50 seconds. Ruiz eventually backed Joshua into a neutral corner and unloaded a barrage of power punches on Joshua.

The damage done by Ruiz’s right to the side of his head seemingly sent Joshua to the canvas again with just a few seconds to go in the third round. He reached his feet again, but the bell rang and saved Joshua from further trouble before the action resumed.

“That was my first time getting dropped on the floor,” Ruiz said. “But, you know what? It just made me stronger and it made me want it even more. And I just had to knock him down back, you know?”

Joshua unloaded hard right hand about 45 seconds into their fight, but Ruiz blocked it. Ruiz landed a left hook to the side of Joshua’s head with about 20 seconds to go in the opening round.

The Joshua fight was his second bout in six weeks, but Ruiz went right back into camp for the opportunity to challenge Joshua. In his previous appearance, Ruiz stopped Russia’s Alexander Dimitrenko (41-5, 26 KOs) following five one-sided rounds April 20 at Dignity Health Sports Park in Carson, California.

[QUOTE=mlac;19803652]Isnt it obvious? he was trying to quit without looking like he was quitting. he wanted out even after the 2nd KD, he did the same thing. layed on the ropes and said yes he wanted to continue but he…

[QUOTE=BOXING-SCRIBE;19803546]Negative. Mexican fighters are legit, even the bums can pull an upset, it is heavy in the blood.The Chavez statement is sort of a mute point. We have had people from several countries reign for a decade. Julio had a…

[QUOTE=Don Pichardo;19799767]That’s what I saw. Then he said “what”! when ref waved the fight. He looked fine to be. Physically that is. Skill wise he looked horrible.[/QUOTE] Isnt it obvious? he was trying to quit without looking like he was…

[QUOTE=marikudo;19801359]I always thought Joshua is overrated. He got knocked down many times in his fights so I thought one time he will lose by a knock out just like what happened. Joshua has a glass jaw like Khan that's why…

[QUOTE=MastaBlasta;19797109]They are embarrassed and desperate now. THat could be good or bad news. I think he goes back too fast and Ruiz beats him again. This fight shows what I've believed all along: the HW Division is wide open if…