Nearly six years of legal matters between All-Star Boxing and the tag team of Golden Boy Promotions and Saul ‘Canelo’ Alvarez has finally reached a resolution.

At least until the appeal process puts it all back in motion.

BoxingScene.com has learned that the jury assigned to the ongoing court case in Miami reached its verdict on Monday evening, handing down what in an actual boxing match would be referred to as a split decision. Alvarez has been ordered to pay $8.5 million to All-Star Boxing, an amount determined to be "unjust enrichment" he experienced as a result of such relationship. 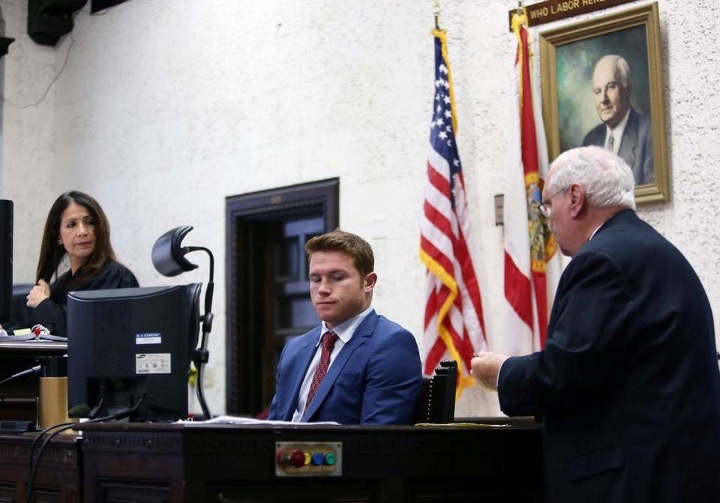 Golden Boy Promotions – who first began working with Alvarez in 2008 and has been his primary promoter of record since 2010 – was fully exonerated in the case, despite efforts from All-Star Boxing to prove tortious interference on the part of the California-based promoter.

The jury also declined to issue punitive damages, which would have resulted in triple the amount had the verdict gone the other way.

“The jury found there was no contract between Canelo and All-Star Boxing,” Golden Boy spokesman Stefan Friedman outlined to BoxingScene.com on Monday evening. “It means Golden Boy Promotion is off the hook and entitled to lawyer fees incurred.”

Despite being cleared of any wrongdoing, Golden Boy will stand by Alvarez in regards to the appeal process, fitting since the California-based entity remains his official promoter, as opposed to having to return to sender as part of the conditions All-Star Boxing initially sought.

The monetary amount issued comes at the responsibility of the boxer, who attempted to argue that the four-year agreement he signed with All-Star Boxing in 2008 was in English and – therefore – unclear to him as to the exact terms of the deal.

As Alvarez – who hails from Guadalajara, Mexico - only spoke and read in Spanish at the time, the insistence was that – sans sufficient translation – he believed he was signing a visa application to travel to and fight in the United States.

Alvarez and All-Star Boxing were together for nine fights from Sept. ’08 to Dec. ’09, with promoter Felix ‘Tutico’ Zabala, Jr. – who was not in a position to comment on the outcome of the case as this goes to publish – estimating $180,000 invested into the boxer’s career. Several fights included Golden Boy Promotions’ hand in such events, including their getting Alvarez on U.S. – Telefutura at first (now known as UniMas) before eventually showcasing him on HBO Latino and HBO’s flagship station.

“What the jury came back with and determined, was that Canelo had experienced (unjust) enrichment,” Friedman explained. “That is the reward that was issued.”

Golden Boy was the primary promoter for Alvarez’ career from 2010 onward, at which point All-Star Boxing first filed its lawsuit. The first court date was set for 2011, delayed several times through the years as Alvarez successfully argued on a number of occasions that in order to be present for the duration of the trial he would have to be on a down cycle from fighting and not entering training camp for his next event.

That moment finally came upon the start of trial on May 23. By then, Alvarez had already wrapped up his May 7 knockout win over Amir Khan and had placed talks on hold for a potential showdown with unbeaten middleweight titlist Gennady Golovkin.

Alvarez even vacated his World Boxing Council (WBC) middleweight belt – for which Golovkin was mandatory challenger – as per a pre-negotiations promise to not hold the title hostage given the 15-day deadline in place to come to terms for such a clash.

Whether he next faces Golovkin or any other boxer in or around the middleweight division, what is immediately on the collective minds of the Golden Boy staff is returning to in-ring action.

Alvarez has emerged as one of the sport’s leading superstars in recent years, more so upon the recent retirement of both Floyd Mayweather and Manny Pacquiao within the last 12 months.

His first title win was preceded by the launch of this very court case, with All-Star Boxing announcing its intent to reclaim its fighter prior to Alvarez’ vacant WBC 154-pound title fight with Matthew Hatton in March ‘11. Alvarez won the fight by 6th round knockout, obtaining his first belt and in his debut as an HBO headliner.

It was a role he’d regularly enjoy with the exception of appearing on Pay-Per-View undercards headlined by Mayweather, until both boxers made their way to rival network Showtime. Alvarez’ first fight “across the street” came in Sept. ’12, knocking out Josesito Lopez in five rounds.

Seven months later, he became a unified titlist with a 12-round win over Austin Trout, leading to what would serve at the time as the most lucrative event in boxing history – as well as his lone loss in the ring.

Alvarez was soundly outboxed by Mayweather in their Sept. ’13 blockbuster event, but a night where both walked away with fistfuls of cash. The show set records for largest box office take and PPV revenue generated, though both marks since far and away surpassed by Mayweather’s winning performance over Pacquiao last May.

Still, the box office appeal enjoyed by Alvarez was introduced throughout the case, establishing the argument that Zabala helped lay the foundation for the star he has now become.

The red-headed Mexican soared to new heights upon his return to HBO. His first fight under a new network agreement – whose terms are undisclosed but believed to be at least five years – was a rousing 3rd round knockout of James Kirkland last May, a fight that played to 30,000 fans in attendance at Minute Maid Park in Houston, as well as more than 2 million viewers on HBO.

The latter tally was the most watched cable-TV boxing event since 2006, leading to his showdown with reigning World middleweight champ Miguel Cotto last November. Alvarez annexed the crown with a unanimous decision win, becoming the first-ever boxer from Mexico to claim the lineal middleweight crown.

The combined star power of Alvarez and Puerto Rico’s Cotto produced a PPV event that – according to recently reevaluated figures – have sold more than 930,000 units and more than $60 million in revenue.

Exact totals of his PPV-headlining knockout win over Khan last month at the brand new T-Mobile Arena in Las Vegas have yet to be confirmed or formally revealed. Still, between PPV sales, box office gate, international rights and sponsorship, the event is believed to have generated upwards of $50 million in total revenue, further confirmation of his star power.

For now, it proved to work against him in the eyes of the jury in the Dade County court house. However the appeal process plays out, all parties involved get to go back to what they know and do best – boxing business.

Alvarez’ next planned ring appearance is set for September 17. Golden Boy has a tentative hold on the MGM Grand in Las Vegas, though that could change to the T-Mobile Arena – or even the Dallas Cowboys’ home, AT&T Stadium in Arlington, Texas – with the right opponent, namely a much desired showdown with Golovkin.

Meanwhile, All-Star Boxing will go all in for its summer season of Boxeo Telemundo, which is due to launch June 24 in Tampa, Florida.

ahh what bliss... when Jake Donovan explains the meaning of circumstances to ggg boys :usa2:

[QUOTE=aboutfkntime;16796974]Pretty sure he came to the same conclusion I did, that you are an idiot fanboy.[/QUOTE] [QUOTE=Ray*;16789642]Well got to say I admire you reply, I wasn't expect you to post a reply like this one. But I was shocked with…

[QUOTE=JUNIABOY;16796833]Me and Ray are good. And neither of us like your trolling. So gtfo, troll...[/QUOTE] Pretty sure he came to the same conclusion I did, that you are an idiot fanboy.

I thought it would be more