One of the tourney's best boxers and clearly its biggest puncher Bakhodir Jalolov made a crucial difference in the overall standings as his gold medal super heavyweight effort signalized a win for Team Uzbekistan in an entire competition.

To do so, 23-year old Jalolov, who vaporized American Torres in the quarterfinals (the boxer from the US was knocked out cold and taken to the hospital on a stretcher), showed great tactical skills and - yes power - to win over #1 rated Kazakhstani Kamshybek Kunakbayev.

Jalolov, who is 6-0, 6 KOs, as a pro, and holder of the NABF Junior title was considerably bigger at 6'7'' than Kunakbayev. He smartly worked behind a jab and was on back foot for a majority of the fight. The shorter Kazakh was forced to fight his way in against, literally, tall odds. He was mildly successful in doing so but Jalolov landed significant punches as well. 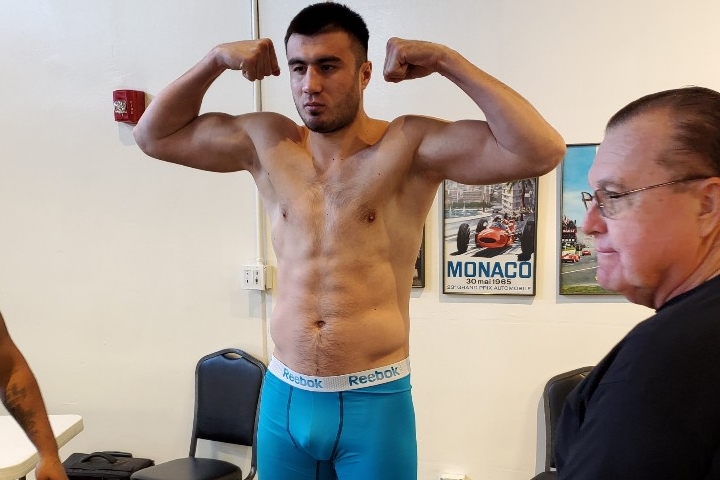 In the second, the Uzbek boxer landed a very crisp shot that wobbled Kunakbayev but he somehow retained an upright position. Aggressive Kunakbayev fought his heat out in the last round but Jalolov stood his ground well. Final scores were: 30:27, 30:27, 30:27, 29:28 and 29:28 - for the rising Uzbek prospect, who should be very carefully looked at as a future heavyweight prospect. Bronze medal winners were Justin Huni from Australia and Russian Maxim Babanin.

All in all, Uzbekistan proved its amateur prowess by winning three gold, one silver and one bronze medals. Russia, fighting at home with a renewed team, is second with three gold and one bronze. Also winning gold are Kazakhstan (six medals in total - the maximum of the championship) and Cuba.

Nurdualetov was more successful in the exchanges, while Ruzmetov made the same mistake over and over again by moving straightbackward with his hands down. Final scores were: 30:27, 30:27, 29:28, 29:28 and 30:27 - for the Kazakh boxer. Famed Cuban four-time world champion and 2016 Olympic gole medalist Julio Cesar La Cruz (Cuba) and Benjamin Whittaker of England were awarded bronze medals.

Russia is 3-0 in the finals, following the victory by heavyweight (means cruiserweight in the pros - weight limit is 91 kg) Muslim Gadzhimagomedov over Ecuadorian #7 Julo Cesar Casillo Torres. The fight was closer than final scores reflect as more experienced Castillo, who has lost twice in the initial rounds of 2012 and 2016 Olympics, did a great job trapping #5 Gadzhimagomedov and landing crisp punches in his way out.

After the faulty first, the Russian began to fight more aggressively and dominated his opponent in the second. Both fighters fought on even terms in the third round. Final scores were unanimous: 30:27, 30:27, 30:27, 29:28 and 29:28 - making it 5:0 for the Russian. Kazakhstani Vasily Levit and Bulgarian Radoslav Pantaleev captured bronze medals.

#1 rated lightweight (63 kg) Andy Cruz Gomez became Cuba's first 2019 world champion with a workmanlike decision over #7 Keyshawn Davis - the only American to enter the finals. Davis showed some elements of the East Coast school of boxing, showing precise footwork, shoulder rolls but lacked aggression and enough punches to trouble Cruz. The Cuban was especially effective in rounds two and three, finally trapping the American in the third and landing some flashy combos to punctuate his win. The win was identical - 5:0 (30:27, 29:28, 29:28, 29:28 and 29:28).

Look out for Gleb Bakshi of Russia. The newly crowned middleweight (75 kg) world champion showed considerable promise as a future prizefighter in a final against surprising Filipino Eumir Marcial. After Marcial won the first round on his sheer activity #8 rated Bakshi came back with a crushing left hand, which put the unranked fighter from Philippines down on his pants.

Marcial got up but was never the same in the fight. Moreover, he was cut over his left eye later on in the round. Bakshi also showed poise and resolve in the final round, sustaining the pressure of Marcial and scoring with his own punches.

Bantamweight Mirazizbek Mirzakhalilov, who was ranked #7 coming in, became Uzbekistan's second gold medalist with another premature and extremely narrow win - over #1 rated Cuban Jorge Lazaro Alvarez, a three-time world champion (2011, 2013, 2015) and a two-time Olympic bronze medalist (2012 and 2016). Mirzakhalilov, not being a smooth operator, relied on aggression and pressure, creating problems for a sound technician from Cuba. In the second round, Alvarez landed a hard right hand to the Uzbek's head, which came rushing in and collided with Alvarez's face. The referee chose to stop the fight on a cut. One judge favored the Cuban: 20:18. Two saw it a draw: 19:19. Two had it for the Uzbel: 20:18. Tsendbaater Erdenbat of Mongolia and England's Peter McGrail captrued bronze medals.

Ten years since his 2009 Milano silver medal, 32-year old Russian veteran and #8 rated Andrey Zamkovoy, at welterweight, finally became a world champion after his cut-induced technical decision over dangerous Englishman Pat McCormack, who was rated #2 coming in. Zankovoy scored a count in the first round, blowing out Pat's mouthpiece with a straight left. In the second, both boxers collided, opening a cut on McCormack's face, effectively ending the fight.

In the opening final of the evening, 2016 Rio Olympics gold medalist Shakhobidin Zoirov took a short break from his recently started professional career to become 2019 world champion at flyweight.

It's going to be interesting to see how many go to the Olympic's & how many turn pro.

[QUOTE=Richard G;20073304]Damn shame that Justis Huni, the super heavyweight Aussie, had to withdraw due to sickness. Tall rangy fighter, very fast with a good style, he was doing well.[/QUOTE] Yeah I was liking him. Good movement for SHW

Damn shame that Justis Huni, the super heavyweight Aussie, had to withdraw due to sickness. Tall rangy fighter, very fast with a good style, he was doing well.

Good article. Thanks for the coverage. I do think it's ridiculous that pros can compete amateur tournaments though.