With Stevenson-Jack, Toronto Arrives As A True Fight City

For many years, Toronto was one of the only major cities in North America that wasn’t a thriving market for boxing. Typically, big cities are thriving markets for just about everything, but for a variety of reasons, that wasn’t the case when it came to boxing in Toronto.

Through the years, when Toronto has hosted a big fight, it always exceeded expectations. From Muhammad Ali-George Chuvalo to Jose Napoles vs. Clyde Gray to Aaron Pryor vs. Nicky Furlano, the city has hosted some of the sport’s best, and always proved hospitable. It’s just never received very many chances to host the party.

Roughly 5000 fans attended the Stevenson-Jack card. On its own, it’s a respectable figure that is on par with or beyond many of the sport’s world champions in the United States and Canada. But the figure doesn’t tell the entire story. The promotional team had just four weeks to sell tickets, after the card moved from Montreal’s Bell Centre across the border to Ontario. Promoters Yvon Michel and Mayweather Promotions quickly linked up with Lee Baxter Promotions, which moved its already scheduled card in Niagara Falls to accommodate the event, and together started the selling process on fast forward.

The fight had to compete--at the time it was announced--with both the Toronto Raptors and the Toronto Maple Leafs who were not only in the playoffs, but considered real contenders.

“With eight weeks’ notice, with the right fight, there’s no reason why we can’t sell out the Air Canada Centre,” said Lee Baxter. “There’s almost six million people in the Greater Toronto region, and a whole lot of them are sports fans. Our job is to turn them into fight fans.” 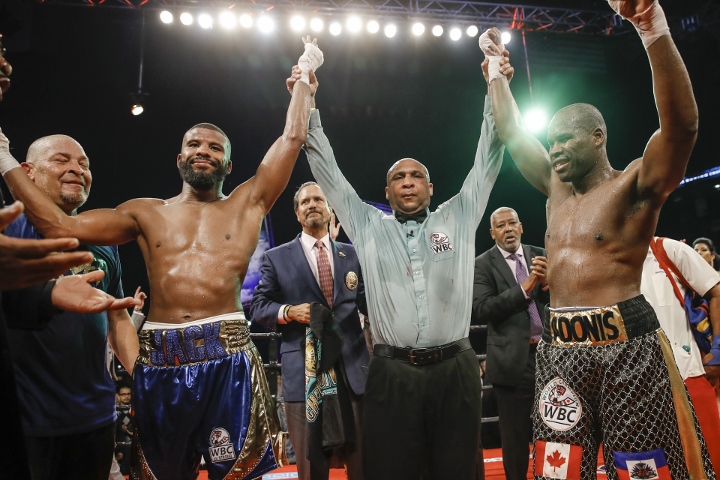 Though it should have been tough to find room in the local sports pages, the elimination of both the Leafs and Raptors, and the promise of the attendance of Floyd Mayweather gave the event a late media boost which put the fight in the consciousness of the general sports fans ever promoter dreams of acquiring.

Over the past two years, Baxter has proven that the city can be more than just a general interest market, where ticket sales simply go to the hippest event on any given night. There has always been a fight culture in Toronto, backed up behind several barriers to its existence. For many years, the province’s former athletic commissioner, Ken Hayashi, was a regressive force in the sport, often acting in cartoon villainesque ways to impede cards from happening. A same-day weigh-in and a rule permitting only 10 yards of gauze for fighters’ handwraps (as opposed to the 40+ allowed in almost every other jurisdiction) were Hayashi mandates. Moreover, late fight cancellations by the commission became commonplace enough that even attempting to run a boxing event in Ontario meant accepting the possibility of not just losing money, but losing it without the event ever even taking place. Ultimately, the WBC simply refused to sanction fights in the province for the safety of the participating fighters.

Under the commission’s new leader, Ray Dempster, rules have loosened for the better, and promoters are able and encouraged to run events in the city. Baxter has a regular club fight series in downtown Toronto at the Danforth Music Hall which sells out to its 1000-seat capacity each time, and local fights in the outskirts of the city promoted by Baxter and rival promoters United Promotions in Brampton and Mississauga have drawn between 5000 and 6000 fans respectively in minor league hockey arenas. Last year, Ontario saw 20 boxing events, and between fights that have already occurred and ones on the docket, the province is on pace to surpass that number in 2018.

One of the other hurdles Ontario fans--and by extension, Canadian fan at large—have faced has seemingly been cleared as well. For years, all of Showtime’s boxing content was unavailable in Canada, with no rights partner in the Great White North. Recently though, national sports broadcaster TSN scooped up the rights to all Showtime programming, and has been airing it mostly live in recent weeks (the Stevenson-Jack fight, however, was a pay-per-view event in Canada). The network also has the rights to second-window airings of HBO bouts, as well as live and replay rights for all ESPN boxing series.

The Canadian boxing market was strong enough to host an entirely different telecast running immediately before Stevenson-Jack on Saturday as well. Premium cable outlet Super Channel, which aired the World Boxing Super Series and early Top Rank on ESPN dates as well, launched its SuperBox Live series, designed to showcase Canadian talent. In its inaugural edition, it featured now-Canadian-based heavyweight prospect Oleksandr Teslenko on the undercard of Nico Hernandez-Szilveszter Kanalas in Wichita, KS. Teslenko, a Dibella Entertainment stable member, regarded as one of the top heavyweight prospects in the world, lives in Toronto, and is managed by Toronto’s Gary Freedman.

After the success of the Mayweather-McGregor press tour in Toronto, which was far and away the rowdiest of all the stops, promoters and networks were curious but unsure about testing the market. Talk to Leonard Ellerbe and others now however, and they’ll tell you about the potential of promoting a card in Toronto with Drake, featuring his buddy Gervonta Davis.

The question for Toronto may no longer be can it play host to big fights, but how many can it accommodate?

the main problem is there is literally only 1 canadian world champion and he is not generally a fan favourite due to his inactivity and perceived ducking of kovalev. i was at the fight and actually wanted jack to win…

the main problem is there is literally only 1 canadian world champion and he is not generally a fan favourite due to his inactivity and perceived ducking of kovalev. i was at the fight and actually wanted jack to win…

Good article Hopefully this is just the beginning of big fights in Toronto. They have infrastructure and population in place and maybe a untapped market Was at the fight and was talking to somebody about it being in Toronto and…