Dillian Whyte slammed the corner of Derek Chisora, who on Saturday night lost a twelve round unanimous decision to Oleksandr Usyk at the SSE Arena at Wembley in London.

Whyte had two furious battles with Chisora. He won a controversial close decision in the first outing in 2016, and was down on the cards when he knocked Chisora out in the twelfth round of their 2018 rematch.

But, the London fan-favorite was at times not active enough and appeared to tire badly down the stretch before he caught a second wind. 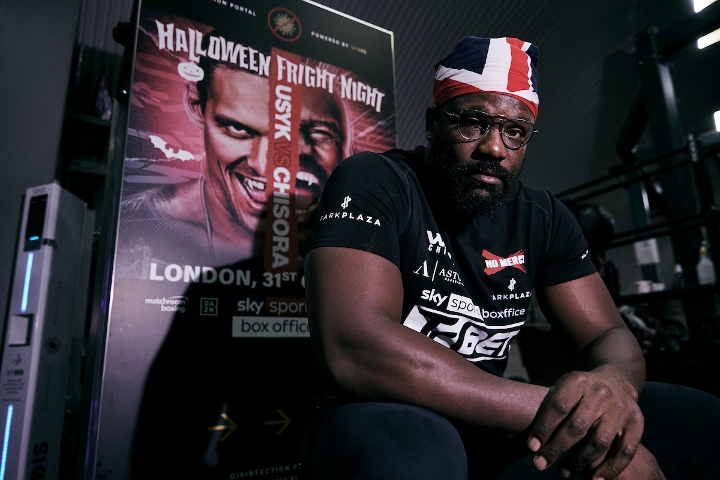 Whyte explained why his former foe needs to get a real corner - instead of using a bunch of "strength and conditioning guys."

He felt Chisora was not given proper advice during the contest - and that his team was a little too excited to see their man go the distance.

"All his team got in the ring, clapping and cheering like they were happy with what he did," Whyte said on BBC Radio 5 Live.

"Maybe their plan was just for him to survive the twelve rounds. Maybe. They’re crazy! That’s why he needs proper boxing coaches to be real with him, not your friends. This is a joke. I know I’m gonna get criticised for this but it’s a joke.

"You need your corner to give you good instructions as well but Derek wasn’t cutting him off, he wasn’t targeting the body. I don’t know what his corner was telling him. They’re not boxing guys, they’re just strength and conditioning guys, MMA guys. You need boxing coaches to tell you what to do. As a fighter you know what to do, but you need someone to help you with the game-plan at times because we are all human beings, we need guidance. That wasn’t in Derek’s corner. They worked him hard, got him in shape and thought that was enough. That’s not enough to beat elite guys unfortunately."

Whyte returns to the ring on November 28, when he faces Alexander Povetkin in a rematch. Back in August, Povetkin scored a brutal fifth round knockout of Whyte to capture the WBC's interim-title.

[QUOTE=Earl-Hickey;20852930]He cut off the ring fine until he gassed out, after 3 rounds he was sucking in air and lost his form, it is what it is he's almost 37 and a heavy guy. The game plan they had was…

[QUOTE=Tecnoworld;20853023]Chisora has a very poor technique, he goes forward and hits. But in this fight he even tried to jab sometimes. Simply, Usyk is too much for him. [b]But my question is: are Usyk's blows so ineffective? He'd been hitting…

Hate him or like him, Whyte is very correct. Chisora mostly did not know what to do in the fight. It was as if there was no game plan.

[QUOTE=pollywog;20854631]Is Usyk ready to step up another notch and face Parker...Is anybody ? Lots of quacking amongst the heavies and not much else...[/QUOTE] Usyk must fight top guys, Joshua or Fury. Why wasting time with parker, if it is not…

[QUOTE=Tecnoworld;20853023]Chisora has a very poor technique, he goes forward and hits. But in this fight he even tried to jab sometimes. Simply, Usyk is too much for him. But my question is: are Usyk's blows so ineffective? He'd been hitting…