The two were in talks for a rematch on April 13 at Wembley Stadium in London, but the negotiations fell apart over money.

Now Joshua is likely heading in the direction of a showdown with unbeaten contender Jarrell Miller on June 1 at Madison Square Garden in New York City. 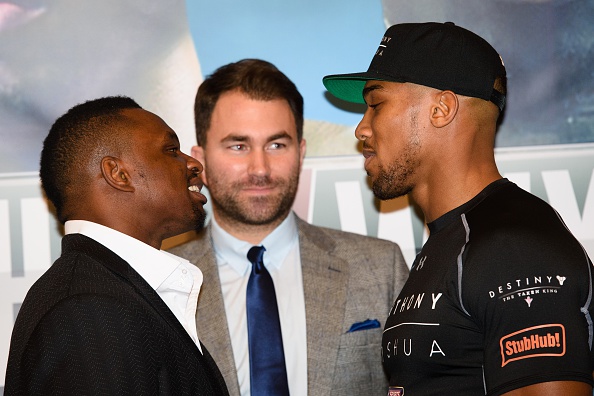 Whyte however, is going to return on a planned date of April 20 at the O2 Arena.

"I just want a fair crack of the whip, that's all. It's nothing to do with who's boss."

Whyte is now pushing to get in the ring with WBC mandatory challenger Dominic Breazeale. Should that scenario not happen, then Whyte would target Alexander Povetkin or Luis Ortiz.

Whyte wants to use Breazeale's status as the WBC's mandatory challenger to secure a direct crack at world champion Deontay Wilder.

He believes the WBC passed him over in favor of Breazeale.

"Hopefully we can fight Breazeale, and I'll get to knock him out, and I'll become WBC mandatory. The decision is meant to be made this week, or as late as early next week."

Whyte is also ranked in the number one spot by the WBO, but he could also be passed over in favor of Oleksandr Usyk - who could become the WBO mandatory challenger to Joshua if the undisputed cruiserweight champion moves up in weight.

"Who? No-one knows what that guy is," said Whyte. "Nothing surprises me in heavyweight boxing, nothing."

[QUOTE=_Rexy_;19494422]that would be a good debut IMO. Also, I believe both are with Matchroom.[/QUOTE]I forgot Hunter went with MatchRoom! Damn, I was hoping too see him vs. Ajagba, Kownacki, or Joyce! Oh well, maybe he gets his rematch with Usyk…

[QUOTE=imisupu;19492564]Why didn't we get Joshua/Wilder? Why no Joshua/Fury? Why no Joshua/Whyte 2? All 3 said the money was not fair. Hearn wants these guys to take flat fees that's not fair even Mayweather gave guys 60/40 or in Maidanas case…

Whyte is an idiot

[QUOTE=Bronx2245;19494360]I wouldn't mind seeing a rematch between Usyk and Michael "The Bounty" Hunter @ Heavyweight.[/QUOTE] that would be a good debut IMO. Also, I believe both are with Matchroom.