Eddie Hearn said the decision to switch the Dillian Whyte and Alexander Povetkin fight back to August 22 was to avoid a clash with Champions League football.

Hearn’s Matchroom team was set to announce the fight for a week earlier, only for Uefa, the European football governing body, to announce a shortened conclusion to the Champions League, which would have seen the pay-per-view event clash with the competition’s quarter-finals. 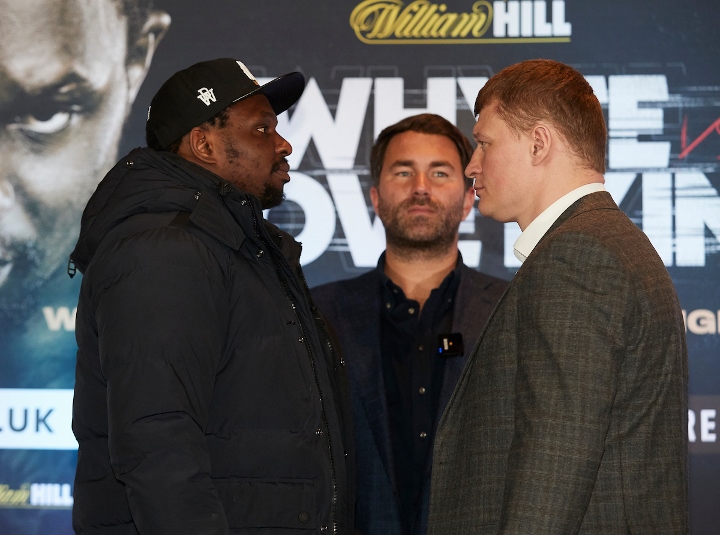 Now the Fight Camp series, which will take place in the garden of the Matchroom headquarters in Essex, will begin on August 1, headlined by Sam Eggington and Ted Cheeseman, with the Whyte-Povetkin fight headlining the fourth and final event four weeks later, with Katie Taylor on the same bill.

“We were always going to go on July 25 (for the start of Fight Camp), but it was always based around what was the best Box Office night for Dillian Whyte,” Hearn said.

“Then the Champions League came out and said they were going to go August 8 and 15… it was a bit of a kick in the nuts, because we were supposed to go August 15,” Hearn said. “We moved to August 22, which meant we could also do the first night (August 1) after the Premier League has finished.

“I think that flows nicely for us. It gives the whole of August for Sky to say boxing is back.”

The August 22 bill, which will be on Sky Box Office in the UK and DAZN in the United States, is headlined by Whyte-Povetkin, with Taylor defending her undisputed world lightweight title in the chief support. Also on the bill is a heavyweight clash between Martin Bakole and Sergey Kuzmin and a welterweight fight between Luther Clay and Chris Kongo.

A middleweight fight between Jason Quigley and Jack Cullen on the bill was scrapped when Quigley pulled out injured and Hearn said he has made an offer to Marcus Morrison to fill the gap. He also said he intends to add another heavyweight fight to the bill.

It means there will now be an August for Matchroom on both sides of the Atlantic, with the first Matchroom USA show now pinned down for August 15 and being announced next week. Hearn believes the fights could be better for having been put back a few weeks.

“I got to the stage where I thought ‘there is no rush’,” he said. “Fighters aren’t calling me saying they want to go Saturday.  They want the time to prepare for this now and the longer we wait, the easier the restrictions will be.”

[QUOTE=Mick Higgs;20635175]What do you think these over paid prima donna ponce's would do if they came up against the likes of Nobby Styles, Norman Hunter, Dave McKay & Vinny Jones?[/QUOTE] Honestly, they would walk off the pitch and refuse to…

[QUOTE=Angeljuice;20632986]I agree with that sentiment. The England team used to be warriors, coming back from a match bloodied and bruised with broken limbs. Since the Premier League began, the sport has got softer and softer, there are no characters in…

You're going to fight Hearns boy. Where? Hearns back yard. Do you really think so?

They'll probably both pee dirty and then fight anyway in an "I quit" match.