Whyte: I Would Maul Usyk All Night, He'll Struggle at Heavyweight!

Heavyweight contender Dillian Whyte is confident that he would batter and break down Oleksandr Usyk if they met in the ring.

On Saturday night, Whyte was ringside at Manchester Arena as Usyk likely took part in his last fight at the cruiserweight limit.

Usyk retained his WBO, WBC, IBF, WBA cruiserweight belts with an eight round knockout of Tony Bellew, who put in a much better than expected effort in the fight. 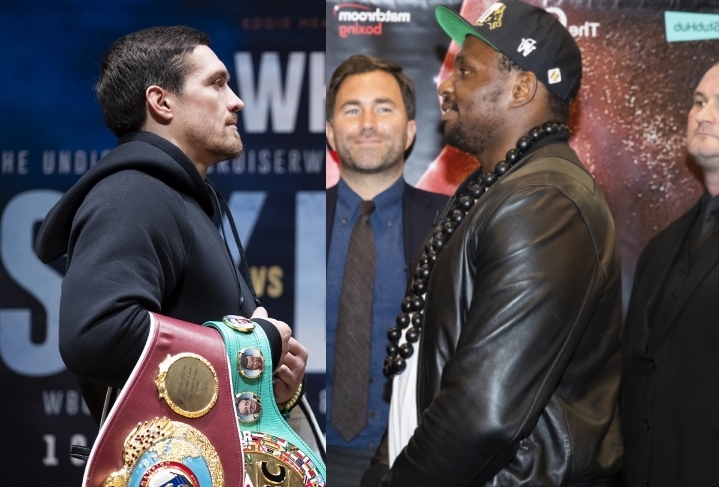 Usyk is now planning to move up in weight, to target all of the world titles at the heavyweight limit.

Whyte is back in action on December 22, when he faces Dereck Chisora in a rematch. A win could land the winner a crack at Joshua on April 13 at Wembley in London.

While Usyk was dominant at cruiserweight, Whyte does not expect him to be that superior at heavyweight.

"Heavyweights are bigger and stronger guys and they will manhandle him. If I fought him I wouldn't do what Tony Bellew was doing, I'd be charging at him all around the ring. He's not going to drop me with one punch. I would maul him all night long. I would fight him in a very uncomfortable zone for him. If it's a big fight and he wants it, he can have it. I'm game. If Usyk wants it he can have it. I'm the 'Can Man', like I say all the time. If you're a top-10 fighter, you can have it.

"I can never see him shock a real heavyweight, maybe his movement to some lazy heavyweight, but as a heavyweight, you close it down, nullify it, and beat him up, rough him up. You will out-weight him by two or three stones, so weigh him down, push him around. He didn't like a few things Bellew did, like hit him on the side of the head, and he was complaining, so I saw a few signs there that he doesn't like it rough."

[QUOTE=Muz;19270887]The fact I call out the propaganda put forth by the very racist LDBC bothers those like you, who need that reassurance, to feed a very fragile psyche and culture . You can cry all you want, you can make…

[QUOTE=Muz;19272777]Any man that needs to brag about his finances is either a flat out pretender or a very weak person of character. I'd guess you would be a little bit of both. You been called out before for your childish…

[QUOTE=Noelanthony;19271045]Maybe you are not even aware that you do it?? Of course you are you have been banned numerous times. Ask yourself why retard?? Everyone ignores you but I know your kind. You are surrounded by ethnic minorities and there…

Usyk is better than parker. Usyk is seen as some kind of produgy, whereas parker wasnt. Whyt he would do well to last 12 rounds