Whyte Completes VADA Testing Program - But Not Yet In The Clear

Dillian Whyte isn’t yet out of the clear but at least has some good news to share amidst recent controversy surrounding his latest in-ring victory.

The heavyweight contender from Brixton, England by way of Jamaica produced clean samples for his final pre-fight as well as his post-fight random drug tests with Voluntary Anti-Doping Agency (VADA) surrounding his July 20 unanimous decision win over previously unbeaten Oscar Rivas, whom also tested negative on both such occasions as well as throughout the testing period.

The final pre-fight test samples for both participants were collected on July 17 and the post-fight sample on July 21—one day after their 12-round interim title fight at London’s O2 Arena—according to an official VADA-submitted letter to both of camps, of which BoxingScene.com was able to view to confirm but is not presently in possession. 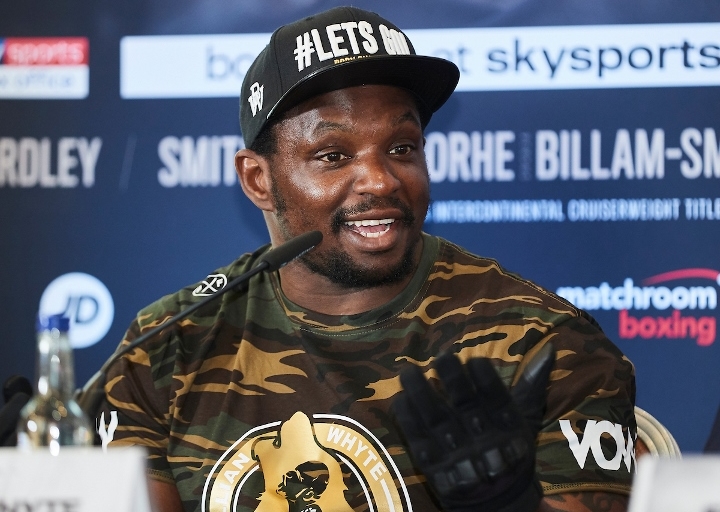 VADA announced on April 26 that both athletes officially entered its program, although how often each participant was tested has yet to be confirmed. VADA representatives declined comment to BoxingScene.com, as such information is intended to remain confidential.

While this piece of news gives Whyte reason to breathe a sigh of relief, it doesn’t yet clear up the latest controversy surrounding his latest victory. A breaking news item from BoxingScene.com contributor Thomas Hauser on July 24 revealed Whyte’s “A” sample that was collected and tested by United Kingdom Anti-Doping (UKAD)—under which all UK fighters are subject to random drug testing—during a random drug test in the second half of June showed trace amounts for two metabolites from the banned substance dianabol.

Because of the length in time it takes from conducting the same through test completion, results weren’t reported until July 17 upon discovery by UKAD to the British Boxing Board of Control (BBBoC) and to Whyte, who then advised his promoter Eddie Hearn, whose Matchroom Boxing presented the event.

Missing from that group was the other side of the main event. Nobody on Rivas’ team was informed of such findings until after reading the aforementioned first story submitted by Hauser on this very site.

Nor was Rivas’ side made of aware of a hearing that was held hours before their fight, where Whyte—who agreed to a hearing in lieu of requesting his “B” sample to be opened and tested, as such a process would have postponed his bout indefinitely—was requested to provide supporting evidence in order to be cleared for the contest. As has been repeatedly insisted by Hearn in professing his fighter’s innocence, Whyte was cleared to fight by the British Boxing Board of Control (BBBoC).

It doesn’t mean he’s in the clear.

The matter remains under investigation, in which such cases are opposite that of a traditional court hearing. Whereas you are presumed innocent until proven guilty in a court of law, drug testing cases require the offending party to prove his innocence.

Whyte’s contention that he passed all VADA tests was supported by the Las Vegas-based testing organization, confirming that Whyte and Rivas successfully completed the program. Any athlete producing a positive drug test conducted by VADA is automatically removed from the program and would have to re-apply.

The remaining question is how his late-June test with UKAD produced the lone adverse finding through 12 weeks of testing with two different agencies. Any such cleared tests from either agency would also have to fall within the timeframe the substance in question remains in the human system, which would support Whyte’s case.

Any such gaps would leave his team to further explain how the substance wound up in his system, as drug testing agencies are clear in the insistence that athletes are responsible for what enters their system, regardless of means of consumption.

Included among the recent developments was the rug being pulled from under Whyte’s feet in regards to a guaranteed future title shot. The top-rated contender—whose lone loss came to Anthony Joshua in their Dec. 2015 clash of unbeaten rising prospects—has served as the highest-ranked heavyweight contender in the World Boxing Council (WBC) ratings for more than 600 days heading into fight night.

The interim title at stake came with the promise of a shot at the full title—currently held by Deontay Wilder (41-0-1, 40KOs)—by no later than next May.

The Mexico City-based sanctioning body has since withdrawn its recognition of Whyte as its interim titlist, pending further review of his current drug-testing case.

Whyte previously served a two-year ban after the banned substance methylhexaneamine  was found in a collected sample from random drug testing surrounding an Oct. 2012 win over Sandor Balogh. The lengthy suspension was handed down despite sympathy among the review board for the claim to have ingested through energy drink Jack3D, which is now banned but at the time was legal to purchase in-store and which contains that substance.

Because that remains on his record, Whyte, 31, could face a minimum four-year suspension for his second offense in accordance with World Anti-Doping Agency (WADA) rules.

Editor's Note, August 1: The initial version of this article stated Whyte was not in the clear to fight just yet. A revision was quickly made, indicating that Whyte is not precluded from scheduling another fight.

[QUOTE=LacedUp;19963606]I don't know if you can anymore but you used to be able to buy it at your local GNC.[/QUOTE] Well yeah, what I mean is that you wouldn’t buy it and drink it there like you would with a…

[QUOTE=_Rexy_;19963515]Jack3d is a pre workout. Nobody is taking that at the supermarket unless they wanna sprint through the supermarket haha[/QUOTE] I don't know if you can anymore but you used to be able to buy it at your local GNC.

[QUOTE=LacedUp;19963490]You should understand that I'm saying there's a difference between a tainted substance and an illegal substance.[/QUOTE] I understand what you’re saying :)

[QUOTE=LacedUp;19961290]Yeah I know, but saying he took a tainted substance twice makes it sounds like he's making the same excuse twice, which isn't the case. He got a two year ban for taking a shake you can buy in a…

[QUOTE=Brettcappe;19961547]The issue isn't whether it is "legal" by law. The testing agencies have been preaching to athletes for years to do their research before ingesting anything. There are numerous "stimulants" that are legal but are banned substances. One example is…