Whyte: Andy Ruiz Can Overcome Diabetes, But He Can't Overcome Me

Heavyweight contender Dillian Whyte has fired back at some of the recent statements from former unified champion Andy Ruiz.

Last month at at Matchroom's Fight Camp in Brentwood, Whyte, who was the mandatory challenger to the WBC title, was knocked out cold in the fifth round of his bout with Alexander Povetkin

Povetkin, 41-years-old, was down twice in the fourth and appeared to be on the verge of getting knocked out himself - when he landed a huge uppercut to knock Whyte out in the fifth.

The loss eliminated a big stumbling block to a potential 2021 unification clash between Tyson Fury and Anthony Joshua. 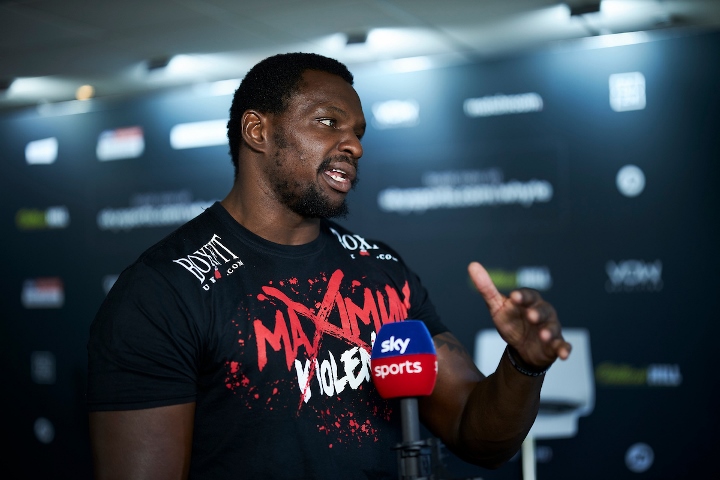 Whyte plans to exercise an immediate rematch clause, with his sole target being a second fight with Povetkin in the fall - possibly on a date in November.

Earlier this year, Whyte was aggressively pushing to get a fight with Ruiz, who had little interest in the bout.

They were featured on the same card in December, in Saudi Arabia. Whyte won a tough decision over Mariusz Wach on the undercard, while Ruiz lost a twelve round decision in his rematch with Anthony Joshua in the main event.

Whyte has been verbally blasting Ruiz since the start of the year - and taking numerous shots at his weight.

According to Ruiz, Whyte has been one of the most vocal trash talkers in the heavyweight division - and is now looking for sympathy in the wake of his knockout loss.

"Stop playing the victim card bro...You talk all this sh-t, disrespect your opponents at weigh-ins, post stupid memes and now we gotta feel sorry for you cause you got KO’d? Get the f--k out of here," Ruiz stated.

Whyte has responded, poking more fun at the body type of Ruiz and alleging that the Mexican boxer is fighting a serious medical condition due his weight..

"Andy Ruiz is glad that he don’t have to fight me. He’s glad the only battle he’s got now is just with diabetes. I’m not on him anymore, he’s glad. Diabetes he can overcome, but he can’t overcome me," Whyte said to IFL TV.

Hahahahaha you must be joking if you think Whyte will shut up after being KOed...lol. The dude still trash talks

Whyte's never faced anyone with the speed of Ruiz. Also depends on where the fight takes place. Ruiz has gotten too rich and lazy to train hard enough to be competitive in the near future. When the money starts to…

Ruiz lights up Whyte. They won’t fight anyway because Hearn knows that.